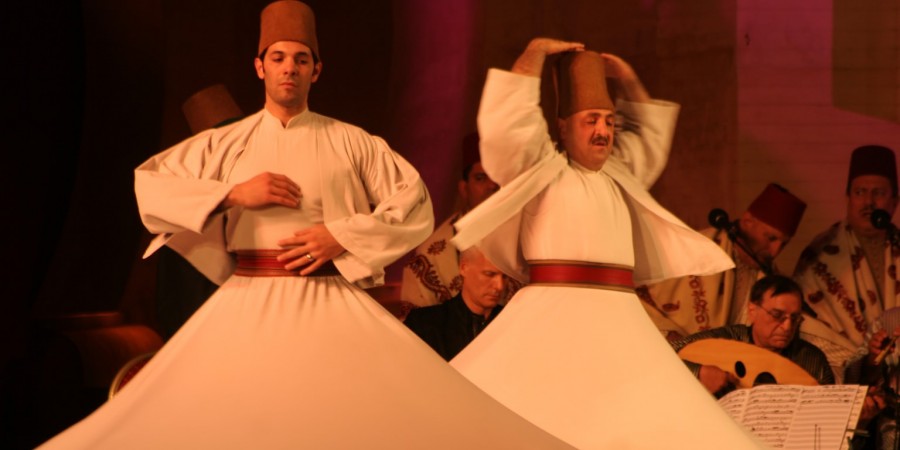 “It is our hope that evangelicals will soon come to see these two obligations—mission and interfaith engagement—not as mutually exclusive but rather as an opportunity to embody a holistic witness that bridges religious divides for the sake of ‘loving our religious neighbor as ourselves,’ through conversation, cooperation, and proclamation.”

+  from Matthew J. Krabill [MAT ’10], coeditor, Evangelical Interfaith Dialogue Journal [EIFD]. The journal creates space for evangelical scholars and practitioners to dialogue about dynamics, challenges, practices, and theology around interfaith work while remaining faithful to the gospel of Jesus and his mission for the church.
Whirling Dervishes [top] are a part of Sufism, a devotional/mystical sect of Islam. This photo was taken at the Fes Festival of World Sacred Music in Fes, Morocco.

INTERFAITH & MEMORY:  MELODY J. WACHSMUTH [MAT ’09]
“What role can dialogue play in reshaping identity with regard to the Other—whether it be crossing religious, ethno- religious, or ethnic lines? Instead of being permanently locked in war memories, injustices, or historically ascribed identities as one’s only association with the Other, a dialogical encounter can form new relational memories that can birth fresh possibilities for communal flourishing.”

INTERFAITH & RECOGNITION:  MOUSSA SERGE TRAORE
“The most relevant dialogue between followers of world religions is a sharing of the good things, the spiritual richness of each religion. The basis of interreligious dialogue is the recognition of what is true and holy in world religions. Dialogue is a means of recognizing the spiritual and moral values and the preservation of those good things found in the followers of world religions. To recognize, preserve, and promote the good things of each religion is the future task I see for interreligious dialogue.”

INTERFAITH & FRIENDSHIP:  CORY WILLSON [MDIV ’09], coeditor of EIFD
“What a person reads about Judaism from a book (or on the Internet) . . . should be considered secondary or background information when dialoguing with a Jew. That is to say, my Jewish friend and dialogue partner teaches me about his or her Judaism. This kind of experiential learning and exchange cannot simply be codified in books nor acquired in the academy alone. We need to hold together both of these aspects—of learning about other religions through books and research and from encounters with specific religious ‘others’—if our approaches to interfaith dialogue are to take into account the complexities of the religious experience of others.”

INTERFAITH & PROPHECY:  STEPHEN BEVANS
“There are times when dialogue needs to be the order of the day—when we are in situations where we cannot preach openly, when the best thing to do is to show our concern for people by learning their language and culture, by letting ourselves be nourished by the ancient wisdom of their spirituality. But there are other times when we must speak a word of prophecy—when people who have become fascinated by our joy in Christ ask us to tell them more, when in dialogue we share our innermost convictions, when a situation of injustice impels us to denounce the evil that is keeping people in a dehumanized state. The practice of mission is a continuum, with dialogue on one side and prophecy on the other. Only the context, only the situation, can tell us when dialogue is more in order than prophecy, or when prophecy emerges out of dialogue.”

INTERFAITH & PRAYER:  JULIJANA MLADENOVSKA-TESIJA
”I had come to the mosque with an interfaith group of students from the Orthodox Faculty in Belgrade, Serbia, several Catholics from Osijek, Croatia, some Muslims from Bosnia, and Protestants from Osijek. I asked the Imam if he would melodically pray for us in Arabic. He smiled, then paused, and said, ‘I will gladly, if you will pray, my dear sister, as well.’ I was shocked and suddenly overwhelmed by a strange feeling of happiness. I heard myself praying inside, ‘Oh Lord, You guide me!,’ and responded loudly: ‘I will, if my Orthodox brothers and sisters pray as well.’ They were silent for a moment, then started whispering between themselves and replied: ‘Can we sing, an Easter song, for Christ? And then pray? But only if our Catholic brothers pray too.’ The Catholics smilingly nodded and suddenly, the small mosque was filled with four different prayers.  . . . It was amazing.”

INTERFAITH & CONVERTS:  SCOTT SWARD [MAT ’07]
“Of course, interfaith dialogue remains of critical importance.  Our Buddhist, Hindu, Muslim, Sikh, and Jewish friends have much to teach us. More than that, if we don’t understand their beliefs, values, hopes, and fears, how will we ever make the gospel intelligible to them? At the same time, we must also listen carefully to Christian converts from these religions. They have much to teach us too. Their beliefs may grate against our sensibilities, or challenge our deeply held assumptions. But, perhaps, that’s exactly the reason we ought to pay even greater attention to what they have to say.”

INTERFAITH & TRUTH:  TERRY C. MUCK
“The challenge of being a faithful public Christian in a  twenty-first-century Western context is to be able to balance cooperation with people of other religious traditions with a commitment to the truth—the exclusive truth of the gospel of Jesus Christ. I do not use the word challenge lightly. Balancing cooperation and commitment is not a particularly easy task. But it is what we are called to do and be.”

INTERFAITH & DIFFERENCE: VELI-MATTI KÄRKKÄINEN,  professor of Systematic Theology
“In order for the dialogue to be meaningful, it takes both commitment to one’s own beliefs and openness to listen carefully to the Other. A true dialogue does not mean giving up one’s truth claims but rather entails patient and painstaking investigation of real differences and similarities. The purpose of the dialogue is not necessarily to soften the differences among religions but rather to clarify both similarities and differences as well as issues of potential convergence and impasse. A successful, fruitful dialogue often ends up in mutual affirmation of differences, different viewpoints, and varying interpretations.”

INTERFAITH & NATIONALISM:  KOSTAKE MILKOV
“In an interview I did with evangelical leaders in the region concerning [contemporary issues in the Balkans], the vast majority asserted that one of the most effective principles of witnessing to Muslims is the fact that, in contrast to the traditional mainline confessions such as Catholicism or Orthodoxy, the evangelical movement is transnational. In the face of growing nationalism and ethnophyletism (the combination of church and state) in the countries of the region, it becomes increasingly obvious that overcoming such forces is essential for the development of Christian witness.”

“A Christian who participates in dialogue with people of other faiths will do so on the basis of his faith. The presuppositions which shape his thinking will be those which he draws from the Gospel. This must be quite explicit. He  cannot agree that the position of final authority can be taken by anything other than the Gospel—either by a  philosophical system, or by mystical experience, or by the requirements of national and global unity. Confessing Christ—incarnate, crucified and risen—as the true light and the true life, he cannot accept any other alleged authority as having right of way over this. . . . Jesus is— for the believer—the source from whom his understanding of the totality of experience is drawn and therefore the criterion by which other ways of understanding are judged.”

+ from Lesslie Newbigin in The Basis, Purpose and Manner of Inter-Faith Dialogue. He was the focus of Fuller’s 2014 Annual Missiology Lectures hosted by the School of Intercultural Studies and dean Scott W. Sunquist, [top left].

“A renewal process and reconfiguration is occurring wherein long, historical and common roots, both musical and liturgical, are engendering a revival of heritage that addresses contemporary realities among highly religious peoples. Where barriers between people have come to exist, they are being torn asunder through musical performance of common musical spaces that allow them to come together in new ways. Music events provide a safe space and liminal moments for people who have been enemies to find something in common. As the music proceeds into this affective emotional space, you get new synapses, and you start to see your enemy as your neighbor.”

+ Roberta King, associate professor of communication and ethnomusicology, in the introduction to her documentary and book project [un]Common Sounds. She is pictured [top center] with musicians from the Songs of Divine Love: An Islamic/Christian Spiritual Concert held at the Songs of Peace and Reconciliation Beirut Colloquium in Lebanon, 2009. songsforpeaceproject.org

“It’s important that all dialogue with persons of other religious groups not be merely a strategy for evangelism. We mustn’t set these relationships up in such a way that our efforts will be a failure if the relationships don’t develop into evangelical opportunities. . . . One need not be a ‘relativistic dialoguer’ to want Muslim children to be free from harassment as they walk to school. Christians ought to care about these things, quite apart from questions about evangelistic opportunities. Whether the persecuted people are Buddhists in Vietnam or the Bahai sect in Iran or Jews in Poland or Baptists in Cuba, we need to speak out against injustice and oppression. And interreligious dialogue can often help us gain the appropriate information and sensitivities.”

+  Richard J. Mouw [top right], Fuller professor of faith and public life and past president of Fuller, in his classic text Uncommon Decency: Christian Civility in an Uncivil World

“Love is not afraid of conflicts.”

“I have lived with the Muslim community in the Parisian suburbs for decades. I have experienced the tension and interacted with conflicts in some neighborhoods; I have seen the despair and the ghettoization. I have also experienced strong and genuine relationships with Muslims who have expressed so much care and hospitality toward me that I was sometimes ashamed that Christians were not attending to them with similar generosity. To me, neighborly love is necessary to address the tough issues: the lack of justice, freedom of religion, social conflict, religious dissonance, and acts of terrorism. God chose the way of love and the way of entering into relationship with us through Christ in order to address these very same challenges. His example reveals that love is not limited to words—it should also be experienced in real relationships, with ups and downs and patient negotiations. This love is not afraid of conflicts that are naturally embedded in human relationships.”

+  from Evelyne A. Reisacher, associate professor of Islamic studies and intercultural relations, in her speech “Uniqueness of Christ and Muslims in Europe” at the Lausanne European leaders meeting in Switzerland, 2014

Israel’s Messiah and the People of God: A Vision for Messianic Jewish Covenant Fidelity
Mark Kinzer and Jennifer Rosner, eds. (Wipf and Stock, 2011)

Hospitality and the Other: Pentecost, Christian Practices, and the Neighbor
Amos Yong (Orbis, 2015)

Christian Engagement with People of Other Faiths with Diane Obenchain

Introduction to Islam with Martin Accad

Models of Witness in Muslim Contexts with J. J. Travis