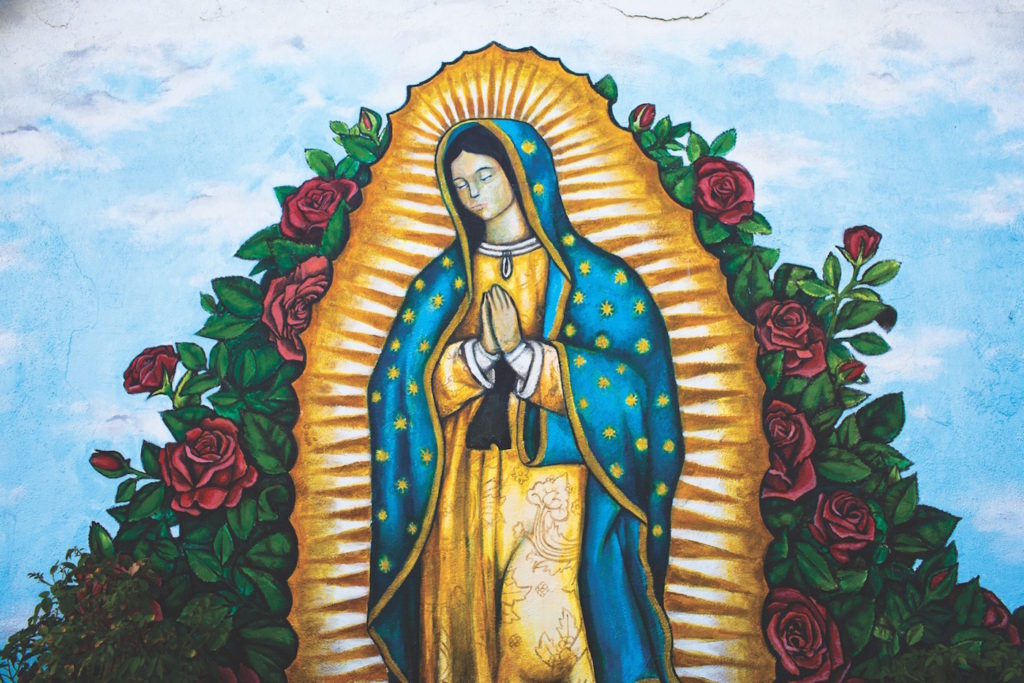 Her face reflecting the digital glow, a teenager studies a projection of an oil painting by Canadian artist Tim Okamura called Courage 3.0. The teen’s eyes flicker over the image of a young Black woman clad in a man’s undershirt, coming to rest on the bundle cradled in the woman’s arms, a baby concealed by the lush folds of a blanket. Seated in a classical portrait pose in front of a graffiti-covered wall and crowned with a halo, the mother holds her chin high as her gaze points toward a distant horizon. The teenager, a young mother herself, finally describes what she sees: “To me, the way she’s looking, I see that the future is in her head.”

“Motherhood is so much more than just a physical relationship between a parent and child,” Fuller doctoral student Joyce del Rosario says. She sees something mystical in the bond that witnesses to the nature of God, especially in untraditional kinds of mothers and unique depictions of them.

From Seattle, Washington, Joyce was raised in a bustling Methodist home surrounded by her extended Filipino family. “Growing up, I had random people in my home all the time,” Joyce remembers, recounting stories of Filipino aunties and distant cousins, everyone sharing responsibilities: men and women, across generations and blood ties. Joyce’s family was always growing and changing shape, giving her broad definitions of hospitality and community.

During her nine years on staff with Young Life, Joyce began to think about starting a family of her own as a foster parent. “Even if I was only able to house a child for a couple of weeks,” she felt, “those would be two weeks that child would be safe and warm and loved.” Though Joyce didn’t become a mother in this exact way, she began spending her weekends volunteering at a residential home for teen moms in the Bay Area of Northern California. There, she became captivated by the stories of the young women under her care. 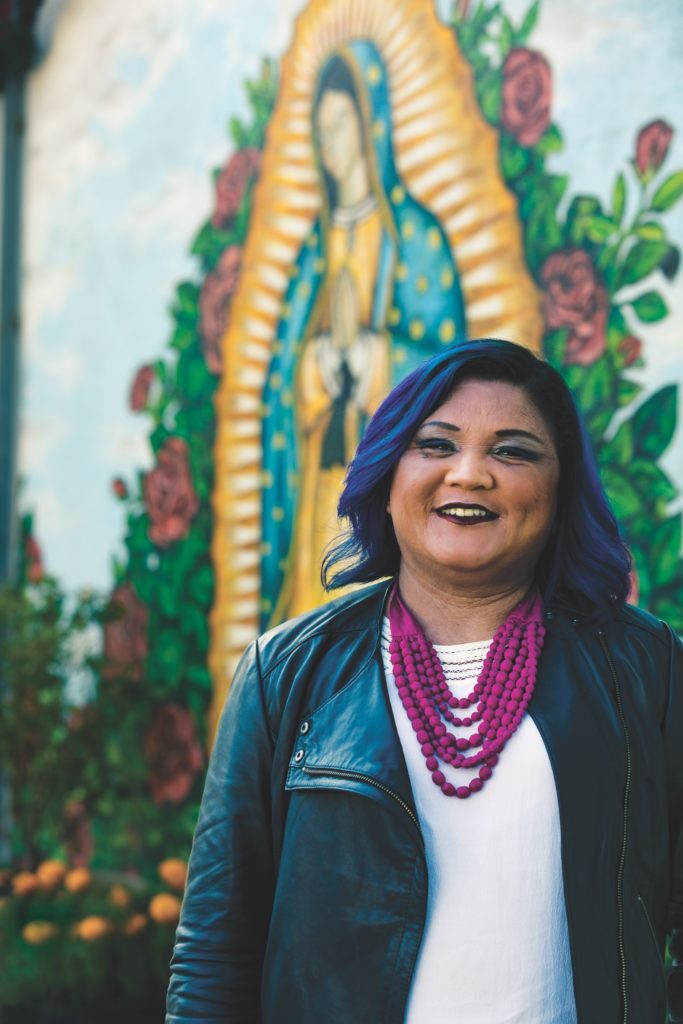 To Joyce, these young women’s likes and dislikes, their family and immigration histories, their schooling, even their relationships to local and national governments were much more than mere details about their backgrounds or factors that may have contributed to their young motherhood. These were precious aspects of these women’s identities—and of their children’s identities—that Joyce saw as essential to understand and honor if she was going to minister to them well.

Some, but not all, of the young women had been virtually abandoned by their families and their partners. From varied socioeconomic backgrounds and ethnicities, they were in high school or working their way through their pregnancies, growing bellies tucked into the teenage uniforms of hooded sweatshirts or sundresses from the mall. No matter their circumstances, Joyce helped these young moms-to-be pack their hospital bags and prep their birth plans, ready to rush to the maternity ward at any hour of the day or night.

Joyce became the director of that home, a position she held for four years. Much more than the two weeks at a time she initially imagined spending as a foster mom, “I didn’t realize God would give me five years of foster parenting and grandparenting with I don’t even know how many families!” There were so many different kinds of motherhood, Joyce found, her own experience of fostering through leadership not least among them.

When Joyce decided to pursue doctoral work in Fuller’s School of Intercultural Studies, she transitioned out of her work with the teen mom home to move to Pasadena. Yet those young moms she cared for so deeply, along with the Filipino aunties and so many others who influenced her own upbringing, stayed in the back of her mind. She progressed through her coursework with only a general idea of her research interests until one day, in a missiology seminar discussion, she became passionate about the idea that Protestants need to broaden their conception of and ideas about Jesus’ mother, Mary—and that this could have powerful implications for ministry. David Scott, Joyce’s advisor, saw the light bulb go on for her.

“That’s your dissertation topic,” he told her—and she agreed. Recalling the insights her teen moms had about their responsibilities to their children and their position in the world, she wondered about the connection between the narratives of young moms, often the intended recipients of Christian outreach, and the unmarried, teenaged Mary, who was God’s own vehicle of outreach to all humanity. “We forget that Jesus first came to a teenage girl who was socially, economically, and even legally vulnerable. God chose to enter into community with Mary first,” Joyce says.

At her advisor’s encouragement, Joyce revisited her teen moms and others in the Bay Area to probe their responses to images—icons, many of them quite nontraditional—of the holy family. Indeed, images of Mary had the potential, Joyce found in her research, to evoke teenage reflection on more than just maternity, inspiring questions about culture and romance, the past and the future.

Shown an orthodox icon depicting Mary with large, lashless eyes set in a long face and with covered hair—was that a knit beanie tucked under the old-fashioned robe?—teenaged moms wondered about this mother’s apparent lack of femininity, giggling about the “dad way” she held baby Jesus. And speaking of dads, where was Joseph? Not all teen moms are single, but Mary often seemed to be.

Responding to a traditional portrait of the Virgin of Guadalupe, a Mexican American mother recalled a shift in the way she saw Jesus illustrated when she became a Christian and began attending a nondenominational church, where instead of having golden brown skin, Jesus was often decidedly white. But this painting of the Virgin draped in the star-studded emerald green traditional in Mexican Catholic imagery, radiating light with a whole-body halo, reminded her of the holy families of her childhood with flowing dark hair and bedecked in rich textiles.

And contemporary paintings like Courage 3.0 both illustrated the teens’ upbringings and spoke prophetically to their hoped- for futures. One young woman saw the way her own parents raised her to envision a future outside of their impoverished neighborhood, as well as the hope she had for her own child: “They would always take us to places where they knew it was not typical for people who live in a poor city to be,” the teen recalled. In Okamura’s painting, she felt, “it just looks like they’re going places with the confidence she has. That background has nothing to do with her life, even though she lives there.”

Joyce’s research questions elicited honest, confessional responses through visuals alone, responses about what it means to reimagine one’s self as a parent in the context of high school, or without a partner, or without a home—what it means to venture on a new path, perhaps alone, brimming with new love and still unsure of what might come. She works toward a holistic Protestant vision of Mary, bringing that to bear on ministry o teenage mothers. What might happen, Joyce wonders, if churches remember Mary in their ministries to young mothers with unplanned pregnancies? How many more conceptions of the holy family might we imagine, helped both by real-life stories of today’s teen moms and by rich, diverse imagery of the many different kinds of motherhood?

“Context matters,” Joyce says of working toward truly compassionate ministry to the unique needs of young mothers. Using what she’s discovered in the teens’ connections to the paintings, she wants to foster ministries to both privileged church communities and the neighborhoods they seek to serve. Through images like Okamura’s, Joyce encourages congregations to creatively handle the tension of welcoming new life and family bonds that might seem out of place. And through such images, those privileged church communities might come to see a Mary that’s quite different from the white young woman so many picture her to be: she might be any ethnicity, and she might just be wearing a beanie under that robe.

The young moms Joyce interviewed recreate versions of the holy birth narrative independent of the biblical text and true to life—and true, Joyce says, to God’s redemptive vision accomplished through an unmarried mother. They just needed images they could identify with and aspire to, ones that illustrate the best of what they see in themselves and their babies: “strong, resolute, and fearless of what the present and future holds,” according to Joyce. As one of the young moms said: motherhood is holy, and “a hopeful picture.” 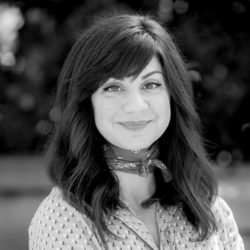 Rachel Paprocki (MAT ’14) is the manager of Fuller’s Writing Center.