Most people want more from their lives than they have. In their encounter with each other, with various cultural goods, and potentially with God, people are always trying to move beyond simply making a life for themselves to making a good (or beautiful) life. They want to rise above a merely functional way of living, in order to “make something lovely” of their homes or their families—or at least that is their hope. The impulse to move beyond the immediate situation in which we find ourselves is built into what it means to be human. My reason for saying this is theological: This movement that is embodied in our desires and fears, in our feeling for what is around us, reflects God’s purposes for us, and finally, is meant to move us to love and worship of God. By virtue of being created in God’s image, I would argue, human beings are responsive agents. Emil Brunner in fact describes the “image of God” in which Genesis says humans are created in terms of “responsibility” or, literally, their respond-ability.1 It is our very ability to feel emotions that moves us toward or away from people and situations—part of an intricate set of dispositions that make up the fundamental structure of our spiritual lives.

But these responses are appropriate, and effective, because they answer to the way the world around us is constituted. We are drawn toward people and situations for a wide variety of reasons, of course, but we are especially attracted to those things which are textured in attractive, figured ways. Human life is lived, so to speak, in a charged field of moral and aesthetic values to which we respond, and, finally, in terms of which we forge an identity.

But how does one break out of the merely practical level of life toward what I am calling the poetic sphere? Here M. M. Bakhtin can be of help. He describes the way the novel has developed in the modern period as that genre of literature radically charged with temporality.2 Within this zone of the radical present the discourse of the novel has emerged. In the storied context of the novel the individual is faced with inconclusive events and radical contingency, and the reader wonders what the protagonist will make of all these disparate events and situations. He is called, Bakhtin says, to acquire “the ideological and linguistic initiative necessary to change the nature of his own image” (38). But the problem is that the poetics of the situation are locked away, subordinated to what Bakhtin calls the “bounded image” (50).

In Search of “imago dei”

The imago Dei, or “image of God,” is a theological doctrine asserting that human beings are created in God’s image and have inherent value—first, as his own self-expression, and second, as the object of his love. The biblical basis for this is Genesis 1:26–27: “Then God said, ‘Let us make humankind in our image, according to our likeness; and let them have dominion over the fish of the sea, and over the birds of the air, and over the cattle, and over all the wild animals of the earth, and over every creeping thing that creeps upon the earth.’ So God created humankind in his image, in the image of God he created them; male and female he created them” (NRSV).

People, in other words, become stuck in routines and roles which are intrinsically unsatisfying, but which they seem powerless to change. The career waiter had always hoped to break into acting or return to school, but never manages to do so. How does such a person break through to the poetic? Bakhtin argues that there are two factors which have been decisive in the development of the novel and which are essential to creating the dialogical situation in which this change in image becomes possible. These are laughter and polyglossia. The former allowed people to parody every genre, which in turn “freed consciousness from the power of the direct word” (60). Laughter, in other words, becomes a weapon against the world as taken-for-granted. In the latter, polyglossia, struggles between and within languages, high and low, foreign and domestic, were able to “mutually illuminate one another” (76). Bakhtin believes this dynamic situation of parody and the clash of voices de-centers everyday life and makes change possible. He concludes: “The dialogic orientation of word among other words (of all kinds and degrees of otherness) creates new and significant artistic potential in discourse . . . which has found its fullest and deepest expression in the novel” (275).

Notice that it is in the exchange between the various languages, an openness to which was made possible by laughter, where change takes place. But note further that it is not simply any alternate voice, but voices, as Bakhtin puts it, which have been canonized, that are shaped into artistic images, that truly make change possible (417–22). These images, in the form of artistic classics, grow and develop over time and continue to do their work on the imaginations of subsequent generations. Such classics embody parody and dialogic encounters that enable and stimulate a change in images.

This suggests that novels, and other embodied images, can provide alternative narratives, which can open up the experience of the reader in a way that make change possible. In the very clash, or dialogue, of languages one can “see” some new way of making a life. But does seeing a new way to live imply that a new life is really possible? It turns out that this is precisely the claim that the Scriptures make about all of life’s little stories—change is possible, but not guaranteed. Seeing oneself in terms of the alternative voices of Scripture, as loved by God, suggests one might actually become something different, perhaps something better and more attractive. Scripture includes the dialogue of voices that add to its power and influence. Moreover it is clear that part of the attraction of this narrative is its figural and narrative form—its stories and images. Augustine recognized the power of these intertextual dimensions of Scripture when he noted:

[It] is much more pleasant to learn lessons presented through imagery, and much more rewarding to discover meanings that are won only with difficulty. . . . It is a beneficial thing that the Holy Spirit organized holy scripture so as to satisfy hunger by means of its plainer passages and remove hunger by means of obscurer ones.3

Augustine, the poet and the preacher

“So when advocating something to be acted on the Christian orator should not only teach his listeners so as to impart instruction, and delight them so as to hold their attention, but also move them so as to conquer their minds.”

—from De Doctrina Christiana, Augustine of Hippo, 354–430, philosopher and theologian, considered one of the most important figures in Western Christianity.

All of this contributes to the promise of Scripture that transformation of the reader is what God intends, and works to accomplish. But how does this relate to the goods that cultural wisdom has handed down, specifically the classics of literature and art, to which Bahktin is referring? Here I will make two interrelated claims. First, because of the way the world is made and God’s continued presence in that world, and because human agents are made in the image of God, cultural products—when they are good and true—can move people toward God. They can, as it were, echo and even facilitate the movement of the soul toward God that is described in the Christian narrative. But second, because of the broken nature of that creation and that agency, a simple encounter with an alternate voice, or even the imaged dialogue of voices, cannot result in any genuine transformation. Even the freedom from a life-taken-for-granted that laughter allows and the attraction of alternate stories do not, in themselves, make people better. But because God is at work in this process, the potential is there.

But how do we understand this presence of God? In conclusion let me suggest two elements critical to the development of a theological aesthetic. First, even though it is true, as Scriptures claim, that God’s beauty shines through the created order, and that Christ upholds the order, we do not have direct access to God through this beauty. Powerful works of art, just as other objects of desire, can become a step in the journey that leads to God, but they do not constitute a witness that is unambiguous. The reason for this is Paul’s assertion that though the very heavens declare the glory of God, humans suppress and distort the truth we feel, and do not honor the one to which this witnesses (Rom 1:18, 21). Later, in Romans 7, Paul, from his own experience, testifies that when he tried consistently to live a beautiful life, he found that he was unable to do so. This does not make the perception, even the attraction of beauty (and the figural shape of poetry) less important, but it does mean that its role must be incorporated into a larger narrative of journey and conversion.

The problem is not only the nature of the brokenness of our vision and the world, but also the historical and progressive nature of faith. It is always possible to relate to the claims of objective beauty “despairingly” as Kierkegaard put it. That is, we forget that the self is a call and a process of becoming, by faith in God’s grace and leading. We can misuse the call of beauty. Contemporary deviations in the pursuit of aesthetics seem to specialize in celebrating an essentialized self in the aesthetic moment, forgetting that the self is formed over time by a process that necessarily involves faith in some form or other. The Christian life of faith is not simply an event, or an illumination,4 it is a growing up into Christ in all things (Eph 4:14–15), through the historical exigencies that a person necessarily encounters. It is a breaking through to a larger shared knowledge about things lived out and not simply observed. Essential to this process, however, are moments of delight and beauty that, as Bonaventure put it, are movements of the soul toward God.

4. In this way Nebel’s description of the Protestant tendency to understand aesthetics as an event rather than a substance is misleading, and therefore Balthasar’s dismissal of it premature. See The Glory of the Lord: A Theological Aesthetics, trans. Erasmo Leiva-Merikakis, vol. 1 (Edinburgh: T. & T. Clark, 1982), 64–70. Aesthetics must be understood as incorporated into a larger process of becoming like Christ.

This article was published in Theology, News & Notes, Spring 2010, “Human Flourishing: Reflecting the Abundance of Creation.” 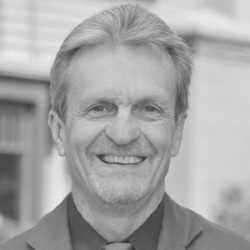 William A. Dyrness, PhD, professor of theology and culture at Fuller Seminary since 1990, served as School of Theology dean (1990–2000) and is a founding member of the Brehm Center.