Aaron Moore’s books seem so out of place at the Victor Valley Transit Authority that his coworkers renamed his office “the library.” Books on philosophy and “the beauty of the infinite” lean next to transportation manuals, a collection of ancient Near Eastern pottery sits on the shelves above his computer, and a Bible lies open on the desk. Aaron enjoys the curiosity of his colleagues, since it often turns into an opportunity for conversation about subjects that give his work meaning. “When we get to questions of ultimate value,” he says, “I can often talk to them on a deeper level in ways they hadn’t thought about before.” What does theology and philosophy have to do with transit planning, they ask? Aaron looks around his office and answers—everything.

As a student at Fuller, Aaron [MAT ’11] had plans to be a professor. Obsessed with theology and philosophy, he spent most of his time in the library, preferring reading to friendships with his peers or professors. He soon realized, however, that Fuller wanted to make him “a whole person,” and that the community around him expected him to integrate his books with real relationships. “Academics is a valuable pursuit, but I started to see I was using it to prove my importance and self-worth,” he recalls, instead of being present with others.

Around that time, Aaron took a missiology class with Bill Dyrness, professor of theology and culture, that reoriented the way he understood vocation: “He taught me that ministry is about opening up opportunities for people to see God’s love rather than bringing anything to them,” he says. It was an important shift—rather than serving others out of his own strength, Aaron was learning he only had to be present, look for opportunities, and join in. After the class, he decided to balance his studying by volunteering at Fuller’s food bank, a weekly food distribution service for the local Pasadena community. It was a step toward “impactful, relational ministry” that would come to shift the momentum of his life.

Every week in the parking lot next to Carnell Hall, the hands that turned the pages of theology books also learned to sort vegetables and day-old bread. “Volunteering at the food bank pulled me out of just being a student of theology and into becoming a practitioner of my faith,” he remembers. “It was an important place where we could treat people with dignity even at their most vulnerable time.” As he befriended regulars at the food bank, it wasn’t long before he noticed a pattern as to why they sometimes didn’t show up. When people missed a week, they almost always had the same reason: they couldn’t afford the transportation to get there. Their absence troubled Aaron and became an epiphany: “Services don’t matter if you can’t get to them.” Helping people get access to services they needed could be its own form of ministry, he thought, and if people were falling through the gaps in a densely populated city like Pasadena, Aaron wondered about the area he came from in California’s high desert, where cities were sparse and the distance between them even wider.

He started researching transportation services and, when he graduated, found a job near his hometown. “I didn’t plan on this, but I saw a community in need and thought I could help,” he says. He started work as the director of consolidated services at the Victor Valley Transit Authority, serving people living in the small towns scattered over the high desert northeast of Los Angeles. With so much empty space, the arid landscape creates unique problems for people who can’t travel across it, and it became Aaron’s job to look for creative solutions. “We’ve all been at that point where we don’t have a functioning automobile, but some people are in that place without any friends or family, so they’re locked into isolation,” he says. “We’re trying to create options in rural communities where they otherwise couldn’t get to public transportation.”

Under Aaron’s direction, his team has donated cars to churches and nonprofits who then use the vehicles to connect people to health care, after-school programs for children, or even church services on Sunday. They have developed a driver reimbursement program that refunds costs to volunteers who drive others in the community to appointments and other services—a program with the added benefit of encouraging neighbors to meet one another. “We’re trying to get people engaged in their communities, and that’s one reason I love the volunteer driver program,” he says. “It helps them get to know their neighbors, and after a while, people begin to become friends.”

When one patient was late to a doctor’s appointment, he remembers, the volunteer driver went inside to advocate for him; transportation became a means for supporting a friend in need. For another, the transit service not only helped her make her appointments, it decreased debilitating anxiety so she could have a better quality of life at home. When Needles, California, lost a 99 Cent Store and Dollar General—the only source of inexpensive food for many—Aaron’s team developed a rideshare program so that families could carpool to nearby towns. Even though the costs were low, they discovered people couldn’t pay for the service, so they developed financial cards that worked not only as payment for ride-sharing but also as a solution to banking needs. “Seeing the community receive that added benefit was satisfying,” he says.

Running errands, shopping, and doctor visits are “basic things we take for granted, but they’re things people can’t do without transportation,” says Aaron. Without access to transportation, people find that struggles with seemingly unrelated social issues become exacerbated. The longer he’s worked in this field, the more Aaron has realized that transportation is at the center of many community challenges: poverty, mental health needs, isolation, health care access. “In ministry, of course you want to spread the gospel, but you also want to care for the physical needs,” he says, sharing a conviction that came from studying neuroscience and the soul with Warren Brown, professor of psychology, and Nancey Murphy, senior professor of Christian philosophy. “This world matters. Bodies and the needs of bodies in this world matter.”

As the programs have grown, Aaron has started presenting at council meetings and other nonprofits to share what he’s learned and to advocate working together to build a “web of services” for the community. Ultimately, the value of these transportation services is more than just lending vehicles or creating new programs. For Aaron, it’s about creating access to services that strengthen communities and help people live meaningful lives.

Few people set out to work in public transportation, he points out. “Most of my team started out doing something else, but we saw a community need,” he says. “I know I’m doing exactly what God has called me to do even though I never anticipated doing it.” Looking around at his books, he knows the transit office is precisely the place to bring theology and relationships together. “Reading Mark Labberton’s book Called was confirmation of my choice,” he remembers. “It was an affirmation that Jesus wants us to function and work in a practical manner to meet people’s needs and show them his love.”

Driving across the desert, praying with a coworker in the break room, reading Scripture in his office—they’re landscapes converging into a single mission field Aaron is grateful to traverse: “I see my work as an expansion of Christ’s body and the church. It may be an impossible vision, but I want to see a day when everyone can get to where they need to go.” 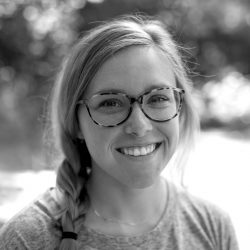 Katy Cook is FULLER studio's graphic designer and photographer for FULLER magazine. Her work can be found at katycook.co.