Something drives you. Is it love? Pride? Are you passionate for other people or for yourself? Are you holy? Are you haunted? Are you chasing something, or are you being chased? In the morning when you wake up, you swing your feet from the bed to the floor, and at night you hesitate before you swing your feet back into that bed – why? What keeps you going, or rather, what makes you go?

Drive is a gripping thriller about a man who goes to violent extremes to save a woman and her son. He speaks only when absolutely necessary, trusting others to say the things that need to be said and implicitly asking others to trust him to do what needs to be done in the complicated situation in which they are all caught.

The driver is a capital “h” Hero, or at least he seems to think of himself that way. He is skilled in the manner of our most storied movie action stars. He drives and he kills with practiced efficiency. He possesses that quality which is most cinematic – he acts, and he lets his actions prove his quality. Once his actions are complete, he fades to black, confident in the effectiveness of his actions for his audience. Ryan Gosling is great in the role, mixing Steve McQueen’s brash charm and Clint Eastwood’s calculating stoicism and overlaying them with Anthony Perkins’ unsettling grin. 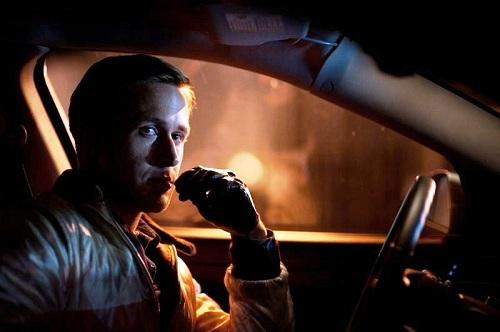 Drive is so cinematic that the only way to describe it is to liken it to other films. It is a Western like Sergio Leone’s spaghetti westerns about a man with no name and an unknown past who is forced to perform acts of violence to save the ones he cares about. It is a psychological thriller like Martin Scorsese’s Taxi Driver which methodically examines the actions of a man with a hero complex who takes it upon himself to rid his world of villainy. It is a slick, urban action flick like Michael Mann’s Collateral, a pulsating mix of light and sound just like the streets upon which our hero is most at home.

Drive is an aesthetic tribute to the flashy bravado of the 1980s, a trait most easily seen in its graphic style and heard in its soundtrack, but also embodied in the overly romanticized optimism of its characters. They all believe that their wildest dreams are possible, and their individual pursuits of those dreams hasten the end of their individual stories and in some cases, their lives.

I do not doubt that there is a complicated psychosis beneath Drive‘s stylized exterior, but that veneer proves all but impenetrable. Like its hero, Drive reveals nothing of what it is about. The film simply moves and asks its audience to respond.

I see in the driver a man consumed with the idea of being a hero. He recites his practiced speech to would be employers. He stunt drives for the movies. He takes it upon himself to save a married woman and her son to whom he has pledged implicit fealty. He is a modern knight errant, a rogue samurai, a gunslinger obeying his own personal moral code. The only recompense he asks from the world is a single kiss from the woman for whom he is willing to give his life. I see in Drive a man driven by pride and the pursuit of personal glory. He wants to win, for others to know he’s won, and then to drift off into the night where he can maintain his aura of humility and selflessness.

In saying that, I think I am revealing more about myself than I am revealing about Drive. I so often want to be “the guy.” I act independently. I pursue noble action for the sake of being noble. I fight windmills. I am self-sacrificial in ways that will bring me esteem from the ones whose love I covet. I eschew the spotlight, because I would hate for anyone to know about the pride which deep down motivates my assumed selflessness.

The viewer gives Drive its soul as he or she enters the theater and enters into the story. Drive is simply drive. The viewer decides where he or she is ultimately taken. Drive is image and sound and movement. It is all style but in the best possible way, like clothing draped on a mannequin in a department store window, available to be worn at will by anyone brave enough to try it on for size.