Cathy and I are back from our sabbatical time in Spain where I was writing a book on theology and film. When Cathy mentioned what I had been doing to her colleagues on the Board of World Mission for the Evangelical Covenant Church, Dr. Richard Trinity thought I needed help with a title for my book (I do). So he used his idle moments during the board sessions to draft some options. “Jesus Goes to the Movies.” “Popcorn Christianity.” Flicks and the Faith.” And “The Eyes Have It.” Unbeknownst to Richard, there already is a book entitled Popcorn and Parables, and there is another entitled Saint Paul at the Movies.

But the importance of the eyes for both faith and film, here is an idea that is worth considering. For with both our Christian experience and our movie-going, it is not enough to be present, to go through the motions. One must have eyes to see and ears to hear. Cathy and I are often asked, “Why are you so interested in movies?” “What makes you want to write reviews on them?” One answer is that we hope to provide spectacles, or glasses, so that you can better see certain movies. But prior to any such altruism is our own experience with going to the movies. For both of us, it was at the movies that we heard God speaking to us, that we saw God in a new way. So rather than review one of the “summer lite” movies, let me recommend a classic that you can easily get on video, one that caused me to go into the ministry.

Nominated for twelve academy awards in 1964 and starring Richard Burton with Peter O’Toole, the film Becket tells the story of King Henry and his drinking buddy, Thomas a’Becket. King Henry wanted free rein to live and act as he chose, to whore and wage war and tax the citizenry as he saw fit. His one obstacle to complete license was the Archbishop of Canterbury who had his own independent authority as leader of the Church of England. The Archbishop (and thus, the Church) often frustrated Henry’s design.

In order to solve his problem, King Henry ingeniously decided to appoint his companion in “wine, women and song,” Thomas, as the next Archbishop. Brilliant, except for one problem. Thomas decided to take his new vocation – his calling to be God’s servant – seriously. Since he was chosen to be archbishop, he would be Archbishop. He would serve God and not the King. The King tries to persuade him to compromise and accommodate to his old friend’s (and King’s!) wishes. But Thomas remains steadfast. As a result of his faithfulness, in the film as in history itself, Thomas is martyred in the cathedral on the altar steps.

When I saw this film as a freshman in college, I did not much identify with Thomas becoming a martyr (or, as my friends will attest, with his subsequent sainthood!), but I did hear God calling me to the Christian ministry. For my struggle with accepting God’s call to become a minister was with my image of the pastor as needing to be a holy person. My Young Life leader who had ministered to me when I was in high school was such a person, as was my church counselor, Warren Thompson. Yet, I knew I was no saint. In the film, however, I heard God saying to me through his Spirit, “You need not first be holy (Thomas wasn’t), only obedient to my call.” And I responded like Thomas and said, “God, I will be loyal to you with all my being.” Here is the power of film. It not only can provide the occasion for critical reflection on life. It can reveal and redeem. It even can be the occasion for God to speak to the viewer.

There is a coda to this story. I told the account of my call into the ministry at a conference entitled “Reel Spirituality” which several of us organized in the Fall of 1998. Fifty Hollywood screenwriters and directors and fifty leading pastors and church leaders had gathered to discuss “Storytelling as Common Ground: The Church and Hollywood.” When I was finished, one of the other speakers, Father Gregory Elmer, a Benedictine monk, commented that he too had heard God speak to him, calling him into the monastic life, while watching the same movie! We could even identify the different scenes in the film where God had made himself known to us. This film had been the occasion not only for us to know something about God, but to actually know God.

What is also noteworthy in this “coincidence” is the fact that the two of us saw the same movie, Becket, yet heard God’s call in unique ways. For me, the issue was obedience to the call to active service in the world, and I became a Protestant minister who teaches theology and culture. For Father Elmer, his call was to purity of heart and single-minded devotion, and he became a Catholic mystic. It is all in having the eyes to see and the ears to hear. Or as Richard Trinity suggests, “The Eyes Have It.”

P. S. I still need a good title. Any suggestions? 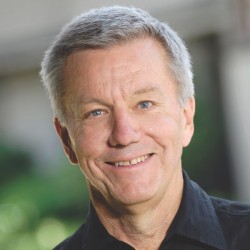