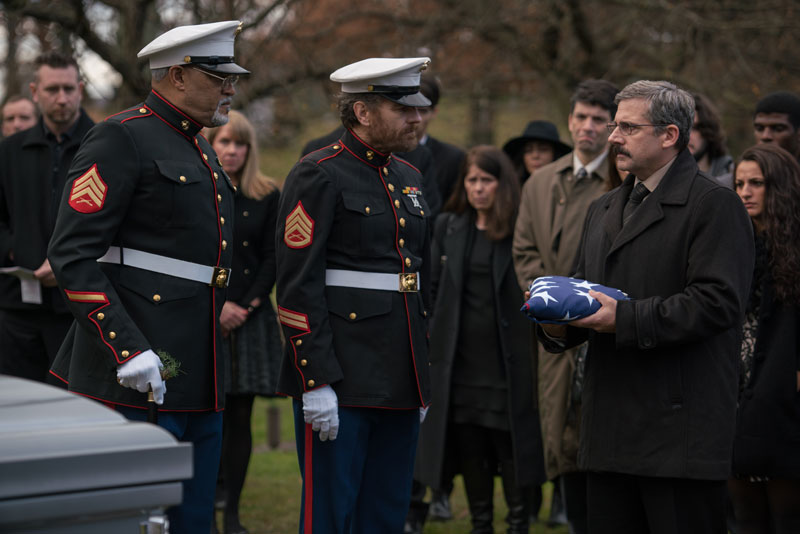 In Last Flag Flying, significant time is spent on a train, an Amtrak cutting across the East coast. Time is spent in a car too, but much less than on the train. The key difference between train travel and car travel has to do with agency. In a car, you are in charge. You are the active party. Other motorists are threats, and the goal is to claim as much distance as quickly as possible. Train travel removes your agency. You become a passive passenger. Laying aside your felt need to take charge, you are free to relax, let the landscape come to you, reflect on the land and life as you stare out the window. Taking the train may take a little longer than driving, but it feels faster, fuller. It gives life instead of draining it, as driving does. I used to take an Amtrak once a week, round-trip between san Diego and Los Angeles. I miss it.

Richard Linklater likes trains. His most famous film, Before Sunrise, begins on one, and the moment it becomes clear that the trio of Vietnam War veterans in Last Flag Flying are going to board a train, I knew I was in for a treat. I enjoyed what happened in the film before that, but the train is the place where film comes into its own. It’s the moment when the characters all let go and allow themselves to just be together. On a train, there is little else to do besides look out the window or talk with your fellow travelers. You have yourself to offer, nothing else. Nothing else is required.

The men are on the train, because it is transporting the casket bearing the body of ‘Doc’ Shepherd’s (Steve Carell, quiet, huggable) late son, who was killed while serving with the Marines in Iraq. The other two men are Sal Nealon (Bryan Cranston, Nicholson- or Sutherland-esque) and Rev. Richard Mueller (Laurence Fishburne, perfect). The three men served in Vietnam together, but they haven’t seen each other in forty years. They are accompanied by a young Marine, Washington (J. Quinton Johnson, one of Linklater’s discoveries in Everybody Wants Some!!; More! More!), and the train grants the men a chance to both properly catch-up with one another and to share their war memories with the young Marine.

Spending time with old friends has a way of reviving the people we once were, for good or ill, as our past personalities contrast with our present ones. Adding another unfamiliar person to the mix complicates things further. Washington is someone for the three old men to perform for, father, or test themselves against. Washington is also a reminder of the men they once were, of the man ‘Doc’ Shepherd’s late son was. His presence highlights the cyclical nature of things, how the war in Iraq is like the war in Vietnam, how America treated its veterans then and now. There is legacy and lament. ‘Doc’ sits on his son’s coffin throughout the scene.

Last Flag Flying is more than these scenes set on the train. The men go other places and travel together via other means. But they talk about who they were and who they are and who they wanted to be constantly. They discuss America, its nature and grace. They beseech the Beyond, each in their own way, via each other for counsel – more, for consolation. They are, all three, near the ends of their lives after all, but then again, they are together because a young man has died, so aren’t we all? They are searching for pride of the kind Rev. Mueller, at one point on the train, affirms is not a sin. Aren’t we all?