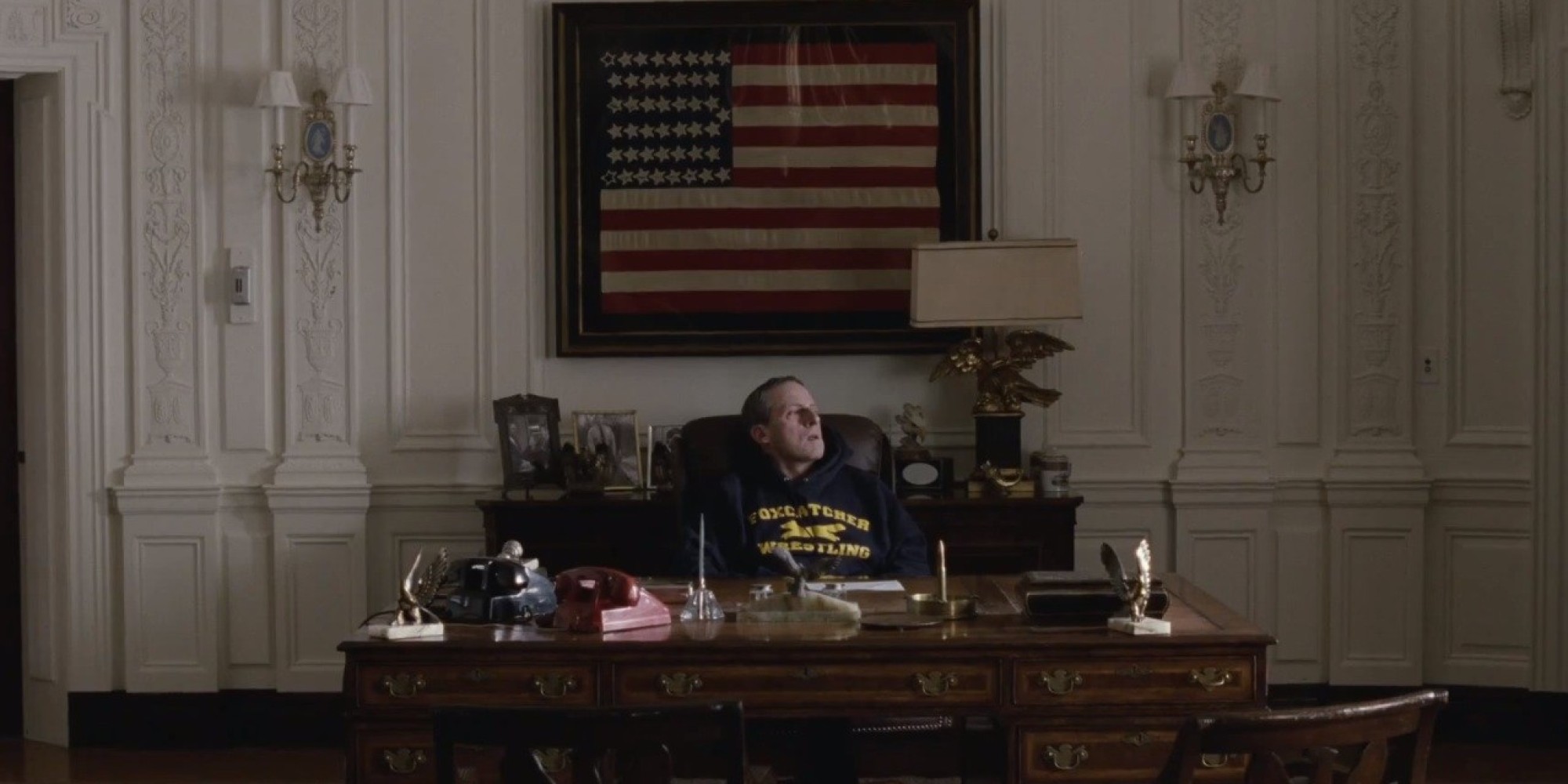 Foxcatcher is a quiet film. Like a patriarch who refuses to talk about his feelings, the film sits still, apparently brooding, unbothered by your presence in the room. It takes its time, does what it wants, and only gets up when the game is over.

The game, in this case, is wrestling – the Olympic kind, not the pile-drivers and body slams kind. Foxcatcher recounts the events that led to the murder of Olympic gold medalist David Schultz by benefactor and coach John du Pont at Foxcatcher Farms, the du Pont estate, in 1996. Like director Bennet Miller’s previous films, Capote and Moneyball, Foxcatcher is almost clinical in its explication of events. It simply lays the characters and facts on the table and allows the audience to make what meaning they can from what is presented. The film is an exploration of a crime, the personalities involved, and the culture that sparked them.

Like the characters it features, Foxcatcher’s primary means of communication is violence. An early scene shows the two Schultz brothers, David (Mark Ruffalo playing yet another man negotiating a war between his convictions and his rage) and Mark (Channing Tatum playing yet another man learning the price of his ambitions), arguing not with words but on the wrestling mat about a decision David has made to coach the 1988 Olympic team. Their argument begins as a kind of established dance, like so many arguments between family members, before erupting into an all out athletic match in which one brother finally and decisively establishes dominance over the other.

When John du Pont (Steve Carrell playing yet another man who will make a fool of himself in order to be loved) enters the story, this pattern of communication by violence is continued. At times, physical violence is pantomimed to establish John’s inclusion in and control over the group of wrestlers. Other times, the violence assumes different forms like coerced testimony, a camera lens, a checkbook, and yes, even gun play.

In my favorite scene, John is engaged in target practice with a group of law enforcement personnel on his property, and the group of wrestlers jogs by and jovially waves to John. Recognizing his physical inadequacy, John takes his gun into the gym where the wrestlers are practicing and fires a shot to reassert that he belongs in the group. Like most of Foxcatcher, the scene is subdued and tense, and it seems absurd until you realize that Foxcatcher isn’t about wrestling. It’s about men in America, and this dynamic—power asserted and maintained via violence. This is the prevailing dynamic in our culture and has been since our country was founded.

Yes, Foxcatcher is about the United States and the place violence plays in our national and personal identities. Explicitly, the du Pont family is one of America’s oldest families, they made their fortune selling arms during the Revolutionary War, the Schultz brothers are U.S. Olympic champions, characters talk openly about the need to reestablish American values, and the final sound we hear in the film is that of a crowd chanting “U! S! A! U! S! A! U! S! A!” Implicitly though, the film focuses a conflict between the aristocracy and the working class, what’s at stake isn’t a wrestling trophy but rather the locus of societal authority and the justification for that locus, and the part money plays in all of that. Namely, the movie is about all the things the Revolutionary War was about, and the way it is settled is through violence.

However, the dynamic of power established and maintained via violence isn’t particular to the American experience. Neither are the power games played by the upper and lower classes. This is common to societies throughout history. As Walter Wink explains in his prescient paper, The Myth of Redemptive Violence, this story is as old as ancient Babylon. The myth always includes a power struggle between masculine entities that is resolved by the devastation of the female and the establishing of a new societal order. In the Babylonian myth, the father god is already dead, and the child god wars against the mother god who still holds sway. Once she is destroyed, the child god can ascend and establish order on his terms, an order that must be continually, violently reasserted.

In Foxcatcher, John’s father is long dead, and his mother controls his world. His conflict with the Schultz brothers is really a conflict with his mother. In the violence myth, the female is often depicted as a monster residing in an abyss.

Notice the space John creates on the trophy shelf before lashing out at his mother after the first wrestling match and the visible void John creates and performs to the one time his mother visits wrestling practice. She is the dragon in the pit. He has to overcome her.

Once his mother is gone, John ought to be able to find peace, right? But the myth of redemptive violence has no place for peace. The Schultz brothers and the “all men are created equal” ideal they represent (especially David, his children, and his noticeably irreverent wife) are an ever-present threat to John’s authority. He must dominate them to maintain his self-delusion of power. As Wink explains, “Chaos incessantly reasserts itself, and is kept at bay only by repeated battles.”

Foxcatcher is a dire film. It’s cycle seems inescapable. Fortunately, there is another story we can claim as our own. As Wink explains, the Judeo-Christian creation story, first recorded during the Babylonian captivity as an answer to the violent Babylonian myth, posits a good universe created by a good God and not established and perpetuated by violence. Violence in that story is a problem to be solved not the essential nature of existence.

As I watched Foxcatcher and wept for these three, sad, lonely, broken men who had learned to speak the language of violence eloquently, I realized that to refuse to speak that language is to confound and confuse the speakers of it. To choose non-violence, rational discourse, compassion, empathy, patient servanthood, peaceful protest, transparency, sacrificial love, enduring hope, is to sound nonsensical to the culture at large. To give up violence is to abandon one’s natural tongue and to be rendered silent much of the time until others begin to learn new ways of speaking.

Perhaps that’s why Foxcatcher is as quiet a film as it is. Perhaps it is unwilling to participate in the culture of violence it depicts. For certain, it does not itself thrill to its depictions of violent acts, be those acts on the wrestling mat, in banquet halls, on TV screens, or behind the barrel of a gun. Foxcatcher simply lays them bare as asks us if perhaps there might be a better way to be male, to be American, to be human in this world.