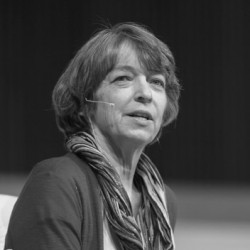 Marianne Meye Thompson, the George Eldon Ladd Professor of New Testament, joined Fuller’s School of Theology faculty in 1985. She has been instrumental in developing courses that integrate biblical interpretation with other theological disciplines. In addition to The Promise of the Father (2000), an examination of divine fatherhood in Scripture, she has coauthored Introducing the New Testament (2001), and written The God of the Gospel of John (2001) as well as commentaries on 1–3 John (1992), Colossians and Philemon (2005), and the Gospel of John (2015, in press).

Learn more about Dr. Thompson on her faculty profile.

Study with her in Fuller Seminary’s School of Theology.

“The ministries of Christ happen inside and outside the walls of the church—in banks and schools and theaters and hospitals as well as in congregations. And we believe that men and women are equally called to and gifted for all these ministries: gender is no barrier when the Lord calls and equips someone for service, whatever it might be.”

+ Listen to Dr. Thompson reflect on her years-long project of writing a commentary on the Gospel of John, and read Dr. Thompson’s guest edited issue of FULLER on the topic of women in ministry here.

The “Mind of Christ” in the Gospels

Fuller, the Bible, and Women

Christus Victor: The Salvation of God and the Cross of Christ