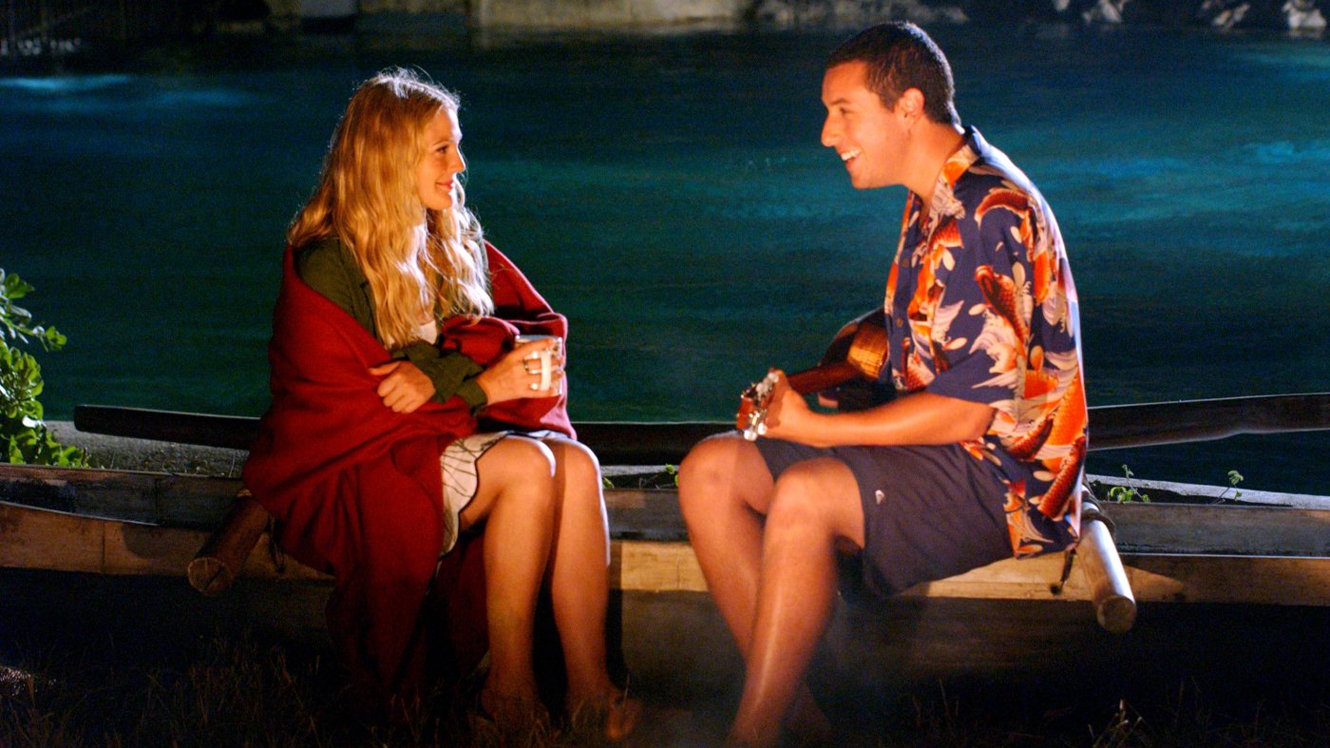 There is a resilient sweetness at the core of the characters Adam Sandler typically plays that often gets overcome by his characters’ equally powerful bouts of anger. In his most purely-comedic films (The Waterboy, Happy Gilmore, Billy Madison, Little Nicky), he presents that sweetness as simpleness and the anger as hidden strength. In his more romantic films, like 50 First Dates, the sweetness comes through more genuinely, and the anger tempers into resolve. (There is a third variation on this dynamic in Sandler’s work in which the sweetness is cast as woundedness and the anger rankles into depression. See Reign Over Me and Funny People.)

I like Adam Sandler in the romantic mode. 50 First Dates is an under-appreciated gem of a romantic comedy that finds a new way to use the since-Groundhog Day standard time0-loop conceit. There is nothing metaphysical about 50 First Dates. Lucy (Drew Barrymore, the gamine who, for my money, best matches up to Sandler’s charisma) suffered a tragic brain injury that means she cannot form new memories. She wakes every day thinking it is the day of her accident. Her family and neighbors have accepted her plight and do what they can to make her life (and their own) as peaceful as possible. Sandler’s Henry meets Lucy and falls for her without knowing what’s up, and he’s less willing than the other to just let matters be. 50 First Dates is the sweetest film, and it contains a deeply affecting picture of what true love looks like.

Stripping the time-loop conceit of its metaphysical elements means that Lucy’s plight is much more tragic than anything endured by Phil Conners in Groundhog Day. There is no magical way out for Lucy or for everyone in her life who is daily heartbroken by, if resigned to, her predicament. They love her as a daughter, sister, and friend. Henry loves her even more, and his love for her compels him to find a way to give her a richer life than the stasis in which she is existing when he meets her.

50 First Dates manages to say something novel about this “meaningless, meaningless life” we life we live, as time-loop movies make so abundantly clear. Love transforms all those stories, but in every other instance, the time-loop-trapped protagonist learns to love to get free. In 50 First Dates, being loved is the key that unlocks the door. That’s truer to our “meaningless, meaningless” predicament than the other version, because ultimately that’s who we are. We are God’s beloved. We will never be as we should be. We can accept that in the confidence of God’s love for us. It is only God’s love for us that gives our lives meaning.

it is good to learn to love others and to, therefore, live a better meaningless life. It is immeasurably better to learn to accept God’s love for us. Then we live a truly meaningful life, not trapped in meaninglessness, but tapped into the eternal love of God.