There is an old cliché which says, “Does art actually imitate life?” Christian worship is a heartfelt response to the creator who “gives everyone life and breath and everything else” (Acts 17:25). Both religion and art originate in the creator God. Artistic gifts are the generous grace of God to humans and though theology and art are separate spheres, they belong together as all branches of the arts are at home in Christianity. Theologians suggest guidelines for the appreciation, evaluation and approach to the art with “responsible respect”.[1] Riches embarks on a journey less travelled by practitioner-scholars in the field. It is an illuminating work that reflects keen scholarship while staying true to spirituality.

Riches showcases the maturation of worship discipleship through practices undergirded by missional thought and the love of the religious other, both of which are meant to promote peace and resist violence. Consistent with her proposal, this reflection asserts that worship is a taste of transcendence and revolves around three-dimensions: devotion (orthopathy), didache (orthodoxy), and dialogue (orthopraxy). Each Christian tradition has distinct ways of experiencing God’s presence through particular art forms. For instance, the Eastern Orthodox encounter God through liturgy and icons, the Roman Catholic mass focuses on the Sacramental Eucharist; Lutherans, and Anglicans celebrate with richly coloured vestments that visually enhance the practice of worship; Reformed traditions emphasize the role of the sermon, Baptist revival services privilege the altar call while Pentecostal/charismatics encounter God through music and song.

Wholistic worship, however, requires that worship focus on more than one aspect, such as the sermon, song, sacraments, space or silence. This is because reducing God’s worship to one aspect “fails to worship him in his entirety”.[2] As a result, all Christian traditions contain within them rich sources for which one can draw on for renewal.

The question addressed here is how does art in contemporary praise and worship (CPW) move Christians towards a more biblical orthopathy, orthodoxy or orthopraxy? For Riches, CPW is deeply tied with certain art forms: music, choruses and songs. According to her, sung theology is a tool for faith formation. This affirmation is correct since the three-dimensional function of congregational singing is firmly rooted in Judeo-Christian worship (Ex 15; 31:4–5; 35:30–32, 35; Psalm 90; Deuteronomy 34; Eph 5:17; Col 3:17). During the Reformation, Luther famously abandoned the beautiful markers of music of the pre-Reformation mass, in favour of popular tunes familiar to ordinary churchgoers. Nevertheless, starting with Luther himself, a sequence of gifted musicians from Hassler to Bach provided harmonization that raised these same tunes to new heights of musical excellence. Similarly, Charles Wesley used attractive rhymes and rhythms to make complex theology accessible to large numbers of poorly educated people, while at the same time producing religious poetry of enduring word and mystical power. Likewise, American evangelicals, especially in the South, absorbed and transformed country music in their hymn singing.

As discussed above, our most fervent hopes come true when expressed through emotion. In the religious realm, emotions such as fear and love dominate worship practices. Since love can be expressed as an emotion, how can one be commanded to love? Jesus responds to the question, “Which is the greatest commandment in the Law?” with two references from the Torah, “Love your God and Love your neighbour, with all your heart, soul, and mind” (Deuteronomy 6:4-9; and Leviticus 19:18). From a biblical perspective, the heart is a metaphor for the seat of craving and aspiration (orthopathy); the human soul refers to the seat of the intellect (orthodoxy), while power or strength refer to the right use of resources (orthopraxy).

One of the main goals of Christian worship is to find pathways of God’s presence that lead to participation in the missio Dei.[3] Practical theologians and missiologists recognize that music is a cultural-text embedded and translated in both verbal and non-verbal communicative codes. As such, music plays an important role in contemporary congregational worship and the witness of the church. It has the power to shift both cognitive and emotive modes in human beings.[4]

Riches shares the story of Hillsong United’s engagement with Muslim families in the Syrian refugee camp in Beqaa Valley, Lebanon. Her example shows that art can help break misconceptions held by many in the West, regarding Islam. This is particularly important, because throughout its history, the church has had difficulty understanding Islam. Parallel to Judaism and Christianity’s three-dimensional worship, Islamic Sharia reflects orthodoxy (correct belief) and orthopraxy (correct practice), while Sufism’s emphasis on personal spirituality aligns itself with orthopathy. Therefore, Sufis are known as the missionaries of Islam and have played an essential role in its spread through expressions of music, dance and singing.

Both verbal (reciting, chanting, reading/singing) and non-verbal (calligraphy) forms of art, play a critical role in Islamic tradition. For example, in Pakistan, Muslim religious artists, particularly reciter/singers, hold a special rank with distinct titles such as: qari (Qur’an reciter), the muezzin (prayercaller), Naatkhwan (praise of prophet), qawwal (Sufi devotional singer), and azadaar (mourner of Husain). So powerful is their status that Muslim mujahidin militants are recruited through the use emotional religious poetry; they in turn, sing stories to prepare them for holy war.[5]

The significance of oral culture to Islam was neglected by western missionaries as they attempted to engage Muslims with written and literary tools. This was unfortunate since Muslim and Christian scriptures have a rich tradition of poetry and sacred texts rooted in hymns and in the oral performative practice of cantillation. Given the similarity of the performance alternation in sacred texts of the Abrahamic religions, the Psalms represent common ground for musical interfaith dialogue and transformative public witness processes between both religions.

Given the current climate of Islamophobia, Nicholas Wolterstorff emphasize the aesthetic dimension of action (orthopraxy) over against traditional notions that confine art to contemplative experience. Riches asserts that Pentecostal spirituality is an oral culture that is transmitted by songs in “the aesthetics of everyday life”. Such examples prove that the emotive power of musical art has the potential to connect with the heart, cultivate trust, and build bridges between religious “others”.

Art and artists are the frontiers of God’s mission in the 21st century. Musical art has the potential to counter terror, create fraternity and connect religious communities across cultures. The prophetic imagination of Christian worship should challenge congregations to create a better world. Towards that end, the church needs to rediscover the dialogical power of art and ask God for wisdom in choosing the correct path to participate in the missio Dei in the twenty-first century. 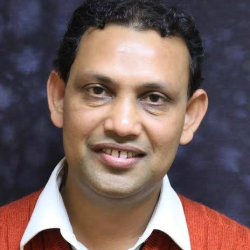 Eric Sarwar is a Ph.D. (ABD) phase at Fuller Theological Seminary in Pasadena, California in the area of intercultural studies, researching the role of Zabor (Psalms) in Muslim-Christian relations. For the past twenty years, he has served as an on-the-ground practitioner, pastor and a visionary voice in this missional movement, serving as a musical peacemaker in an Islamic context. He is the founding president of the Tehillim School of Church Music & Worship in Pakistan and adj professor of global music at Azusa Pacific University in Southern California.