“Lord, to whom shall we go? You have the words of eternal life” (John 6:68). With these words of Simon Peter to Jesus, my students and I started every session of a course on biblical interpretation at the College of Christian Theology Bangladesh. Unlike Peter, who could turn face to face with Jesus to seek the words of eternal life, Protestant and evangelical Christians now turn to the codified words of the Bible, comprised of the two testaments, while seeking those same words of eternal life. If, as Christians profess, Christ is the Word of God, then how do we draw near to Christ? How are our practices forming us? I wanted to inquire with my students into our Christian identity by attending to the practice of reading Scripture.

As a community of interpreters, the students and I turned the pages of the codex and clicked on the text not to find the absolute answers but to find the questions that God is asking us here and now. We sought to turn toward Christ through our practices of engaging Scripture. On the first day of class, I had warned the students that this course would not be about the Bible or even what the Bible says, but an inquiry into what we do when we study, hear, meditate, pray, or sing the words of the Bible, and what the Bible does to us when we engage in these practices.

Frankly, I did not know what I was doing, but I knew that I wanted to do things differently to find a way around merely asking, “What does the Bible say about this or that?” I wanted to move beyond the disputes over differing interpretations. So, in this course, I sought to lead the students on an exploration and questioning of our Christian faith and the practices that surround our attempt to interpret, understand, and apply the book containing the words of eternal life in the unique context, culture, and language of Bangladesh. My sense is that it is not just “what” we learned that is significant, but the process of learning and relationships we have to those “with” and “from whom” we learned. To whom shall we go?

My own attempt to understand myself, my identity, and the Christian faith has led me in a hermeneutical venture deep into relations with persons from other religious communities. However, my interreligious experience, attempts to connect with others in meaningful conversation and engage in dialogue, often lead me into places where the options to respond can be characterized as receptivity and vulnerability. A serendipitous meeting with Father David Burrell and his abiding mentorship have sustained me in this quest for self-understanding that reaches beyond the confines and comfort zone of my own religious community.

In my response, as it is profoundly shaped by my experience in Bangladesh, I want to problematize the Christian claim to the Bible and the notion of sola scriptura by posing the question “To whom does Scripture belong?” through a sharing about the practice of scriptural reasoning.1 I do this in an ongoing effort to uncover who we are and to whom we should go.

As Gupta exclaims, “The pagans will surprise you!” Rather than “drawing a line in the sand to keep the pagans away from Jesus,” why not go to those very others who stand outside of the Christian community to find Jesus, to learn from others how to follow Christ, and to read anew the words of our Scripture. While we may have faith in Scripture alone, it is not only Christians alone who have faith in the Bible. Others, for example, in Bangladesh, are also reading the Bible. Segments of both Testaments are claimed and revered by Muslims. The gospel of Jesus has even been embraced by some Hindus, including Mahatma Gandhi. So if others are already reading our Scripture, why not be intentional about sharing our Scripture and read it together?

What if coming to an understanding of religious identity requires knowing and learning about oneself in community with others outside one’s own religious tradition? As Merold Westphal (2009) wrote, “the (ongoing) formation of pastors should include learning the hermeneutical humility that recognizes the limits of one’s own tradition by learning to recognize and treasure the resources found in other traditions.”2 When we listen to the religious traditions and sacred texts as others hold them, cultivate interreligious dialogue and conversations across religious boundaries, and forge friendships with others, we enter into mutual and liminal spaces of ongoing dialogue and interpretation.

Since last year, I have been involved in organizing interreligious dialogues among Muslims, Christians, and Hindus using an adaptation of the Scriptural Reasoning approach with a group of college and university students working as volunteers of the social welfare organization, Shanti Mitra (Friends of Peace) founded by the Taizé community, located in Mymensingh, Bangladesh.3 The group is exploratory and will provide a basis for my dissertation research related to interreligious dialogue and religious learning. Shanti Mitra has sought to involve youth from diverse religious communities in religiously neutral peace-building activities. However, the staff is finding this increasingly untenable, especially given communal violence among religions and the dubious, political use of religion leading up to and following the 2015 parliamentary elections in Bangladesh.

A driving question of this project is posed by David Ford: “As conflict related to religions threatens to destroy our world, how might particular faiths come together to draw on their resources for mutual understanding and peacemaking?”4 Similarly, David Burrell asks: “If religious traditions, taken singly, have proven ineffectual in responding to violence committed in their name, could it be that persons from others traditions may empower persons to be critical of the distortions of their own traditions, as well as help us discover our respective resources for peace?”5

Scriptural Reasoning dialogue sessions are based on the reading, expounding, and questioning of each other’s sacred texts with the hope that the experience of coming to understand how others understand their sacred texts might lead to a deeper understanding of one’s own hermeneutical tradition and a deepening of relationships across religious boundaries. While the practice and process of Scriptural Reasoning has usually involved members of the Abrahamic faiths, it holds promise for enabling young people in Bangladesh from Muslim, Hindu, and Christian backgrounds to go deeper into their own religious traditions through meaningful encounters with persons from other traditions. According to David Cheetham, the goal of Scriptural Reasoning is to “raise the quality of disagreement” and “degree of honesty,” that allows the ensuing discussion to delve more deeply into divisive issues.6 Scriptural Reasoning sessions are liminal moments and mutual spaces, characterized as “tents of meeting,” for inquiry, conversation, and forging friendships using the sacred text as a device to open a hermeneutical process.

In a recent article titled “Scriptural Reasoning,” Nicholas Adams challenges Christians to rethink 2 Timothy 3:16.7 What does it mean to say that “all scripture is inspired by God”? As Adams observed, the learning in Scriptural Reasoning is not merely an opportunity for participants to learn about other religious traditions but has an unusual and potentially powerful dimension. Participants interpret each other’s texts, and they interpret texts together. They learn about their own tradition’s scripture through others’ interpretations, about the generativity of scripture across traditions, how to articulate the power of their scriptures to reveal God’s address, and from their formation in their own traditions to interpret each other’s texts.8

The key to understanding one’s own faith will often be provided by religious others, as Burrell has often noted. The presence of persons belonging to other religious traditions and interreligious encounters can help individuals from different traditions gain insight into their own tradition and the ways it has been compromised by the seductions of political power.9 Our particular scriptures need not be exclusively ours but openly shared and read with others, who may in turn help us seek the words of eternal life. This is happening as we read the Bible together across the religious boundaries between Muslims, Hindus, and Christians in Bangladesh. The one to whom we should go is found in others, in our neighbor and in the stranger. Not only is all Scripture God-breathed, but God’s Spirit breaths through all persons (Acts 2:17) to illuminate our understanding and call us toward transformation.

[7]Nicolas Adams, “The Scope of Scripture in Scriptural Reasoning: Reflections on 2 Timothy 3:16,” posted on Academia.edu: http://www.academia.edu/8468246/The_Scope_of_Scripture_in_Scriptural_Reasoning. 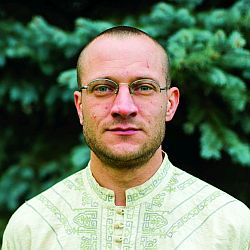 Jeffrey Bos is a theological educator and leadership developer with Christian Reformed World Missions, serving on the faculty of the College of Christian Theology Bangladesh. He is also a PhD candidate in leadership studies at Gonzaga University and is researching how emerging faith and community leaders are learning with friends through interreligious dialogue.