Pauline Cheong’s article communicates clearly about the challenge of understanding the nature of religious authority in our digitally connected world. She illustrates well the various ways religious leaders have used technology in an attempt to extend their authority. At the same time leaders’ authority have been challenged by the digital connectivity that is ubiquitous in our daily lives. In this brief response to Cheong’s article, I would like to touch on the following three points: the traditional authority of churches and the challenge of online information; authority and censorship; and a potential expansion of this discussion beyond religious institutions, to a broader cultural exploration of religion and spirituality.

First, as Cheong points out, “one of the most popular conceptualizations about new media is that forms of religious authority are altered by digital technologies perceived to disrupt traditional faith doctrines and domains marked by hierarchical order.” Hierarchical authority is challenged not just by the voices of many online but through the very nature of accessibility of information, leading people to no longer seek out religious authorities through traditional means. While conducting doctoral research a few years ago, I asked people how they would seek out answers to their spiritual questions. The primary answer was through their friends and community. Secondarily, they said they would search online. Ranking last in the survey was seeking out answers through a religious institution or church. Many of those surveyed had attended religious services at some point, and even most of those who still did, no longer saw leadership as authoritative.

Interestingly, while digital usage weakens authority in some ways, it can also strengthen authority within the community. It does so by utilizing influence through social media to keep churchgoers connected in other aspects of their lives, thus widening the reach of clergy/leadership. This “branding” that religious leaders and institutions are utilizing attempts to spread influence in multiple mediums in order to connect with people’s digital lives. While these efforts seem to show some success, the long-lasting impact remains to be seen. Is this a valid form of contextualization or more of a marketing tactic that will lose its luster over time?

The second response is in regard to censorship. Cheong states that “rather than be threatened by new technologies” some have in essence encouraged a censorship of online religious activities that go out of the bounds of normativity in their communities. She gives the example of “the dismantlement of comment modes on their church’s video sharing platforms to curtail contrarian views.” This sort of censoring of alternative views is obviously nothing new but doing this in an online public forum runs directly and intentionally counter to the open structure that social media platforms support.

Some scholars like Henry Jenkins envision an environment online that is a liberated public sphere where people are able to participate and contribute without succumbing to the controls of hierarchical structure.[i] This makes for an interesting conundrum for religious leadership. How does one maintain an element of control, what might sometimes be referred to as “orthodoxy”, when the very platform itself that religious leaders are using is designed to have people participate?

As churches attempt to continue to extend themselves through online campuses or services as well as other digital mediums of podcast, social media, and more, they forfeit some of their control. This puts the church’s content, which has traditionally been held by those in power and authority within churches, in the control of the general public. When their unique content and message is distributed and accessible to others, is their authority still needed? Further, is it still economically viable? For religious groups the tension arises due to the fact that someone is needed to generate content. However, once generated and distributed, this does not guarantee a return financially, numerically, or in other ways to the generator of the content (i.e. the church or religious group). Instead, they are simply one voice amongst many whom the online user may consider viable. In this way, religious groups are no longer the sole owner or distributor of unique religious content, nor are they able to control the content once distributed. The result is a destabilization of the traditional voice of authority, except for those who constitute the committed following.

Finally, one potential area of expansion to this discussion is with regards to religion in our current culture. Here, I am thinking mainly of American culture, where we must ask the question of whether religion is being experienced differently by the vast majority of society. Religious authority is certainly being challenged, but perhaps it is also being freed from structural constraints in ways that mirror societal views of religion and spirituality. What changes if we picture religion, for example, more as a “society conversation about transcendent meaning” as Kelly Besecke talks about it?[ii]

This would allow for religion (or perhaps spirituality) to be spoken of more broadly rather than limiting it singularly to specific religious structures. In this sort of scenario, religious authorities might increasingly take on the role of a tour guide and less of a guru. Religious institutions no longer have the corner on the market for spiritual goods and services, and instead are one voice amongst many. People will often utilize a religious group alongside many other avenues of religious meaning in their lives. What if, instead of viewing this as a decline in religious authority or as a challenge to it, we begin to see this as an opportunity and a way of being that allows for one’s spiritual views to be lived out in all areas of life?

In conclusion, while there are certainly changes afoot, I am reticent to see these as entirely negative. Authority is being challenged, but I do not think there is a lack of need for the traditional expert. However, the role of religious authorities seems to be shifting. The nature and structure of religious organizations also will likely shift over time. However, the quest for spiritual and religious meaning in the lives of people has not changed. It is to this that we must give our hope and energy, rather than the preservation of institutions.

[ii] Kelly Besecke, “Seeing Invisible Religion: Religion as a Societal Conversation about Transcendent Meaning,” in Religions of Modernity: Relocating the Sacred to the Self and the Digital (eds. Stef Aupers and Dick Houtman; Leiden/Boston: Brill, 2010) 89-114. 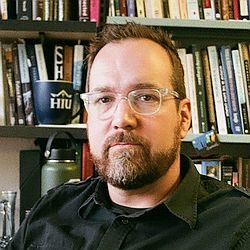 Phil Towne earned his Ph.D. in Intercultural Studies from Fuller Theological Seminary (2017). He is Professor of Intercultural Studies and Ministry and Chair of the Intercultural Studies department at Hope International University in Fullerton, CA. He was previously one of the first internet pastors in the country and has published the article “Spirituality in an Age of Technology” (Stone Campbell Journal) and contributed a chapter to the edited volume Theologians and Philosophers Using Social Media.