The Scripture warns believers to avoid putting “new wine into old wineskins,” but how can the faithful make the gospel fit into new wineskins shaped by issues of cultural relevance and complicated by ever-evolving technology? What are we to do when wine turns into bottled water and wineskins become recyclable? This is more or less what is happening with ministry development in the digital age. Recent news events and research studies suggest that new social, cultural, and media usage paradigms have emerged that create constantly changing “new wineskins.” Here are a few statistics that bear witness:

According to Digital Buzz Blog, this time last year there were over 500 million users worldwide on the social media network Facebook. The average usage was one in every 13 people on earth, with over 250 million of them (approximately 50%) logging in every day.

Today, 48% of 18–34-year-olds are in the habit of checking Facebook accounts when they wake up; with 28% doing so before getting out of bed. The 35+ age demographic grew rapidly in Facebook usage; they now make up over 30% of the entire Facebook user base. The usage of the core 18–24-year-old segment grew the fastest, at 74% per year. Almost 72% of all U.S. Internet users are on Facebook, while 70% of the entire user base is located outside of the US.1

Even more astounding, the blog goes on to assert that 700 billion minutes a month were spent on Facebook, 20 million computer applications were installed per day, and over 250 million people interacted with Facebook from outside the official website on a monthly basis, across 2 million websites. Over 200 million people accessed Facebook via their mobile phones. As many as 48% of young people get their news through Facebook. Meanwhile, in an average 20 minutes on Facebook, over 1 million links are shared, 2 million friend requests are accepted, and almost 3 million messages are sent.

Let’s put this staggering data into perspective. If Facebook were a nation, its “population” would be more than double that of the United States. If online minutes spent by Facebook users were the functional equivalent of U.S. dollars, the social network’s estimated 84 trillion minutes of usage time would translate to $84 trillion in annual spending. That number would top the collective gross national products of all nations across the globe, even if the U.S. and European Union were counted twice.3

Even more disconcerting, these are just the usage statistics for one Internet social network. If we added other digital media usage statistics such as television, radio, video, projectors, projection screens, CDs, DVDs, MP3s, iPods, iPads, XBox, Playstations, webcams, and electronic books—just to name a few—the numbers would be beyond staggering. For some, these numbers are meaningless, but for the church, these point to “new wineskins” that cannot and should not be ignored.

Historically, the church has regularly found itself on the verge of new technology usage. From the Gutenberg printing press, to the very first live radio broadcast sponsored by Westinghouse’s KDKA radio station, the Church has been an active participant in the application process of new media. During every technological introduction, the one prevailing question that the church has consistently asked and sought the answer to is, “How can the church use this to reach the world?” For better or worse, many churches, judicatories, missionary societies, ministry organizations, and even the Vatican have done their best to use technological resources in mission and outreach. Some have successfully met their goals while others have failed miserably.

One of the problems associated with adopting use of new technologies is that many churches and other religious organizations and institutions have jumped headlong into the quickly moving stream, investing vast amounts of money in new technologies that they often knew little about. Websites are created; the best and latest equipment is purchased; commitments are made. But then, somewhere between the oasis of denial and the desert of reality, they find themselves in over their heads and drowning. By surfing the Internet, one can find corpses of church and ministry websites by the thousands. This represents neither the church nor the kingdom of God well—especially since many people now visit a church’s website before visiting the church. The point of this article is not to defend the usage of technology in ministry, because—for good or bad, for better or worse—it is already a prevailing practice in churches and faith-based organizations. What this article does hope to do is raise awareness, inviting the reader to view digitally mediated ministry with a critical eye.

Digital Ministry as Art: The Good and the Bad

In reality, digital ministry is not just approaching technology with a strong arm of resistance or a soft hand of acceptance, but it is about asking and seeking answers to the question, “How do we creatively and effectively use these media to continue the work of Christ and the church in the world?” To answer this question, one is required to tap into the creative ebb and flow of the Spirit’s ability to create new wineskins in an old, ever-changing world. Thus, it begs and groans for a new kind of artist—not the artist of the paintbrush or of the performing arts, but media artists with new vision to beckon technology to speak in new ways about an old message.

by Mark A. Labberton

Beyond the Bible and the Holy Spirit, the most determinative ingredient in preaching is the preacher. The sermon matters, but the preachers who prepare and deliver the sermon matter more. Sermons stumble when preachers do not know the God they are proclaiming, the text they are preaching, or the audience they are addressing. But sermons falter most when preachers don’t know themselves. John Calvin thought that we cannot know ourselves for who we really are without knowing God and that we cannot know God without reconsidering ourselves. If this is so, the preacher and the sermon inevitably reflect the presence or absence of this self-knowledge.

This makes it all the more interesting that so much prayer, study, time, money, technology, and more suggest that preaching is all about sermon-craft.

When discussing digital ministry, we tend to approach the conversation from the technological perspective of the hardware and software. We rarely approach it from the perspective of the human-ware and what it actually requires and demands of those who are doing it and striving to do it well. It is an art form that requires more than just a meaningful group of people who like technology and do not mind volunteering their time to help. It requires graphic artists, advertisers, marketing strategists, theologians, musicians, worship arts ministers, technologists, and pastors who feel called by God to the use of digital ministry. Coupled with this calling, there should be a well-defined mission statement, a specified target audience, and some way of determining the successes and/or failures of the media employed in ministry.

To be successful, the church must realize that digital ministry is an art and that the person or people employing it must understand the artistic side of it. From Facebook pages to websites, in order to attract and keep the intended audience, the site must be attractive to the eye, pleasing to the ear, appealing to the mind, and fun. It must be engaging, enlightening, easily navigated, and provide enough variety to meet the needs of the global masses while, embracing the community it is called to serve. It must have form, focus, and function. The industry term for the appeal of a website is “sticky.” Guests stick to a site if it is informative, stimulating, useful, provocative, and generally appealing. Contrarily, the “bounce rate” refers to how frequently initial visitors navigate away from a page to a different site. In order to build an effective digital ministry, the church must decide exactly what it wants to do. It must decide the message it wants to convey. It must decide the people it wants to reach. In addition, it must be intentional in its media usage.

Retired Los Angeles Cardinal Roger Mahoney is credited with saying, “Cyberspace has the capacity to be the modern shore of the Sea of Galilee along which the Lord walks, calling disciples to himself.”4 Mahoney’s statement is compelling, but where the church sometimes fails is in deciding what to do with the virtual sea of people who are visiting the shores of their Facebook pages, reading their blogs, and following their tweets. Without realizing it, one of the outcomes of the church being on the Internet is that it has opened itself to a sea of voyeurs—people who have no intentions of doing anything more than looking. One assigns neither a negative nor a positive meaning to this observation, but when the church provides peepholes for others to view what it is doing, the scene cannot be viewed in its totality. Therefore, if we are not careful, the view we provide from the “modern shore” can mistakenly reduce the view of the Sea of Galilee to a mere pond. So, where should the church go from here? Part of the uncertainty of the art is to know how much is enough, how far to go in utilizing digital ministry, and to know when the investment has gone too far.

In conclusion, by the time this article is read, over 1 million more links on Facebook will have been shared, 2 million friend requests will have been accepted, and almost 3 million more messages will have been sent. As churches and pastors settle in to twenty-first century ministry, the stark reality is that there is no escaping the digital age and its impact on the church. The number of churches using some form of digital technology for ministry is staggering. The possibility of the number of people who could be reached by digital ministry is even more astonishing. As the church strives to uphold the challenge of dealing with “new wineskins,” cultural relevance suggests that digital ministry is a necessary paradigm shift. The art of digital ministry, however, requires more than just the latest hardware or software. It requires people who are called by God, with the knowledge, skill, and conviction to ask and answer the question, “How do we creatively and effectively use this medium to continue the work of Christ and the church in the world?” 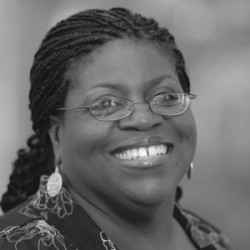 Carolyn L. Gordon served as associate professor of communication at Fuller Seminary from 2007 to 2015.