The Failure of Evangelicals Playing on the Fence

Muslims do “evangelism.” It is a duty in Islam, and is called da’wa. In Islamic dogma, da’wa means “to invite people to Islam.” It is the act of making an appealing message, calling people to embrace the faith proclaimed by Muhammad, as described in the Quran (Q 3:104; 3:110; 16:125; 41:33). The da’wa focuses on exclusive claims of Allah’s strict monotheism and Muhammad’s prophethood. Muslims are not shy about calling non-Muslims to Islam. Conversion to Islam is a goal. Just begin a religious conversation with a Muslim and, in a minute, you will be questioned about your faith and if you are open to receiving an open da’wa.

For Muslims, da’wa is an act of declaration of the supremacy of Islam and how it surpassed and replaced previous revelations. In their da’wa, Muslims often present the “unrealistic” beliefs of other faiths (e.g. God has a son, worshipping three gods, etc.), in order to make a strong case for Islam. They also emphasize Muhammad as the seal of the prophets and Islam as the best faith option for humankind. Every Muslim is encouraged to support the da’wa preachers to advance the assertions of Islam’s superiority and how the world should come to embrace it and its values. Still, there is a difference between da’wa in Islam and evangelism in Christianity. While the da’wa emphasizes submission to Allah and his laws, evangelism stresses the Good News of the reconciliation with God through Christ’s redemptive act (Matthew J. Kuiper, Da’wa and Other Religions).

While Muslims proudly emphasize, openly practice, and purposefully encourage their da’wa of non-believers, there is an unfortunate trend currently growing among some self-identified evangelicals in the West. The trend downplays the role of Christian evangelism and discourages followers of Christ from diligent attempts at conversion. The trend, at best, avoids using the word evangelism, claiming it is loaded for various reasons, or, at worst, simply replaces it and its core meaning with various buzz words, in order for Christians to presumably appeal to and fit into today’s pluralistic societies. Instead of what Jesus and Apostle Paul often described as “bringing forth the good news” and “proclaiming the truth of the Gospel,” today’s trend praises a diluted, vague, and ambiguous Christian witness (Acts 20:24; Eph. 6:20). In connecting with Muslims, this trend severely lacks euangélion and the passion for proclaiming Christ, “For necessity is laid upon me. Woe to me if I do not preach [Gk. euaggelizō] the Gospel!” (1 Cor 9:16).

Such a trend considers Muslims fine as they are, with no need to change a thing: “Let’s all just learn from each other” seems to be the motto. Instead of clearly adopting and highlighting evangelism in our Christian discourse, this trend elevates and encourages appealing to sociocultural expressions, including “what I learned from my Muslim neighbor,” “conversing with my Muslim friend in humility,” “being hospitable to the other,” “religious dialogue and mutual respect,” “peaceful interfaith dialogue embedded in diversity,” and so forth. There is no doubt that it is much easier to talk about hospitality and respecting others than highlighting the particularities of the Gospel. It is safer and less intimidating to converse with Muslims about religious coexistence and loving everyone than the exclusivity of Christ and the need for salvation. However, are Christians really called to the life of easier and safer? Are they truly supposed to fit into and appeal to sociocultural norms? (Acts 16:20 and 17:6).

This Western evangelical trend does not only buy into postmodern sociocultural rhetoric of tolerance, relativism, and pluralistic acceptance, but also betrays a key imperative of the Gospel: boldly proclaim and endure the shame of Christ and His Cross (1 Cor. 1:18, 2:14; Heb. 12:2, 13:13). Christians turn into passive agents who do not want to offend or be offended. While there might be many reasons for the flourishing of this unfortunate trend among western evangelicals, a major reason I often find is an unembellished ignorance of Islam and its tenets which thrives in western societies. In that which follows, I will focus on the failure of this trend, as I share two true stories to make the point. My basic conviction is: When evangelicals lose the evangelion in their attempt to embrace social taboos and cultural norms, they will not only fail to fit within sociocultural standards of the day, but also lose Christ’s uniqueness and neglect God’s greatest commission (Matthew 28:18–20).

In August 2017, in a gathering of many evangelicals interested in Islamic Studies, I had a conversation with an evangelical who obtained a PhD from one of the elite US universities. I listened carefully while this academic emphatically argued that evangelicals are ignorant of the true nature of Islam: “Islam is actually a peaceful religion and evangelicals mistakenly misrepresent it.” While I tried to deal with the oversimplification and generalization of the statements, I was stunned when this educated activist added: “Why don’t we encourage everyone to read Muhammad’s Biography and stop referring to the Quran and its violent verses?” I was shocked. Wait, it gets worse. This professor stated, “The Quran is difficult and full of unrealistic verses, while Muhammad’s Biography shows the true Islam as Muhammad lived it.” When I heard such an explanation, I lamented the status of the knowledge of Islam among some evangelicals who actually believe they can speak authoritatively about Islam. Consider this: If we study the trusted Muslim account of Muhammad’s Biography (translated in a scholarly edition by Alfred Guillaume and published by Oxford University Press, 2004), we read of how Muhammad and his commanders massacred a Jewish tribe in its entirety (463­–464), how he used camels to rip a woman in two (665), how he married the beautiful Aisha when she was only seven (792), and how he was confused at some point and approved seeking the intercession of pagan goddesses alongside worshipping Allah (166). Even the Muslim editor of Muhammad’s Biography states that he had to omit “things which it is disgraceful to discuss; matters which would distress certain people” (691).

Is this the model of the prophet that the world should promote today? Are these the pieces of evidence we must rely on in order to create peace and harmony between religious communities? And, more importantly, where is our commitment to openly and intentionally proclaim Jesus and describe the true need of all Muslims to find their salvation in him? Why are we trying to create an Islam that appeals to today’s Western discourse and avoid stressing the supremacy of Jesus and his teaching, as well as the uniqueness of the faith that was once for all delivered to the saints? While I cannot generalize by claiming that this educated activist is a true representation of all evangelicals, the case appears as an indicator of how some western evangelicals approach conversations about Islam and Muslims. In their unawareness of various elements of Islam, they find comfort in using appealing words to today’s secular audience, elevating mutual respect and religious coexistence and downplaying the truth of the Gospel and the need for salvation through conversion to Christ. To my fellow evangelicals let me say this: know that your words and approaches reflect your heart convictions.

One month before my encounter with this educated activist, I had a divine encounter with a Muslim man. In July 2017, I took a group of my students to do street evangelism in North Africa. We knew it was not easy, but we were passionate about evangelizing Muslims. We knew it could be the only chance for some to hear about Jesus. We went to a small town where I met Mohammed, a merchant who sells handmade carpets. I told him I am a follower of Jesus and that I believe He is still alive and is transforming many lives—exactly as what is written in the Gospel. Then I asked him, “Why did you decide to become Muslim?” He thought I was joking and responded, “I did not decide to be Muslim; I have been Muslim since I was born.” “So, you did not think about it?,” I asked. He said it is strange you ask this, because “Two days ago, I saw a dream where I entered a mosque. It was void and dark, so I ran. I do not want to be Muslim anymore. Can I pray to Jesus now?” I told him he could. Then he prayed. After the prayer, he said, “Am I now considered a brother?” I told him of course he was now, and we hugged. The following day we connected him with a local missionary to continue his spiritual discipleship.

My encounter with Mohammed and its results pose serious questions for evangelicals to ponder: Who is Mohammed now? A convert to Christ. What did our team simply do in North Africa? Evangelize Muslims openly and clearly. What was so unique about what we did? Nothing at all. Why did we not speak with Mohammed about religious pluralism, the value of diversity, and mutual respect? Because the time that remains is very short to waste in irrelevant rhetoric while many Muslims are desperate to hear the Gospel of Hope. What if our North Africa team decided to follow the contemporary trend of some “evangelicals” and engaged in conversations about the weather and how wonderful Islam is and the values we can all learn from the Muslim prophet or the message of the Quran? Our brother Mohammed would have been the same, dwelling in his past belief system with no knowledge of what Christ has done.

Fellow evangelicals, evangelize, evangelize, and then evangelize some more. Preach the Word, and reach the world. Do not buy into contemporary sociocultural discourse and betray the truth of the Gospel. Jesus is unmatched. The Gospel is irreplaceable. Salvation in Christ alone is a must. There is no other Way to be saved but the Lord and Savior Jesus Christ (1 Tim. 2:5; Philippians 2:9–11; John 14:6). There is no other method but preaching the Gospel with words (Rom. 10:9). This unfortunate trend discourages the intentional proactive pursuit of Gospel proclamation and undermines the potential conversion of Muslims to Christ. While no follower of Christ would ever deny that hospitality, humility, peacemaking, and loving others are all strong Gospel values, this trend appears to miss the intentionality of Christ’s kerygma and the core of the Gospel: As you are going, preach, baptize, teach, and make disciples of all nations. 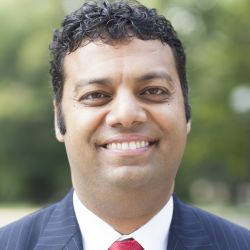 Ayman S. Ibrahim, Ph.D., was born and raised in Egypt. He recently completed his second Ph.D. in Islamic History at the University of Haifa, Mount Carmel, examining conversions to Islam in the earliest Muslim period. He is Associate Professor of Islamic Studies at Southern Seminary and director of the Jenkins Center for the Christian Understanding of Islam. His publications include The Stated Motivations for the Early Islamic Expansion and Muslim Conversion to Christ.