CONVERSATIONS AT THE WELL:
Scriptural Views of Other Religions

“Is there salvation in other religions?” This is a question that has preoccupied the conversations among American evangelicals in recent years amidst an increasingly religiously pluralistic society. A resounding “no” from the evangelical community has sounded out against the mainstream perspective on other religions in Western liberal democracies.

How might engagement of our religious neighbors take a different shape if we were to ask instead whether if there are elements of truth, beauty, and goodness in non-Christian religions? More importantly, what would it look like for evangelicals to insist that “salvation is found in no other name under heaven” than Jesus, while also seeking to be faithful disciples of Jesus who search the Scriptures for guidance in how we live alongside our religious neighbors? Is it possible that those very elements of truth, beauty, or goodness in the lives of their religious neighbors could play an important part in how evangelicals engage with them? If so, it is important that Christian discipleship remain under the authority of Scripture, so that being faithful to God remains at the core of who we are called to be and how we love our neighbors.

In this issue of Evangelical Interfaith Dialogue, Dr. John Goldingay and Dr. Nijay Gupta provide illuminating resources from the various ways in which both the Old and New Testaments speak about other religions. Rather than a static posture toward religious people outside the community of God’s people, there is a remarkable array of engagement revealed in the texts of Scripture. Social and contextual factors play a role in these different approaches, as does the health and witness of the community in those particular times and places.

Far from leading evangelicals to a position of relativism, respecting and listening to the diversity of Scripture’s witness yields tremendous resources for Christians today as we wrestle with how to be faithful disciples in our own particular contexts. 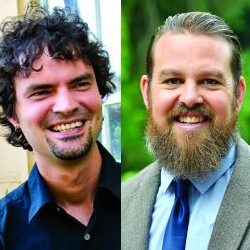 Matthew is a PhD student in Fuller’s School of Intercultural Studies. Cory is Jake and Betsy Tuls Assistant Professor of Missiology and Missional Ministry at Calvin Theological Seminary.