This year marks the unfolding of a presidential campaign in the United States of America. Events of the day become a tweet on Twitter. The recent campaign reminds me of the title of an old Western movie, The Good, the Bad and the Ugly. As you read that title, you may have images and stories of your own that fit these categories.

A tragedy occurs in San Bernardino, California and grief is amplified by fear, resulting in calls for closing the flow of immigrants and refugees by discriminating against those of Muslim faith. I wish I could say that I have seen evangelicals and other religious groups consistently providing a prophetic, compassionate witness; instead, I have heard and seen the good, the bad and the ugly from within the evangelical community.

One of the roots of what might be called “Islamophobia” is a lack of personal relationships and understanding with those of Muslim faith and as a result, a failure to distinguish the legitimate threat of terrorists from faithful Muslims. This failure to discern well leads to the labeling of persons and groups, which further distances Muslims and Christian communities.

If one of the root causes of indiscriminate fear is the lack of personal relationship and understanding, one of the key antidotes is for individuals and church communities to reach out and get to know persons of other faiths. One of the stories I still remember after 9/11 is of pastors who reached out to local mosques, which began a relationship journey. We live in a time where reaching out to others is vital if we are going to positively respond to the challenge of Jesus to love our neighbors as ourselves.

One of the ways to create and sustain an atmosphere where we are challenged to think of biblical responses is to pray and return to biblical passages that emphasize welcoming the stranger and even the alien within our gates or our borders. Liturgies should reflect the context in which we now live.

Lastly, a significant barrier to developing relationships can be to focus on our differences in our conversations and relationships. Of course, there are differences between Muslims and Christians such as how we view the uniqueness and salvific centrality of Jesus Christ. At the same time, are we able to hold these distinctions in tension with clarity and charity in relation to those who are also “image-bearers” of God and are loved by Him? 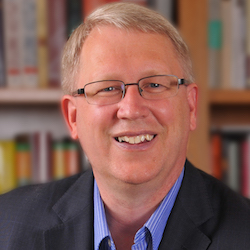 Rev. Jul Medenblik is a former Florida attorney, Chicagoland area church planter for sixteen years, who also held for four years the position of Point Leader of the Church Planting Development Leadership Team for the Christian Reformed Church in North America. He is currently serving as President of Calvin Theological Seminary in Grand Rapids, Michigan.