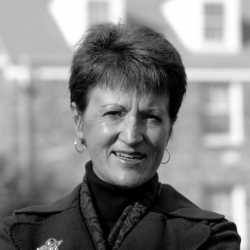 Shirley Mullen has served as president of Houghton College since 2006. Prior to arriving at Houghton, Dr. Mullen served at Westmont College for 23 years, first as a professor of European history and then four years as provost. During her time at Westmont, Dr. Mullen was the recipient of the Outstanding Teacher Award on three occasions. Dr. Mullen has earned two doctorates, one in history from the University of Minnesota and one in philosophy from the University of Wales. She is currently serving on the boards of Fuller Seminary, National Association of Evangelicals, Commission on Independent Colleges and Universities (New York State), CCCU (Council for Christian Colleges and Universities), and Allegany County United Way. Dr. Mullen’s extensive portfolio of historical, religious, and philosophical publications includes articles and papers on the works of David Hume, William Wilberforce, and Hannah More. Her current passion is communicating the significance and relevance of a Christian liberal arts education to the needs of our world in the 21st century.

Living the Mystery of Calling