“The only thing we have to fear is fear itself,” said Franklin D. Roosevelt in his inauguration speech as the 32nd president of the United States. At that time, the “thing” Roosevelt was insinuating not to fear was the economic crisis of the 1930s. Today, America is the largest economy in the world, and by far the largest military superpower, but Americans are not without fears. A wave of Islamophobia has gripped the social and political landscape, exemplified by popular support for presidential frontrunner Donald Trump, and his anti-Islamic policies.

While everybody might agree that generalizations are dangerous, and therefore not all Muslims are the same, media outlets choose to highlight the radical side of Islam, which, intentionally or not, sends a persuasive message that all Muslims are violent evildoers. As such, anyone that sides with Islam or sympathizes with Muslims is betraying peace and humanity. The worst expression of American Islamophobia condemns every Muslim as a terrorist, and charges those who have Muslims friends with treason. So pervasive is this attitude that President Obama, although he openly embraces Christianity, was harassed for simply being a descendant of a Muslim family, as if being Muslim is a crime, or having a Muslim president is unconstitutional!

The issue with American Islamophobia is that it is not just a national problem confined to the North American continent. In the post-Cold War era, being the superpower that America is means that America’s problems are also the world’s problems. Fearing Islam, and anything that represents or is connected to it leads to irrational and hostile behavior. Concepts like “war on terror” and “axis of evil” emerge and form a narrative that warrants attacking Muslims. It gets messy when we consider that nearly a quarter of the world’s population is Muslim. It is especially problematic in the Middle East, home of Islam’s holy sites, and where the U.S. has various interests to protect.

America’s antagonistic attitude towards Muslims distorts the image of Christianity in the Middle East, even though not all Americans are Jesus-loving, Bible-reading, God-fearing Christians. In the Middle East, religion is so intertwined with culture that secularism is almost an alien concept. Therefore, from a Middle Eastern perspective, America must have a national religion, and for good and bad reasons, Christianity is perceived to be that religion. So, when the U.S. follows anti-Islamic policies, it creates a skewed image of Christianity in the Middle East. Perhaps disciples of Jesus in America feel immune to such criticism, but that does not acquit them from the responsibility to redress their country’s fear of Islam.

The issue here is not whether Islam is a violent or peace-loving religion. Religion is subject to interpretation, and for every Muslim fanatic in the world, you can find at least one or two moderates. Nor is the issue denial of harm done in the name of Islam. Without a doubt, a lot of terrorist attacks have been committed in the name of Islam. At the same time, much good has also been done by devout Muslims. The pertinent question that I believe needs to be asked is this: what is at the root of American Islamophobia, and how should Americans respond to that?

To summarize, it appears to me that Americans value their national security above all else, and when external forces—be it communist ideology, economic crisis, nuclear armament, or Islamic terror— threaten their stability, the nation reacts defiantly out of horror. Of course, it is virtuous to love peace and favor stability, but to what extent will Americans go to secure their own peace and stability, and more importantly, at what cost? I think the problem with American evangelicals is that they have become so engrossed with their national interests, they have forgotten that their primary calling is to live as citizens of the Kingdom of God. In the Kingdom of God, justice and mercy trump national security and self-interest. American evangelicals err when they do not trust God to protect them, and instead resort to other means to secure their status, often at the expense of other people.

With love I say the following: American evangelicals must not react to Islamic terrorism out of fear, but pause and think rationally about why they are being attacked. They ought to repent, on behalf of their countrymen, for putting their trust in their own might, not in God. They should serve the Kingdom of God before their national any and all religions, American evangelicals can embody their heavenly citizenship, and ultimately weaken the grip of Islamophobia. Essentially, the challenge is to conquer fear by submitting to God and to resist evil by serving justice and extending mercy around the world.

Finally, American evangelicals should not forget that many Christians in the Middle East also suffer from Islamophobia, albeit for different reasons than their American brothers and sisters. We need your help in that regards as well. Help us remember that no servant is greater than his teacher, and that suffering is part of our call. Instead of propagating fear, encourage us to love our Muslim neighbors as ourselves. Pray for us to endure the hardships before us, and not run away from them. Support us as we serve our communities, and show us how to treat people equally. Teach us how to give generously, and expect our reward from our Father in heaven.

Together, let us not fear those who kill the body but who cannot kill the soul, and instead fear and serve Him who has the power over every body and soul. 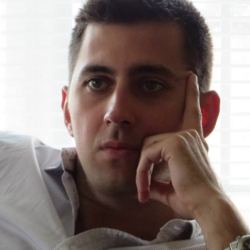 Elias Ghazal divides his time working at the Arab Baptist Theological Seminary, Middle East Association for Theological Education, and Centre on Religion and Global Affairs. He is passionate about seeing the Church fulfill the mission of God in the world. Elias lives in Lebanon with his wife Joyce, and his two children Lara and Karl.