I have never really understood why some people look at dialogue and mission in terms of either/or. Evangelical Christians in particular (whose theology I share) have shown an unwarranted suspicion of dialogue simply because it has been used by some as a substitute for mission. These words should never be divorced: not only are the two words compatible, but they must shape each other.

Growing up in a Muslim-majority society as a believer in God and Jesus Christ, I knew that I was different and gradually realized that I have something very precious to share with my Muslim friends.

I first had the opportunity to discuss religion with my Muslim peers at school. I was surprised that many Muslim schoolmates were very interested to know more about Christianity and Christians. I, too, wanted to get a better understanding of Islam. A unique opportunity presented itself when the teacher of Islamic religious education accepted my request to attend his class. He would regularly ask me to give my views as a Christian on certain topics, and the discussions often extended beyond the classroom.

In Paris, after I completed a degree in Christian theology, as an Arab Christian I felt a compelling need to relate my faith to Islam. This was reinforced when I worked for the International Fellowship of Evangelical Students (IFES) amongst Arab and Muslim students. They would ask me challenging questions that I had not seriously considered as a theological student. Hence it wasn’t difficult for me to find research topics for my Islamic Studies dissertations at the Sorbonne. Studying Islam made me re-examine my major Christian beliefs, which I had often taken for granted.

For 12 years I worked for the mission-oriented All Nations Christian College, in England. I was in charge of its Islamics course to which I invited a Muslim lecturer to contribute each year. His or her talks provided opportunities for genuine and often animated interaction between students, the speaker, and me.

For three years now I have been working for World Vision, whose mission statement echoes what Jesus proclaimed at the synagogue in Nazareth (Luke 4:17-19).1 This Christian aid organization operates in 20 Muslim majority countries, with majority Muslim staff in places like Afghanistan, Mauritania, and Somalia. Providing orientation on Christianity and Islam to all our staff has been a fascinating experience, as we engage on faith issues and learn from each other about our respective faiths and often about our own! Without ignoring the distinctive beliefs of each tradition, the common ground we have enhances our work for the good of the communities we serve.

I take dialogue to mean a deliberate effort to engage genuinely and respectfully with each other;   willingness to listen and understand; a readiness to learn and be challenged; a desire to relate to, communicate with, and be understood by one another. In Christian-Muslim dialogue, the focus is the Christian and Muslim faiths and their implications for individuals and communities in this life and the next.

For many centuries Western Christians have ignored or confronted the Muslim world. Ignoring Muslims is no longer an option in our “global village” where Muslims and Christians live next to each other. Some Christians seek to reach out to Muslims in confrontation, attacking Islam in a war of words. This approach is counterproductive as it usually inspires Muslims to become more radical in their beliefs, and often provokes an offensive reaction, too—Muslims attacking Christianity even more vehemently. A polemical engagement with Islam is also incompatible with “the gospel of peace” (Ephesians 6:15), which is about love, reconciliation, and forgiveness.

Christian-Muslim dialogue often takes the form of apologetics for at least two reasons. First, Christianity and Islam make conflicting truth claims about God’s revelation, which for Christians reached its climax in Jesus Christ, and for Muslims, in the Qur’an. Second, Islam acknowledges Christianity as a God-given religion; at the same time, it rejects the core of the gospel (the divinity of Christ, his crucifixion, and resurrection). Christian apologetics is about giving a “defense” of the Christian faith to those who attack it (see 1 Peter 3:15). This, however, should be done with “gentleness and respect.” Even in a heated debate the Christian apologist must refrain from polemics, personal attacks, and derisive arguments about Muslims and their religion.

Scope and Outcomes of Dialogue

Dialogue should be understood more broadly than verbal engagement. It is a way of life: an open attitude toward others, seeking to reach out and to welcome people, including those who are different or even antagonistic. Understood this way, Christian-Muslim dialogue is an encounter at three levels, like Jesus’s encounter with the Samaritan woman (John 4:1-26).

First, Christians and Muslims meet each other as human beings, with common needs and aspirations, joys and sorrows, hopes and struggles.

Second, they meet as monotheistic believers, sharing many beliefs and ethical values, despite differing understanding of these.

Finally, Christians and Muslims claim to be God’s witnesses. An integral part of dialogue is removing the huge misunderstandings we have about each other’s faith, so bearing witness.

A fruitful dialogue is measured by its outcomes: a better understanding of each other’s faith and of one’s own. It should also lead to better relationships between the two communities, strengthening their social commitment. Dialogue is also an excellent school for tolerance. It helps us overcome our ignorance, our prejudice, our self-centeredness, our fanaticism, and our spiritual pride.

Is conversion a legitimate outcome to dialogue? Yes: it is perfectly legitimate for believers, who take seriously the exclusive claims of their religion, to try to persuade others. There is nothing wrong with hoping, and even expecting, that some people, having carefully examined these claims, will make a life-changing decision as a result of a transparent and free dialogue. Unless we accept conversion as a possible outcome for dialogue, our claim to be tolerant remains unproven.

Muslims find in their scriptures a lot about Christianity and Christians, while there is nothing in the Bible about Islam. However, Jesus gave us a clear and helpful command about how we should relate to people in general: “In everything, do to others what you would have them do to you, for this sums up the Law and the Prophets” (Matthew 7:12). How do we want Muslims to relate to us and to our faith? I would like here to highlight some implications for us Christians who want to engage missiologically with Islam and Muslims.

First, as an expression of loving our neighbors, we must show respect to Muslims and to what is at the heart of their identity, i.e. their Prophet, their religion, and their scriptures. This attitude requires avoiding catch questions, derogatory comments, and inflammatory language. True: some Muslims do not comply with the Qur’anic recommendation to argue with Jews and Christians “in the best possible way” (Qur’an 29:46). But this is no excuse for Christians to indulge in vitriolic criticism of Islam.

This does not mean abstaining from any criticism of Islam, but we can put critical comments in the least offensive language and substantiate them. Jesus enjoins his disciples to look critically at self-proclaimed prophets (Matthew 7:15-20); in the same breath he also commands them to take a long and critical look at themselves (Matthew 7:1-5, 21-23).

Second, we should do our best to be fair. This means, for instance, when comparing Christianity and Islam, having a right balance between highlighting similarities and pointing out differences, so that our picture is not distorted. Fairness also requires comparing like with like: not comparing moderate Christians with extremist Muslims, ideal Christianity with popular Islam, beautiful texts in the Bible with problematic passages in the Qur’an, and vice versa. In this, Christians must not ignore the Old Testament when looking at issues such holy war, polygamy, penal code, prophethood, and theocracy.

Finally, we need to study Islam and befriend Muslims. In interacting with Islam, it is critically important that we use Islamic material in an appropriate way. We should adopt a learning and humble attitude. We need to acknowledge that the Muslim community is the custodian of its own tradition: they are the authoritative interpreters of their scriptures. Some approaches tend to Christianize Islam, others to demonize it; neither does justice to Islamic teaching, which should be considered on its own merits.

A Christian perspective on Islam ought to be incarnational, sympathetic, and critical. It should be concerned more with Muslim people than with Islam. As disciples of Jesus Christ, we are under a double obligation to love our Muslim neighbors as ourselves and to share the good news with them. Not only do the two commands go hand in hand, but the second is best carried out as an expression of the first. Dialogue is indeed the privileged way of “speaking the truth in love” (Ephesians 4:15) to Muslims as well as to other religious communities.

A version of this paper first appeared as a part of the Lausanne Movement Global Conversation, April 3, 2010.

1World Vision defines itself as “an international partnership of Christians whose mission is to follow our Lord and Savior Jesus Christ in working with the poor and oppressed to promote human transformation, seek justice and bear witness to the good news of the Kingdom of God.” 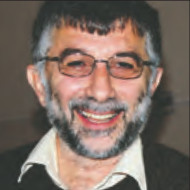 Chawkat Moucarry serves with World Vision International as the director for interfaith relations. An Arab Christian from Syria, he currently lives in the U.K.