While traveling recently through North America, it struck me frequently that normal Christian folk are increasingly face-to-face with people of other faiths, especially Muslims but also with Hindus, Buddhists and others.

I watched Somali women line up for childcare outside a center in Seattle, WA. I observed Syrians picnicking in a park in Langley, BC, Canada. Even my Tennessee and Carolina stops were punctuated with stories and conversations about Iraqi and Rwandan neighbors and ESL classes for refugees.

It was good for me because I stopped watching news media and listened to people. It struck me that real people are daily presented with opportunities for witness to the nations that, a generation ago, were available only to “missionaries.” The “mission field” has moved into our back yard. I love that!  It’s God’s people (all of them or any who care to) living on mission in normal day-to-day relationships.

Given that wonderful reality, I wanted to suggest some guidelines for relating cross-culturally in ways that reflect the beauty and grace of Christ’s gospel. I make no claim to be an expert. I’m on the journey, just like you, trying to work this out in my place. Feel free to add to the conversation through comments.

The brutal truth is that most of what we know of other cultures and faiths is mediated through the media. The great thing is that we can now hear their story directly from them.

I was dumbfounded recently when a friend in the US commented that he had heard that “they” are bussing Islamic militants from Lebanon back into Syria. Because I live in Lebanon and because I know Syrian refugees there, I knew the comment reflected a media bias diametrically opposed to on-the-ground realities. Buses are returning refugees to Syrian rebel-held areas, but these Syrians are mostly victims of militant groups returning to very unsafe conditions in northern Syria (See here or here). My friend’s comment missed the human tragedy of the event and the fact that these Syrian families are, once again, being exploited by power-brokers in the region.

Embracing face-to-face engagement will mean we adopt an innate skepticism of media outlets and their spin on news events. While I am thankful for a free press, I also realize that the press deals in the outrageous because it sells. The most inflammatory events get the most airtime and the spin is often directed to a demographic which is predisposed to fear-mongering and/or partisanship. Getting away from our screens and into face-to-face conversations will help restore a realistic understanding of the world’s peoples. We will see that we share more than we ever dreamed by virtue of our common humanity.

Second, let us ask questions that arise from a holistic respect of human experience.

I realize that many well-meaning Christians will be concerned to present a gospel witness to those of other faiths and worldviews. I am becoming convinced that this predilection is usually counterproductive if it is not grounded in a holistic respect of the human experience of the person we encounter. What do I mean?

When the “angel of the LORD” encountered a fugitive slave woman in the desert, he opened the dialogue by calling her name, “Hagar, servant of Sarai.” He then asked two questions: “Where have you come from and where are you going?” The questions opened two horizons for Hagar: her history and her future or her past story and her future dreams.

Engaging with real people with a sincere desire to know them as persons frames the relationship in dignity and honor. Our first instinct must not be to “give” something. It must be to recognize the innate gift of God given to every human being who is made in the divine image. This person is worthy of honor. She has a story that has made her who she is today. He is pursuing aspirations and dreams that reflect something of the image of God. We all desire to be treated with dignity, don’t we?

Third, let us establish reciprocity and mutuality in the relationship.

Jesus has an encounter with an immoral woman from the despised people group of his day. His first move is to ask her to give him something he cannot provide for himself: “Give me something to drink.” She notices he has nothing to draw with and the well is deep, but she also notices that this Jewish man is speaking to her, a Samaritan woman. Such things were not done. Jesus breaks all the social rules of engagement but he also allows himself to receive from this woman, presumably before they continue their conversation…quite an amazing lesson from the designer of human personality!

We are cursed with privilege, at least many of us are. I am speaking of monetary, educational and social privilege—things we may have worked for, but are nevertheless a result of opportunities given us largely because of where we were born or the family that raised us.

Jesus could receive hospitality in Bethany because he had no place to lay his head. The question haunts me: is there anything I can receive from the Somali woman, the Eritrean maid, the Egyptian gas station attendant? Anything?

If I can’t, then I have yet to understand the imprint of God’s image stamped in human beings.

True relationships are reciprocal. We give and receive and we probably give most by receiving. So, let’s put away our wallets and ask a Syrian how to make hummus or have him explain the complex history of his amazing country. Receive.

Fourth, let us spontaneously speak of and act out of our faith in Christ.

Many of us learned to “present the gospel” through the Four Spiritual Laws, Evangelism Explosion or the bridge illustration. Those things have their place, but when working across cultural and religious divides, best to forget them.

First, forget them because it makes the person of another faith or worldview feel targeted. She feels that way because she is, in fact, targeted and because she’s been warned about those Christians who will try to brainwash her. It reduces people to a religious commodity, saying, in effect “I want you to affiliate with my religion”—hardly the life-giving message of Jesus! It also assumes that the person in front of me is a blank slate or a shapeless lump of clay with no preconceived ideas of God and no spiritual experience to draw from. All I need to do is provide the information and, presto-change-o, this person will believe like me! This tragic misunderstanding of human nature and the depth of religious conviction in the formation of values will likely have disastrous ramifications.

Forget the canned presentations because following Jesus embraces every aspect of life from family interactions to work relations to leisure. We need to learn this way of speaking of our faith. Muslims do a similar thing when they invoke God in their entries and leave-takings. They seek his blessing for travel and illness. They speak his name when recalling a deceased relative.

If our lives are God-soaked and grace-filled, we will not struggle for opportunities to express our praise and extol his grace and beauty. Generally, I find Muslims appreciate people of faith when they speak honestly and humbly of their relationship to God and demonstrate their faith through prayer. Muslims hold Jesus in very high esteem and will usually react positively to quotations of his teachings or relating his miraculous works. They also know of Moses, David and many other Biblical prophets. Our faith should provide a rich deposit of conversation topics, provided we haven’t neglected the first three guidelines mentioned above.[i]

Fifth, let us not drop out.

Most of us like quick results. Relationships can become transactions. We start a friendship because someone told us we should. Big mistake. If we’re in it to get something, our friends will know and find something better to do.

I like the “journey” metaphor. I think of my own walk with Christ as a journey. I have known many Christ-followers who once considered themselves staunch Muslims. Inevitably, their journey had many twists and turns as they soaked in the Scriptures and encountered multiple disciples of Jesus along their path. We are only one link in a long chain of relationships that God will use in our friend’s life.

Part of this is not starting a relationship at a pace we can’t maintain. Relationships take time and develop organically, like a plant, not mechanistically. If a once-a-month game of squash is what you can manage, do that. If your capacity is a quick conversation with the supermarket stock boy, then go for that. The Arabs say, “stretch your feet only as far as your covers.” Don’t take on more than you can sustain.

Finally, let us seize the day.

The 21st century offers us unique opportunities for following Jesus among the world’s peoples. Let’s jettison fear and put ourselves on the playing field. If every Christ-follower in North America, Europe, Australia and the Middle East determined he or she would befriend one person from another faith, culture or worldview, we would literally change the world. Now there’s a novel idea—disciples of Jesus changing the world!

[i] For a strong Evangelical statement on the necessity and complexity of Christian engagement with Muslims, See the Accra Statement created by the Lausanne Movement. 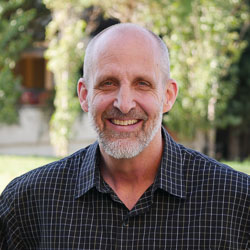 Mike authored Fresh Vision for the Muslim World and has worked in various North African and Middle Eastern countries. Most recently he served as Professor of Discipleship and Biblical Theology at the Arab Baptist Theological Seminary in Beirut, Lebanon. He did his doctoral research in the areas of Trinity and Christology in Muslim-Christian engagement.