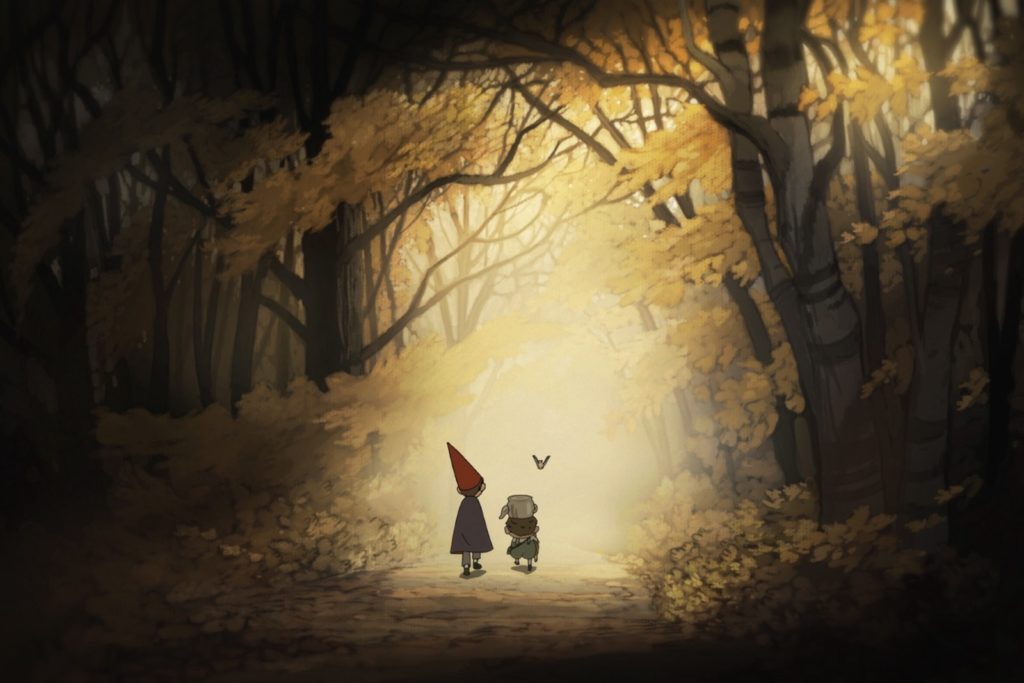 If you set the Americana fairy tale of Big Fish and the absurd humor of Adventure Time inside the Hundred Acre Woods, you might get Over The Garden Wall, an animated miniseries from Cartoon Network about Wirt and Greg, two lost brothers lost in a forest looking for their home. As the show begins, the narrator tells us what kind of forest they’ve stumbled upon: the woods of the Unknown, a mysterious place “lost in the clouded annals of history…where long-forgotten stories are revealed to those who travel through the wood.”

Wirt and Greg quickly meet Beatrice, a guileful bluebird that convinces them to seek Adelaide of the Pasture, the lady of the woods and a potential key to find their way home. With a destination charted, the show unfolds episodically. As the trio wanders closer and closer to Adelaide, each location presents new characters and unique challenges. They negotiate with blank-faced (and terrifying) pumpkin people of Pottersfield, they rally Beatrix Potter-inspired students to save a school house, they sneak through a ferry of well-to-do frogs, and even seek a blessing in a celestial city inspired by 1930s Silly Symphonies.

These stories happen in an autumnal and delicate setting, and while the character design is stripped down, small features like Greg’s massive pupils or Auntie Whisper’s oversized body add a sense of surrealism to the characters and pastoral scenes (never mind the talking animals). Taken together, these ten episodes add up to a whole story, and Patrick McHale, the show’s creator, compares the structure of the miniseries to a quilt: “Every episode had its own unique color and pattern, but overall it was supposed to become one quilt that all works together.” While some episodes feel hasty and too simply resolved (this is in part because some episodes had to be combined for the production budget), overall the woods of the Unknown become a believable world that seems to extend past the show itself.

The strongest aspect of the show—and what will keep adults returning for multiple viewings—is the larger narrative told through the episodes. At the very beginning, Wirt, Greg, and Beatrice meet the Woodsman, a character bound by grief and literally burdened by a woodpile slung on his back. He warns them of The Beast, a creature who stalks through the woods bringing fear and “the death of hope.”

The threat of this unknown creature hovers over the first few episodes until “Songs of the Dark Lantern,” an episode with two important turning points. First, in a bizarre tavern, Wirt receives a name fit for “a traveler on a sacred journey,” and Wirt and his two companions realize their lostness has a deeper purpose than they expected. Second, outside the tavern, we meet the Beast for the first time. As the Woodsman chops wood, a silhouette of a cloaked figure with antlers and glowing eyes appears. Their hushed dialogue reveals deeper threats in the Unknown than simply losing your way–a moment that propels the show toward an inevitable meeting between the Beast and the children.

Through the last few episodes, a change in setting gives a growing sense of dread and help show how truly life-threatening the stakes have become. Leaves fall, snow drifts arrive, and the Unknown, once a vibrant forest, becomes quiet and threatened with death. It is in this setting that Wirt and Greg finally confront the Beast and see if they have the courage to finally pass through the Unknown.

Taken as a whole Over The Garden Wall is a kind of modern day fairy tale, and understanding its deeper meaning starts with an essential interpretive lens: the setting of the Unknown. Both capitalized and set apart with an article, these woods are an manifestation of a timeless and liminal place. Like the Witch’s house in Coraline or the Pale Man’s lair in Pan’s Labyrinth, the Unknown is a space that both threatens the characters with danger and offers transformation if they’re willing to journey through it. Patrick McHale described the Unknown like this:

There are stories that were once told, and are gone forever. Words that have been spoken and forgotten. Ideas that have been thought, but lost. And there’s plenty of stuff mankind has never thought of, and will never think of. The Unknown is all that stuff. If there is more to the universe than what humans can perceive (and of course there is) then maybe everything that can ever be conceived is floating around somewhere unseen and unknown in some abstract way.

Without intending to, McHale comes close to the psychological definition of the unconscious—all that is beyond conscious awareness, especially the potentialities repressed within us. It is only when suffering forces us to look at our limitations do we begin to glance at these darker parts of the psyche. It’s why the anonymous author of The Cloud of Unknowing viewed our lostness in these painful moments as pure gift—our lack of head knowledge is the beginning of a much deeper journey. In Over the Garden Wall, each of the main characters struggle with what they do not know—their lostness propels them forward and becomes an opportunity for growth. Wirt, uncertain of his direction, has to opportunity to confront his detachment and despair. Beatrice’s uncertainty about her family’s future leads her to deceive and control—actions she must face within herself. Even Greg, who’s naivety brings both wonder and innocence to the trio must reach a new level of maturity to save those he loves. All of these transformations are only possible in a sacred journey through the Unknown—a path that inevitably leads us to an encounter with the Beast.

If the woods remind you of the unconscious, the Beast seems like its shadow—a negative force literally fueled by whomever he can trap with his deceptively soothing voice. Psychologically, the shadow is the accumulated repressed material within us. If we’re kind people, you can bet our shadow is the mean-spirited anger; if we’re chaste, our shadow is sensual. There is nothing more important in the spiritual life than acknowledging and integrating with our shadow (or in the words of Christ: loving our enemy). By confronting and loving what we find, we reintegrate these parts of ourselves and finally become more whole people, capable of more compassion and vitality. So, in this show, Wirt and Greg must finally confront the Beast, but more than annihilation, the Beast threatens them with inertia, hoping to trap them in a cycle of guilt and fear just as he trapped the Woodsman. When we reach the climax, it is only through loss, through vulnerability, and through courage that the characters have the chance to finally expose the Beast for his true identity and find safe passage through the Unknown.

It’s tempting to push these categories too far, but the psychological and spiritual resonances are there—and fitting for a contemporary fairy tale. Consider Thomas Merton’s famous prayer:

My Lord God, I have no idea where I am going. I do not see the road ahead of me. I cannot know for certain where it will end. Nor do I really know myself, and the fact that I  think that I am following your will does not mean that I am actually doing so. But I believe that the desire to please you does in fact please you. And I hope I have that desire in all that I am doing. I hope that I will never do anything apart from that desire. And I know that if I do this you will lead me by the right road though I may know nothing about it.

He doesn’t ask for his confusion to be solved or whatever clouds his vision to be removed, Merton trusts that his lostness will lead to transformation—God, in fact—if he has the courage to keep moving forward. In a way, Over The Garden Wall can be viewed as a visual expression of this journey; it offers is a kind of spiritual cartography in a child-sized script, a pilgrimage through the unknown where Wirt and Greg—and us—can recognize our spiritual potentials in the unknown.