My favorite sermons are the ones that surprise me. You know what I mean. The preacher takes me down a familiar biblical path, pointing out scriptural terrain we all know well. And then it happens—a nuance I never noticed before, or an application I did not see coming. Something about the sermon gets my attention and makes me see the scripture differently. I like to hear sermons that surprise me and I like to preach sermons that surprise people.

At the same time, my least favorite sermons can also be the ones that surprise me. Sometimes I want the Bible to confirm what I already know. Sometimes I don’t want the preacher (or the Holy Spirit) to teach me something that challenges what I already know—especially if this new knowledge pushes me to reexamine my behavior. I don’t mind learning something. But sometimes I don’t want to have to change how I act. It makes me uncomfortable.

I try to keep this in mind when I preach. I want people to learn something—even something that makes them uncomfortable. But I don’t want to push them so fast that they tune me out. It’s a delicate balance between pushing them enough to see them grow, but not pushing them so fast that they ignore the sermon. For that reason, I used to avoid preaching on topics that had political implications. It didn’t seem to be worth the grief. The people that agreed with me would leave church no different than when they came, and the folks who disagreed with me would too easily ignore the sermon.

But then the Holy Spirit (coming once again in the voice of my wife) challenged me. Do I believe that what we believe should influence how we vote? Of course. And do I believe that sermons should help people clarify their beliefs? Um, yes . . . then shouldn’t our sermons talk about politics? Well, okay. We can either assume that the beliefs that affect voting are so private that the preacher should never talk about them, or we are going to have to find a way to preach about faith and politics without alienating people.

So I decided to give it a try. Not long ago, I preached on a topic I knew was going to make many in my congregation uncomfortable. The passage had clear political implications. And I felt the dilemma. How does one preach in such a way that congregants remain open to changing their minds? I do not claim to have a definitive answer to that question. I can, however, explain what I intended to do, describe what I did, and then evaluate how effective the sermon was. My goal is not so much to hold my actions up as a model as it is to stimulate thinking about how to make similar attempts.

WHAT I INTENDED TO DO

I think it is easier to preach on uncomfortable topics in an evangelical congregation than it is in other kinds of churches. In a liberal congregation, everyone is entitled to an opinion and the preacher’s is just one voice among many. But in a conservative church, we have agreed on a standard. We all appeal to Scripture. In the evangelical churches I have known, we have all agreed that we should change our behavior to conform to Scripture. We may argue about what the Bible means (and, boy, can we argue), but we all come with a common commitment to obeying the voice of God as conveyed in Scripture.

So I began my preparation for this potentially uncomfortable sermon with one basic idea: to get people to see what Scripture says. I did not want to get into a debate about the implications of Scripture. I wanted to start by challenging an unquestioned assumption about Scripture itself.

The topic I chose was immigration reform—a particularly hot topic in my corner of Southern California. I did not want to debate particular immigration proposals or to mention particular candidates. I wanted to talk only about the Bible. My goal was to introduce an Old Testament phrase that was not a part of the common lexicon of my congregation, but was absolutely central to the message of the prophets: “widows, orphans, and aliens in your midst.” I wanted them to see that Old Testament prophets repeatedly demanded that God’s people protect the most vulnerable people in their society—summarized by “widows, orphans, and aliens in your midst.” The key, of course, would be how people came to understand the Hebrew word for “aliens.” I believed that if they came to understand the meaning of that word in its context, it would be a short step to connect that word to the aliens living in our midst. In other words, I knew that if they heard the Bible speaking—rather than my voice—that they would be far more open to changing their minds.

The sermon had two main points. First, the nation was a nation of immigrants: God told them to remember that their ancestors were exploited in Egypt and commanded them to treat aliens in their midst as they wished they had been treated in Egypt. Second, the sermon took the congregation on a word study of the Hebrew word ger, which is translated here as “alien” or “sojourner.” I preached with a much more scholarly style—quoting sources and explaining fine points from the commentaries—so that the sermon was about what the word meant and not about my opinions or the inferences I draw from the word. We talked about the context surrounding Deuteronomy’s writing—about the wars and the refugees fleeing from other countries.

I then asked them to take out their pew Bibles and turn to Deuteronomy 24, attempting to let the text speak as much as possible. Verses 14 and 15 paint a picture of a day laborer who is easily exploited and who has no recourse—elders would side with their countrymen if charges were brought. Verses 17 and 18 go on, “Do not deprive the alien or the orphan of justice or take the cloak of the widow as a pledge. Remember that you were slaves in Egypt.” In other words, you were aliens once and you should remember what it means to be an alien. This section of the sermon ended with a tour of passages in Deuteronomy with the theme, “Do not oppress the widow, the orphan, or the alien in your midst.”

By this time, I was fairly sure that most people in my middle-class, suburban congregation had heard at least something of what Deuteronomy was trying to tell them. I could guess that at least a bulk of them had a question—one that was prompted by the local political debates. So I asked it for them. “But what about illegal aliens?”

An alien in the Old Testament, I told them, is a foreigner who did not belong, who took menial, day-to-day work (if they could find it), and who was an economic burden on the community. Scripture does not distinguish between legal and illegal aliens because they were all illegal aliens—Abraham, Jacob’s children in Egypt, the people Joshua led into Canaan, Ruth the Moabitess. None of them belonged.

The sermon ended without drawing present-day political implications. I told the congregation I would leave conclusions to them, but I emphasized three main points in Deuteronomy: do not take advantage or exploit widows, orphans, or aliens; provide for widows, orphans, and aliens (the book of Ruth turns on the willingness of a righteous Boaz to do just that); and, finally, be like God—“For the Lord your God is God of gods and Lord of lords, the great God, mighty and awesome, who shows no partiality and accepts no bribes. He defends the cause of the orphan and the widow, and loves the alien, giving him food and clothing. And you are to love those who are aliens, for you yourselves were aliens in Egypt” (Deut. 10:17–19).

HOW IT WORKED OUT

My goal had been to get the people of my congregation to make the connection between the aliens of the Old Testament and the aliens of today—and perhaps to see that we, too, are a nation of immigrants. My assumption was that this congregation honors Scripture enough to feel the prick when their own views do not align with the Bible.

There is, of course, no way to know what effect any sermon has, but there were signs suggesting that some people heard what they did not want to and had the integrity to consider it. As one woman came to shake hands at the door, she had her Bible open and was pointing at Romans: “But the Bible also says to obey the government’s authorities.” Weeks later she said something that made me realize she was still chewing on it. And, in the end, that’s what a preacher hopes to hear. 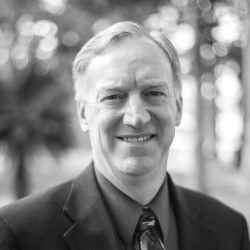 Scott Cormode is Hugh De Pree Professor of Leadership Development at Fuller, and previously also served as academic dean and as director of innovation.