Recently one of my upcoming appointments caught my attention. My secretary had entered a member’s name, followed by the cryptic “concerned about social justice” on my Outlook schedule. I’d enjoyed a long but casual relationship with this person. The most time we’d spent together was our naive attempt to be a predominantly Asian American gospel choir. We were both in the baritone section, and due to his general lack of pitch-awareness and inability to read music, I spent most rehearsals parked right next to him, trying (in vain) to influence him mainly by singing our part clearly and as written by the composer. One definite outcome of our spending this time together was a greater sense of community and closeness, even if we never were able to synchronize all of our notes.

The day arrived and he lowered his large frame into one of the chairs across from my desk. After several minutes of pleasantries, I gave him the opening to get into the reason for our time together. “So what’s this concern you have about social justice?”

“I was sitting there on Sunday, enjoying your message, when all of sudden you mentioned ‘social justice,’ and I became very confused. After all, ‘social justice’ is what the Black Liberation Front was pushing in the Sixties. It’s code language for Marxism. For the life of me, I can’t understand why you would endorse something that clearly has its roots in Marxism.”

I first thanked him for coming so quickly to me with his concern and then proceeded to explain how “social justice” is just one of the current ways to talk about the ancient emphasis in the Bible for God’s people to care for the overlooked and the oppressed. That even though some media-types have been directing people to leave their churches if they’re preaching about social justice (“because it’s anti-American”), Jesus clearly called his followers to use whatever power or privilege they might have to help those who don’t. I paraphrased the parable of the shrewd manager (Luke 16) to show that Jesus clearly taught that the “haves” would be wise to bless and befriend the “have nots” now because our roles will be reversed in heaven. I finally shared that our newest missional endeavor to work with a reforestation NGO is a great example of ordinary people coming together to heal the earth. But it’s also one where many local people who are poor find employment through this effort and are able to save and pool their money to build their own schools and hospitals. “We are choosing to be involved in social justice efforts that empower and educate people to take responsibility for themselves and their communities. Many of them just need help to get over the hump. This is not Christian welfare and it’s a far cry from Marxism. This is and has always been God’s justice-agenda.”

He left my office feeling much better about our church’s commitment to social justice.

Our church was born in 1925 as an outreach to recent Japanese immigrants struggling to find traction in a hostile new land. So our roots were established in the soil of social justice, as the White American Baptist missionaries reached out to our beleaguered forebears with the gospel of love and justice. And when Japan attacked Pearl Harbor on a sleepy Sunday morning in 1941, long-simmering “yellow peril” xenophobia had permission to emerge from the shadows. Much like the nationwide panic and rage that followed the attacks on September 11, 2001, the post-Pearl Harbor hysteria resulted in Executive Order 9066, which empowered the federal government to arrest 120,000 mainly Americans of Japanese ancestry living on the West Coast and imprison them in stark and dreary “relocation camps,” even though this was clearly unconstitutional. Most people lost everything they owned. Our church “disappeared.” Yet when the war ended not one confirmed case of espionage was ever filed. Years later, during President Reagan’s time, the federal government issued an official apology and paid a symbolic reparation to each affected individual or surviving family.

Los Angeles, California, April 1942: Japanese Americans at Santa Fe Station gather by the baggage car in preparation to board a train bound for the internment camp at Manzanar.

On February 19, 1942, during World War II, U.S. President Franklin D. Roosevelt signed U.S. Executive Order 9066 authorizing the Secretary of War to prescribe one-third of the continental United States as “military zones”—an order that paved the way for the relocation of Japanese Americans to internment camps.

Though EO9066 did not name any nationality or ethnic group other than “foreign enemy ancestry,” it was applied primarily against Japanese Americans or AJAs (Americans of Japanese Ancestry), some 120,000 of whom were incarcerated for the duration of the war. Of the Japanese interned, 62% were American citizens, and all persons with Japanese ancestry were removed from the West Coast and southern Arizona, as well as other parts of the country. Americans of Italian and German ancestry were also interned, along with people of Italian ancestry, and some Jewish refugees. A few members of ethnicities of other Axis countries were interned, but exact numbers are unknown.

EO9066 was rescinded by President Gerald Ford in 1976, and in 1980, Jimmy Carter signed legislation to create the Commission on Wartime Relocation and Internment of Civilians (CWRIC), intended to conduct an official study on the impact of the forced relocation on Japanese Americans. In 1982, the CWRIC concluded that the incarceration of Japanese Americans had not been justified by military necessity, but was based on “race prejudice, war hysteria, and a failure of political leadership.” In 1988, the Civil Liberties Act of 1988, based on the CWRIC recommendations for an official government apology, redress payments of $20,000 to each of the survivors, and a public education fund, was signed into law by Ronald Reagan. In 1989, George H. W. Bush signed an appropriation bill authorizing payments to be paid. In 1990, nearly half a century after the internment, surviving internees began to receive individual redress payments and a letter of apology.

Today, the majority of our members and regulars aren’t (a) Japanese-American, (b) poor and maligned, and/or (c) without power or access to power. What might have been true for the church’s pioneers and our own predecessors is simply not true for us today. Most of us don’t cry out for justice because most of us never experience injustice. So it’s natural for our sermons to massage our middle-class cravings for reassurance and comfort. A pulpit that once reverberated with prophetic calls for God’s justice to roll down had been reduced to comparatively pathetic calls to personal piety and individualized morality.

Even as our country has become increasingly and depressingly more polarized around political ideologies and hot-button single issues, my preaching team and I have been slowly and gently reintroducing the prophetic dimensions to our pulpit. With the twin goals of not politicizing our church and teaching everyone to think theologically first, what follows is a brief summary of our approach.

Our very conservative members sometimes must wonder at times if we’re secretly lacing our sermons with liberal agendas, while our very progressive members must think sometimes that we’re not being radical enough. All we can honestly say is that, as preachers, we are studying the Master’s “music” carefully, and then trying to “sing” our parts as faithfully and as clearly as we can amidst a cacophony of sometimes sour notes or unusual and discordant harmonies. Hopefully, over time, we’ll all be able to sing the Lord’s chorale of justice together.

The Institute for the Study of Asian American Christianity, of which Fuller alumnus Ken Fong is a cofounder, hosts “equipping symposia” annually on the Fuller Pasadena campus. The 2011 event, with the theme “Living Out the Gospel II: Asian American History—the Lost Coin,” reminded the participants that it is crucial not to forget ethnic roots and the important theological resources that they contain.

“This is a Pentecostal gathering in the best sense of the word,” Fuller President Richard J. Mouw stated at the symposium, observing how many participants have roots in different countries and regions, yet unite under a common Asian bond. “As several different languages come together to celebrate what God has done, this gathering is a sign itself of God’s renewing work in the world.”

All of this is grounded in at least two essential theological convictions: that God’s justice isn’t just focused on personal sin but on the effects of that sin in the world, and that in order to be more aware of God and what matters to God, we must be an uncomfortably diverse body of believers.

For far too long, American Evangelical churches in particular have made the gospel mainly about saving souls from going to hell. While recognizing the dual clarion call both to proclaim and demonstrate the Good News, our default has always been to save individuals and maybe get around to promoting God’s justice in the world. As one of the Bible expositors at the recent Third Lausanne Congress on World Evangelization in Cape Town reminded us, while it is terrible to suffer from thirst, hunger, or being trafficked, that is nothing compared to the torment of being in hell for eternity. Hard to argue with this logic, but I find myself disturbed by this recurring emphasis on what seems to be a very Western forced dialectic. Its prevalence means that those of us trying to preach prophetically today must challenge it by demonstrating that God’s call is both to evangelize the lost and to bring justice to the overlooked and oppressed.

If our churches are homogeneously conservative or liberal, we will fail to live out this dual call of proclamation and demonstration. While diversity makes everyone uncomfortable at some level, we ask our people that if we don’t learn to be comfortable with those who are very different than us now, how can we expect to be comfortable in heaven? This goes beyond political diversity. If there aren’t any poor people or those with special needs in our churches, for example, how can we ever expect to understand their needs or how we might be ignoring them? Our seeking to be comfortable is preventing us from being desperate to fill out the members of the body of Christ. Attempts to be more diverse that are motivated by today’s political correctness are doomed to fail. But efforts that are driven by a deepening desire to be a robust and fully functional church have more potential to push through the discomfort to the place of redemptive community.

It hasn’t been simple or painless to preach and live like this, but I know of no other way now. 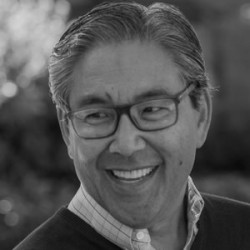 Ken Fong, senior pastor of Evergreen Baptist Church of Los Angeles in Rosemead, California, was appointed part-time executive director of the Asian American Initiative beginning September 2013 and assistant professor of Asian American church studies as of July 2014. He is widely respected as one of the pioneers and current innovators of Asian American ministries, and is author of “Insights for Growing Asian-American Ministries” and “Pursuing the Pearl: A Comprehensive Resource for Multi-Asian Ministry.”