“Even as we never allow either ourselves or others to approach the heart apart from a humble, loving acceptance of the mystery of the heart, so we must approach others with an equal sense of mystery and with equal humility and love. If this rule is cordially obeyed, vengeance and intolerance will yield to patience and understanding, for love takes in the sanctity of another life and wishes for it nothing but good.”

+ Edward Carnell, Fuller’s second president, in his 1955 inauguration address. Pictured above are ashes from the Ash Wednesday service at Fuller’s All-Seminary Chapel—a service that begins the 40–day period of Lent when Christians everywhere remember their frailty and humble themselves before God.

“What if we rewarded a demonstrated ability to think well: to detect our own informational blind spots, generate and evaluate various viewpoints, and recognize what sorts of conclusions one can and cannot safely draw from evidence? . . . Intellectual progress is made when we find the weaknesses and strengths in each others’ positions and think of ourselves as part of a greater collaboration towards the pursuit of truth and insight, where ideas are not regarded as our possessions or a means for self-promotion.”

“If I’m not relating to you in a way that threatens me, that makes me vulnerable, I can’t actually connect with you. Genuine involvement requires some degree of honest expression of the self. You’ve got to be there; you can’t pretend while you’re there and still really engage. You have to be present to the other person as a person yourself in order to see the other.”

+ Vasudevi Reddy (above), a Hindu scholar from University of Portsmouth, argued that humility is a necessary foundation for intellectual inquiry at the “Science of Intellectual Humility” conference—an event hosted by Fuller’s Thrive Center as part of a Templeton-funded research project. Watch more lectures here.

“Humility involves a recognition of a set of relationships—the relational character not just of our thinking but of our entire existence within a world of things and between that world and God. . . . The properly ordered self is characterized by gratitude but also by patience, by an awareness that there are many things that can contribute to my realization of myself that I cannot change, and I simply must await happening. Theologically, this properly ordered self recognizes that he or she is specifically contingent upon the person of Jesus Christ.”

+ Grant Macaskill, from the University of St. Andrews, lectured at the “Science of Intellectual Humility” conference on the gospels as a model for a distinctly Christian approach to intellectual humility. Watch his lecture here.

“Our humility is the fertile ground that draws the supernatural power of God to us. It is this power that we access when we preach, and it is revealed through our weakness. . . . When we humble ourselves as preachers we come to the end of our human power and ability to persuade others. It is at this humble intersection where God exchanges our weakness for his strength—our human power for supernatural power.”

+ After neglecting to mention a people group during her lecture at Urbana 2000, Brenda Salter McNeil [MDiv ’84] decided later to publicly apologize to the thousands in attendance. This humble act had a profound impact on all in attendance and caused Dr. McNeil to reflect years later on the power of weakness in preaching. Read her whole reflection here. 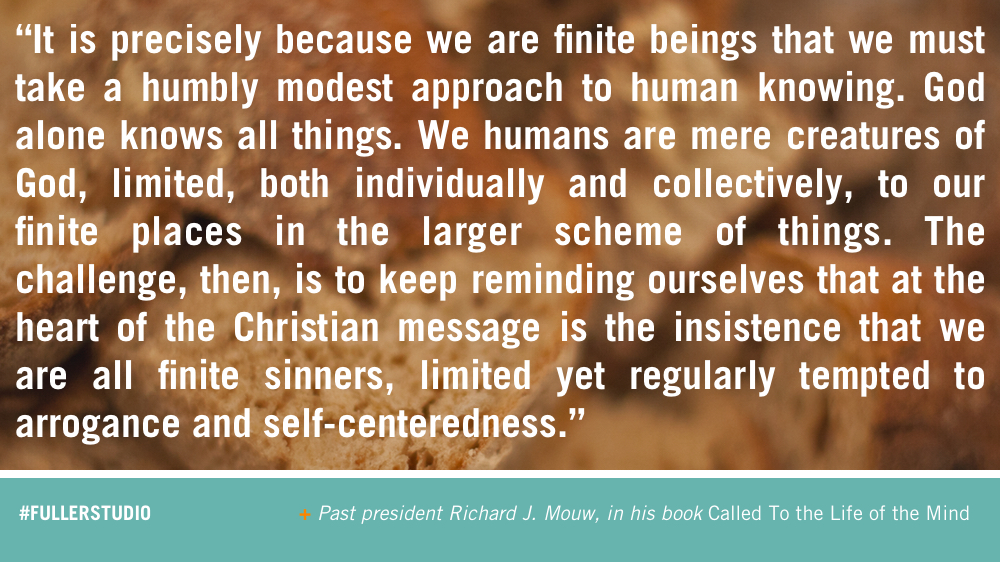 (“Humility is a language acquired step by step. It requires effort and consistent practice because, like any other language, it can be lost if it isn’t practiced. We often allow our hearts to be filled with things other than humility. A ministry seasoned with humility will always retain its good flavor. My daily challenge is to continue learning how to be humble and how to speak the language of humility, so that I may express my love for God and others.”)

+ Carlos Cevallos, student, reflecting on humility and the Integrated Studies course on vocation—also know as the Touchstone course. Read more from him and many other students on the Touchstone Blog.

“We need a balanced humility that affirms the worth and gifts that God has given us and also claims the weaknesses and sin that work to undermine our Christian life. We need a humility that allows us to set aside all we know, save our knowledge of Christ, so that in our weakness the poor may find strength (1 Cor 2:1–3). We must understand ourselves as stewards, stewards of the gifts God has given us, stewards of our relationship with the poor, stewards of the resources we bring to the community and that the community already has.”

+ Bryant Myers, professor of transformational development in the School of Intercultural Studies, in his book Walking with the Poor

“One of the greatest things a film does is put us in a place where we are almost forced into practicing attentiveness—and of course, attentiveness is linked to humility. If I sit and listen to someone else for two hours, and if I really listen, then I cannot help but be humbled. My sense of self is smashed. I am not the subject here, anymore; I am the receiver.”

“When you don’t cultivate what it means to be humble in the context of the sociological imagination, then your humility is only going to be humility that translates to people who come from your background. All of our understanding of humility and how that connects to leadership is contextual. If we’re coming from a higher place of power in society, our attempts to be humble can get lost in translation in some really interesting ways.”

+ Fuller Forum lecturer Christena Cleveland, critiquing racial blind spots to the idea of servant leadership, in a conversation with Tod Bolsinger, vice president for vocation and formation. Watch more from their conversation here.

“If other religions truly do have some relation with God, then we must be open to receiving what God might have wrought among them. Just as Israel was awaiting the coming of the Messiah, so too are we now awaiting Christ’s return. As we live in this penultimate time we must be humble in our claims to certainty. The postponement of certainty, our humility before the work of God in other religions, elevates
the legitimacy of the religious other so that we might also be their guests and receive their blessings.”

+ Alexander Massad, in an essay on the differences between hospitality and humility for Fuller’s Evangelical Interfaith Dialogue Journal. + (Below) Organized in the style of Jewish midrash, the image below gathers commentary on Philippians 2:3-11 (NRSV) from essays written in honor of Mark Labberton’s presidential inauguration. Read more interpretations of humility and the ”mind of Christ” here.

+ Pictured left is the “Yoke of Service,” a presidential stole given to Mark Labberton during his inauguration. Designed by Fuller alumna Olga Lah, the stole’s seven crosses in three flowing lines represent the Spirit moving over places and cultures, and the blue color signifies the living water that flows around the world via the Fuller community. Inside the stole is an inscription from John 13:34: “Love one another, as I have loved you.” When Dr. Labberton wears it this verse lies over his heart, reminding him that he is deeply loved and that God calls him to serve out of a love for others. Learn more about the presidential symbols of office here.