I never wanted to preach better in my life! I was invited to speak at Urbana 2000, the international missions conference sponsored by InterVarsity Christian Fellowship every three years at the University of Illinois in Champaign-Urbana. There were 20,000 delegates in attendance at this conference from all over the world, and it was a great honor to be asked to be one of the keynote speakers. I really wanted to preach well. In fact, if the truth were told, I wanted to knock the ball out the park!

So I prepared for this speaking event like I had never prepared before. I studied. I prayed and I fasted. I wrote the sermon months ahead of time. But, in spite of all my preparation, study and prayer, I still felt like something was missing. I didn’t feel “anointed.” So when my family and I went to our monthly Bible study group I asked the group to pray for me. They all gathered around me and prayed that God would use me and anoint me to speak powerfully at Urbana. Those were the prayers I expected them to pray. However, when my husband Derek laid his hands on me to pray he said, “Lord, Brenda represents the best of who we are. We give her to you and ask you to use her as your sacrificial lamb.” Right after that I remember thinking to myself, “Sacrificial lamb! I don’t want to be a sacrificial lamb! What kind of prayer is that?!” I promptly dismissed Derek’s prayer and decided to side with all the people who had prayed for me to be anointed and powerfully used by God.

Urbana is a convention sponsored by InterVarsity Christian Fellowship that seeks to inform college students about current issues around the world and motivate them to participate in missions. The first Urbana was in 1946 with over 500 participants; attendance in 2006 was over 22,500.

At Urbana I preached well, however it was not as dynamic as I had hoped. During my message I talked about Mr. Ricky Byrdsong, the former head basketball coach at Northwestern University in Evanston, Illinois, who was tragically shot and killed by a white supremacist, college student. While I spoke, I neglected to say the name of a young Korean graduate student who was also shot and killed in Indiana, by the same gunman, while he was standing in front of his Presbyterian church. I didn’t say his name because I was afraid of mispronouncing it in front of all those people—so I omitted it. Later, after I finished speaking, it was brought to my attention that some Asians students were upset with me because my omission made it seem like I valued and mourned the life of one man more than the other. That was never what I intended to do at Urbana! The next morning I sensed that God spoke to me and said that I was to be a “symbol of repentance.” Once again my first response was “I don’t want to be a symbol of repentance!” But when I spoke with my husband about it, we both knew that I had to apologize. It was only then that Derek’s prayer about being a “sacrificial lamb” made sense to me. After much internal debate and struggle, I asked the convention leaders for time to go back onstage and apologize. They agreed and gave me two minutes. As I spoke I was broken and humbled. I felt weak and vulnerable in front of thousands of people. As I ended my remarks I said, “I now understand what it feels like to be White—to try so hard to get it right but feel like you always get it wrong.” That was the first time that I honestly identified and empathized with White people. There was an immediate reaction throughout the assembly hall. The worship leader standing on stage began to cry. One woman told me that she watched the service on closed-circuit television in her hotel room and when she heard those words she gasped and began to weep.

Many would say that that apology was a turning point at Urbana. The positive responses I received were overwhelming. As I left the stage, Dr. Ken Fong hugged me and said he was proud of me. Since then we have become close colleagues in the ministry of reconciliation. International delegates from Korea bowed and greeted me with honor. Asian American, Native American, and Hispanic students welcomed and greeted me warmly when I visited their culture-specific meetings. I was invited to speak in Africa and other countries. God used that two-minute apology more powerfully than he used the entire message I preached at Urbana! I was indeed used as God’s “sacrificial lamb,” and in the process I learned about the power of weakness.

As a preacher, I learned that humility is one of the most important characteristics in the ministry of reconciliation. This is implied in the very nature of the word “humility,” which comes from the Latin word “humus” and means “fertile ground.” Our humility is the fertile ground that draws the supernatural power of God to us. It is this power that we access when we preach, and it is revealed through our weakness. The apostle Paul understood this when wrote these words in 2 Corinthians 12:7–10:

Therefore, in order to keep me from becoming conceited, I was given a thorn in my flesh, a messenger of Satan, to torment me. Three times I pleaded with the Lord to take it away from me. But he said to me, “My grace is sufficient for you, for my power is made perfect in weakness.” Therefore I will boast all the more gladly about my weaknesses, so that Christ’s power may rest on me. That is why, for Christ sake, I delight in weaknesses, in insults, in hardships, in persecutions, and in difficulties. For when I am weak, then I am strong.

When we are weak a “divine swap” takes place. When we humble ourselves as preachers we come to the end of our human power and ability to persuade others. It is at this humble intersection where God exchanges our weakness for his strength—our human power for supernatural power. Author and theologian Marva Dawn agrees and says in her excellent book entitled Powers, Weakness, and the Tabernacling of God that “God has more need of our weakness than our strength. Just as powers overstep their bounds and become gods, so our power becomes a rival to God. By our union with Christ in the power of the Spirit in our weaknesses, we display God’s glory” (p. 47).

This is hard for those of us who have been reared in the United States to believe because we are socialized to respect, admire, and seek power. Those who make the news or the front covers of our magazines are often people of power—military power, star power, financial power, technological power, intellectual (brain) power, or political power. As a result, as preachers we may feel like we must always be at a place of strength when we preach the gospel. This is not true—in fact, young people are seeking leaders who model honesty, authenticity, credibility, and integrity. They can see right through our pretense of strength as superficiality.

The way forward with this diverse generation is to find commonality by connecting honestly and humbly through our weaknesses and our pain—not through our strengths or our successes. This is not to say that we should divulge our personal struggles publically or use the pulpit as a place of personal confession. No, not at all! Instead, it is to recognize that people who come from different ethnic, cultural, generational, and socio-economic backgrounds resonate and identify with each other through the common ground of their pain. Suffering, struggles, disappointments, failure, and mistakes are all part of the human condition that we share across the barriers that divide us. This is the essence of the gospel message that we preach—that instead of sending a mighty king, who was strong and mighty to save us, God came in human form as a newborn baby in a manger, the Messiah and Savior of the world. This is the power of weakness!

As preachers may we have the wisdom of weakness to speak honestly out of our pain and wrestling with the complexities of life. As we do so, I pray that this generation will see us as credible witnesses of the gospel who preach with authenticity and humility. When we preach like this, I believe the power of God will come and the unifying Holy Spirit will break down walls and bring people together. This is the fertile ground necessary to receive the seeds of new visions, new possibilities, new strategies, and new ideas that we preach so fervently about. Although it was a painful lesson to learn publically at Urbana, I am now firmly convinced that humility is the key to everything God will do through us on earth. May God grant us the wisdom to know that the Kingdom that unites people from every tribe and every nation will be fully realized on earth and we get to declare and demonstrate its reality through the power of our weakness. 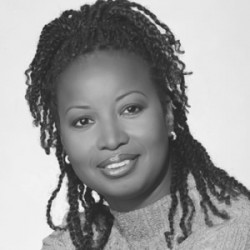 Brenda Salter-McNeil Salter McNeil is an associate professor of reconciliation studies in the School of Theology at Seattle Pacific University, where she also directs the Reconciliation Studies Minor program. A preacher, evangelist, and thought-leader with over twenty-five years of experience in racial and ethnic reconciliation, she is also president and founder of Salter McNeil & Associates, a Christian company that partners with organizations to produce interculturally competent leaders on college campuses, in churches, and in organizations around the world.