African Americans have long been valued and treasured in the evangelical faith, having  received from and contributed to the multiphased spectrum of evangelicalism in the United States. The gospel message still pervades and orders teachings promoted within the majority of Black church groups. A biblical frame of reference still informs and controls Black faith. Black evangelical churches still emphasize the importance of the biblically based faith that God has revealed himself in Jesus, that Jesus is Savior and Lord, and that his expected return will precede the final judgment of history by a just God. Almost since the beginning of the Black presence in this country, African Americans have responded to a biblically based gospel that they have tested and proved. They have shared spiritual experiences and passed on the evangelical heritage with concern, creativity, and gusto. The development of Black evangelical churches and denominations stands as historical proof.

Black evangelicals have been neither deficient in their theology nor delinquent in their witness. Firmly convinced that Scripture is the Word of God for all of life, and aware of implications of the scriptural statement that “from one ancestor [God] made all nations to inhabit the whole earth” (Acts 17:26 NRSV), they have long questioned and protested against the racist barriers that made separate Black congregations and denominations necessary. Black religious separatism was not initially something that evangelical African Americans desired. Historian Albert J. Raboteau, assessing the Black experience in American evangelicalism during and after slavery, commented: “The opportunity for Black religious separatism was due to the egalitarian character of evangelical Protestantism; its necessity was due, in part, to the racism of White Evangelicals.”1 Although separateness was forced upon African Americans, that separateness occasioned Black self-affirmation, independence, and pride as African Americans staked their claim in such distinctive groupings as “African Methodist” or “African Baptist,” and so forth. These distinctive groupings also became a meaningful social setting and a political base from which to face and engage the forces of a racist society.2

Historian Earle E. Cairns, in his 1973 book The Christian in Society, wrote that “Contemporary Evangelicals, who for a time ignored their responsibility as Christians in Society, are becoming increasingly aware that . . . they have a responsibility to put the principles of Christ into action . . . in the social order in which they live.”3 Although Cairns did not dwell at length on what had stimulated that awareness, we must remember that he wrote after the Civil Rights movement had prodded major changes on the social scene in America during the decades of the 1950s and 1960s. To be sure, some change in evangelical social views were stimulated by Carl F. H. Henry’s articles in Christianity Today magazine and in his strategic book Aspects of Christian Social Ethics; Sherwood Wirt also called attention to several clear issues needing evangelical response in his book The Social Conscience of the Evangelical.4 But it should not be overlooked that both Henry and Wirt, among others, wrote after much sensitizing about the flawed social scene in this nation had been initiated by socially active African American leaders. The “increasing awareness” among evangelicals about being more socially responsible as Christians was stimulated either directly or indirectly by the clear ethical demands that victimized Blacks had been calling attention to across the nation.

Efforts to prod evangelicals to become more active in dealing with social and racial issues have had to be insistent because of an apparent blindness on the part of many evangelicals regarding inequities in the social order in America. Regarding efforts to increase social awareness where race is concerned, I am reminded of a happening during a world convention of evangelical leaders during the late 1960s. While attending the World Congress on Evangelism held in Berlin, Germany, in November 1966, those of us who were delegates heard many position papers that treated aspects of the Congress theme: “One Race, One Gospel, One Task.” Interestingly, and problematically, as we listened across ten days, we African American delegates discovered that no attention had been devoted in any position paper to the first part of the Congress theme, “One Race,” nor had any official paper about race been distributed for private reading. The Congress delegates had been drawn together from across the world, literally, and the vast assemblage—representing the largest ecumenical and evangelical gathering of the church since Pentecost, A.D. 33—reflected great diversity of backgrounds, nationalities, geographical locations, and color distinctions, and yet no major statement about the oneness of the human race had been voiced or written.

We African American delegates discussed this among ourselves and were granted an audience with Carl F. H. Henry, the Congress chairman, to question the evident omission. (Interestingly, it later came to our attention that some delegates from Africa, India, and South America had noticed the omission also.) While talking with Dr. Henry about the omission, he apologized on behalf of the planning committee; he stated that the “One Race” aspect of the Congress theme had been taken for granted, and therefore no one was assigned to treat it. Henry then asked if we would be willing to work at developing a summary statement about “One Race” that could be included in the final report to be distributed to the world press as an outcome of the Congress. A number of us agreed to do so: Robert “Bob” Harrison, Howard O. Jones, Ralph Bell, Jimmy McDonald, Louis Johnson, and James Earl Massey.5 We worked late into the night but managed to develop a clearly focused statement about race. We wrote forthrightly about human equality as a biblical principle based on the oneness of the human family under God as Creator. We stressed the importance of agape-love in our dealings with all humans and the need to reject racial and national barriers that forbid full fellowship and cooperative ministry. Our statement did not offer any distinct strategies for dealing with racism, but our concern at that point was not to prod decision about strategy. Our concern was rather to give a basic statement that declared our biblical understanding of human oneness, with racism understood as a social evil, an unjust pattern in society, and a barrier to cooperative evangelism. As it turned out, what we prepared was viewed as the strongest statement evangelicals had ever made on the subject of race until that time.6

“The most important issue we face today is the same the church has faced in every century: Will we reach our world for Christ? In other words, will we give priority to Christ’s command to go into all the world and preach the gospel? Or will we turn increasingly inward, caught up in our own internal affairs or controversies, or simply becoming more and more comfortable with the status quo? Will we become inner-directed or outer-directed? The central issues of our time aren’t economic or political or social, important as these are. The central issues of our time are moral and spiritual in nature, and our calling is to declare Christ’s forgiveness and hope and transforming power to a world that does not know him or follow him. May we never forget this.”

+  from Billy Graham in an interview with Christianity Today. Graham [1918–] is an American evangelist and spiritual advisor to several presidents, known for his revival rallies. Committed to integration in his crusades, he invited Martin Luther King Jr. to preach with him and bailed King out of jail when he was arrested in demonstrations. A member of Fuller’s board from 1958 to 1965, Graham helped provide guidance to the seminary during a formative season. He has remained a strong ally since.

1. Howard O. Jones (1921–2010) was an associate evangelist with the Billy Graham Evangelistic Association for 35 years and was Graham’s first African American colleague. To understand the responsible level at which Jones helped American evangelicalism, one need only read his book White Questions to a Black Christian and Edward Gilbreath’s biography of Jones, Gospel Trailblazer. The questions Jones treated in his book were those put to him on “the race question” during many evangelistic crusades, at Bible conferences, during missionary conventions, engagements at colleges and seminaries, and questions sent to him in response to his longtime and award-winning radio ministry.7

2. Tom Skinner (1942–1994) was a national evangelist whose book Black and Free chronicled his movement from a street gang leader in Harlem to a converted spokesman for Jesus across the nation and into other parts of the world.8 His keynote address at Urbana 1970, InterVarsity’s missions conference in Champaign-­Urbana, Illinois, is still heralded as one of the most influential statements to young evangelicals, both White and Black, about renewal, mobilization, and effectiveness as evangelical witnesses in the world.9

3. William H. Bentley, a Chicago-based minister-theologian (and Fuller Seminary graduate), gave steady and strategic leadership to the National Black Evangelical Association (NBEA, founded in Los Angeles, California, in 1963) and actively promoted a distinctly biblical, theological, and social framework of study within which the Black perspective could be adequately reflected. During Bentley’s presidency of the NBEA, a prominent concern was to understand and explain Blackness as a God-given distinctive out of which African Americans can serve with a proper self-understanding and relate with dignity to all others. His thematic approach as a leader was based on two nonnegotiable ends: “Fellowship and Ministry—these are the poles around which the Association revolves.”10 Bentley’s theological leadership among Black evangelicals has been recognized within the wider spectrum of American evangelicalism; he wrote the chapter on “Black Believers in the Black Community” for the book The Evangelicals, which David F. Wells and John D. Woodbridge edited.11 That chapter explained Black evangelicalism as a very distinct phenomenon originally rooted in the theology and cultus of the Bible school movement, which had educated most of the more prominent African American evangelicals. The chapter explained why Blacks had forthrightly acted in the social arena, and why they found it necessary to redefine the issues for which White definitions and approaches were inadequate—the development of a Black theology being a case in point—and the active involvement of Black evangelical pastor-scholars in shaping Black caucuses to help effect change in denominational systems where African Americans have been in the minority position.

4. John Perkins’s Voice of Calvary Ministries in Mississippi and his insightful books Let Justice Roll Down and With Justice for All marked him as a master planner for racial betterment and church witness.12

5. William E. Pannell has been an evangelist-interpreter-activist and seminary professor within American evangelicalism. In his provocative book My Friend, the Enemy, Pannell vividly set forth his personal story of how the Civil Rights movement helped him to understand how the inadequate anthropology of the White church group culture in which he was reared had obscured the value and meaning of his Black heritage.13 Educated for ministry in the Bible college movement, Pannell evangelized widely and effectively, then partnered with Tom Skinner Ministries. Following his service years with InterVarsity Christian Fellowship, Pannell became professor of evangelism and director of Black church studies at Fuller Theological Seminary, and later professor of preaching and dean of the chapel before his retirement.

In the mid-1970s, evangelical Christianity was growing faster in America than any other “brand” or religious movement (numbering more than 40 million by 1977).14 Despite that growth, however, evangelicalism was not influencing the social level of American life to any measurable extent. The need to do so remains, and African Americans remain poised to assist in increasing that influence. 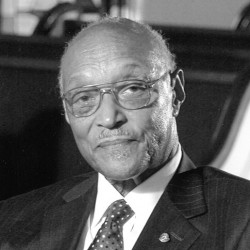 Over his lifetime of ministry, James Earl Massey has served numerous roles, including pastor, theological educator, scholar, and musician.