There’s a too-narrow hallway outside our magazine editorial office that’s just long enough to hang all 84 pages of a magazine-in-process. Professor Emeritus Bill Pannell passed through recently, and his eye was caught by a subject he’s championed all his life: evangelicalism. Reading a few lines from a writer whose views depart from his own, he said eagerly, “Mercy, I’ll look forward to reading this! See what we’re made of!”

The “we” to whom Bill refers is an eclectic community of people: in defining our magazine’s audience, we estimated a whopping 54,000 people directly connected to Fuller as alumni, trustees, staff, faculty, administrators, donors, and friends living in 130 countries. An audience of that size means more individual stories than we can include, so in developing magazine content we earnestly consider what we call “the grids” of gender, ethnicity, location, nation, school, age, function, calling, and perspective that define diversity among us. We think about the student sending a magazine to a supportive family member, our president leaving it with a potential scholarship donor, a trustee giving it to a seatmate on the plane, or a faculty member handing it to a prospective student. Inevitably there will be some who feel their perspectives are not fully expressed, and in this we must rely on the Spirit to unite us through the transcendence of story. Still, we hope each will be proud to say, “this is my Fuller community.”

Through the print and online version of FULLER, people all over the world can read the same stories and consider the same theological conversations. It is our hope that this will strengthen the connections within our global neighborhood as we continue to learn, teach, and mature in faith together.

In this issue you will find we’ve added something new, an amber plus sign (+) indicating there’s more to the story we’d like to share. It might be expanded material online (+ see videos of Tommy Givens on living with death or Gilbert Lugo and his amazing Bic pen drawings), a tidbit we couldn’t resist cramming in (+ did you know that Martin Luther King Jr. was bailed out of jail by Billy Graham after civil rights marches?), or a chance to credit artists whose work is a vital form of Fuller’s self-expression (+ President Labberton was a champion for including art in the new magazine).

There’s also more to the story of being evangelical, which is why we chose to focus on it in the theology section of this, our second issue. “Evangelical” has been defined beyond recognition by some outside the community of Fuller, and though there are many interpretations of the word even  among us, engaging that conversation for  ourselves is critical. Because there’s always more to the story. (+ Always.) 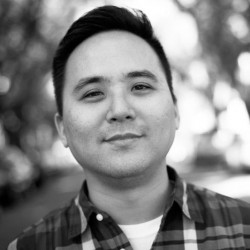