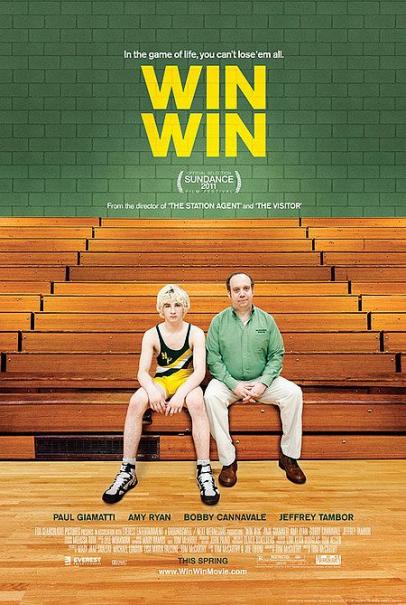 There is a lot to like in Win Win, most notably the main character, Mike Flaherty, played by Paul Giamatti. Mike has a lot of good inclinations and qualities. He loves and cares for his wife and kids, he helps elderly people with their legal problems instead of practicing more lucrative forms of law, and he even takes in a wayward high school boy who has no place else to go. He is a civic-minded, church attending, stand-up guy.

I found myself wanting Mike to be the man he seemed to want to be, and especially when he didn’t act like the man he seemed to want to be. Therein lies the tension of Win Win‘s story.
Via a slight indiscretion, Mike finds himself caught up in the inner workings of an estranged family. This circumstance threatens ultimately to destroy his life if he is unable to rectify what he did wrong, if he is unwilling to humble himself and truly be the man he seems to be.
Win Win is a tale of tested character. Woven throughout are a whole host of other wonderful themes as well – hospitality, forgiveness, care for the elderly, unselfishness, second chances, renewed hope, justice, family, and the kind of faith that is lived more than talked about. Win Win is a story about a good man on the precipice of being less than that and the people who help him keep from falling.

Now, Win Win is also the kind of movie that tells way more than it shows. Throughout this film, characters say exactly what they are feeling, the dialog explicitly reminds the audience ad nauseum what is at stake at each moment in the film. As an audience member, I was greatly annoyed by this. Everything is very “on the nose,” and I found myself wanting to shout at the screen, “Ok! I get it! This is very important because of…” whatever. The characters shouldn’t have to tell me how they feel and why they are doing what they do.

And truthfully, they don’t have to tell me. The plot and action is compelling enough and well enough constructed that I understood what was going on in the plot and in the characters. Tellingly, the most interesting and compelling character in the film is also the most mute – the boy that Mike welcomes into his home. Like a typical teenager, the boy spends most of the film mumbling one syllable answers to most questions and brooding through his scenes, but the action of the story is strong enough, I knew exactly what was going on inside him and why. If the rest of the characters communicated with the same reticence I would have nothing negative at all to say about this film.
Because in the end, I enjoyed Win Win quite a bit. The few days that have passed since I saw it have allowed me time to separate the annoying dialog from the compelling plot. It’s a fine story with good characters and a beautiful view of the world both as it is and as it should be.