I have decided to initiate a new way of rating movies in honor of 2012.  Some reviewers use stars, others use thumbs, still others use popcorn buckets.  2012 is a movie worthy of a new system entirely, and so I am awarding 2012 three flying limousines and a sad giraffe.

2012 is ridiculous in an awesome kind of way, but what else can you expect from a disaster movie literally about the end of the world?  The selling point here is the spectacle, so if you’re thinking of watching this for the biting social commentary or the nuanced character development, you’re going to be sorely disappointed.  If you go into this expecting the ridiculous, you’ll love it.

The cast is great.  John Cusack, Chiwetel Ejiofer, Amanda Peet, Danny Glover, Oliver Platt, Thandie Newton, and Woody Harrelson (at his crazy guy best) each participate in the earth’s demise in various ways.  These actors all have a way of being likeable in almost every movie they make, and had they not been at the center of this movie, I fear it would have digressed from laughable but likeable to just plain painful.

The special effects are great if you don’t mind Pacific Ocean sized tidal waves of CGI.  Because I knew what I was in for, I enjoyed it, though I typically prefer a more elegant mix of both traditional and computer generated special effects.  Still, I can’t deny the thrill of watching Las Vegas crumble into the bowels of the earth or Yellowstone erupt in a massive fireball that makes Hiroshima look like a firecracker.

The conceit of the film is that the ancient Mayan civilization ages ago predicted the world would end on December 12, 2012.  In the film, scientists learn of odd solar activity that’s heating up the earth’s core and causing the earth tectonic plates to violently shift threatening to destroy all life as we know it.  The “science” part is pure myth, but the reference to the Mayan calendar is not a fabrication.  One form of the Mayan calendar does actually end in 2012, and for some, this means that the world will end as well. 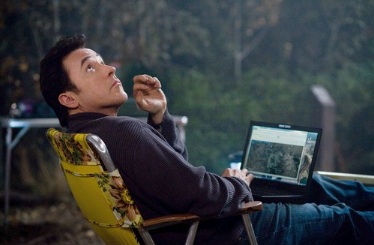 Apocalyptic fears are certainly not anything new.  It seems every few years I hear about a new date that will be the end of life as we know it.  These predictions come from all spheres too, including Christian ones.  So far, we’re all still here as far as I can tell.

When I was in high school, there was a period of time when I dutifully listened every day to a radio broadcast on my local Christian radio station featuring a man who daily delved into the front page and the Bible and drew correlations between what he read.  I felt sure that the end was certainly nigh, and the more I listened, the more I began to see the signs as well.  One night, I even awoke with a start at the sound of a distant train whistle thinking I had somehow missed the rapture and was left behind.

I soon realized that turning my attention to such fateful predictions was doing nothing but making me fearful.  Also, I read so many different theories about the end of the world that I came to the conclusion that no one really knew what they were talking about.  I was confused and afraid, and then I read what Paul wrote to the church in Thessalonica, a congregation similarly distressed about the end of the world:

“Now concerning the times and the seasons, brothers and you do not need to have anything written to you. For you yourselves know very well that the day of the Lord will come like a thief in the night. When they say, ‘There is peace and security’, then sudden destruction will come upon them, as labour pains come upon a pregnant woman, and there will be no escape!

“But you, beloved, are not in darkness, for that day to surprise you like a thief; for you are all children of light and children of the day; we are not of the night or of darkness. So then, let us not fall asleep as others do, but let us keep awake and be sober; for those who sleep sleep at night, and those who are drunk get drunk at night. But since we belong to the day, let us be sober, and put on the breastplate of faith and love, and for a helmet the hope of salvation.”

“For God has destined us not for wrath but for obtaining salvation through our Lord Jesus Christ, who died for us, so that whether we are awake or asleep we may live with him. Therefore encourage one another and build up each other, as indeed you are doing.” (1 Thessalonians 5:1-11)

Will the end come?  Yes.  Praise God that one day all will be made right.  Do we need to worry about it?  No, because we will be saved through Jesus Christ.  In the meantime, we should live lives of love out of faith in the hope of our sure salvation.

Whether we live or die, whether the end comes in 2012 or 20112, whether we’re forced to jump limousines over cracks in the interstate or not, we will be with Christ.

Let the giraffes be glad!