Psychotherapists have often treated client morality and spirituality as off-limits in the therapy room.1 In some cases, the omission functions as a professional blind spot. Froma Walsh, for example, recounts how she worked with a family to grieve the unexpected accidental death of the father, a pastor who had been much loved by his family and congregation. She subsequently lectured on and wrote about the case as a successful family treatment. During one of her presentations, however, a ministry student asked: “What happened to their spirituality after the father’s death?” Walsh found herself at a loss for words. She writes:

I couldn’t believe that I had not considered the spiritual dimension of family loss, especially in a case in which the father had been a Christian minister and the family’s life had been centered on their church community. In many presentations of the case, no clinical colleague or student had ever raised the subject. It was as if all consciousness of spirituality had been erased by our clinical training.2

I recall a parallel experience in a counseling class during my seminary training. The professor asked students to consider a case in which a Christian, plagued by the habit of exposing himself in public, sought the help of a Christian counselor. The case was assigned to small groups to discuss possible treatment strategies, and the typical response was some form of behavioral modification. The stated assumption was that this was a Christian seeking help from another Christian; yet no one addressed the moral and spiritual aspects of the case. Agitated, I made this observation from the back of the classroom. An awkward silence followed.

Surely, if seminary students, while training as therapists, fail to recognize such spiritual dimensions, then Walsh may be forgiven her oversight! Recently, however, there appears to be growing interest in client spirituality. For family therapists, this interest coincides with the rise of more respectful and collaborative models of practice in contradistinction to earlier, more paternalistic models of therapist power.

This is also the context for the development of narrative approaches to psychotherapy, most notably the work of Michael White and David Epston.3 In this approach, families are assumed to be trapped less by “problems” than by habits of perception and behavior sustained by stories repeatedly told about those problems. Thus, the therapist’s task is to help rewrite the family story. The problem is “externalized” by assigning it the role of antagonist in the family drama, making it possible to notice choices family members have made not to succumb to the problem. Such choices are attended to in detail, so that similar choices can be envisioned, practiced, and woven into an evolving story of competence. Finally, recognizing the need for newly rewritten stories to be reinforced, the therapist recruits others to function as appreciative audiences.

This skeletal outline cannot do justice to the creative complexity of White and Epston’s theory and work, and it should be noted that they eschewed the idea of their approach becoming a “school” of therapy when there are other narratively informed approaches.4 Some therapists use stories as a means of accessing client affect. In-depth discussions of clients’ favorite works of fiction, for example, can provide a safer field for exploring present emotions and imagining future possibilities.5 Typically, however, narrative approaches to counseling share an anthropological assumption: the coherence of human experience in general, and self-understanding in particular, is that of a well-ordered story. To this is added a therapeutic assumption: many presenting problems are, at root, problems of meaning, and therefore amenable to some form of narrative intervention.

Meaning is central to understanding spirituality. One article defines spirituality as “referring to the human experience of discovering meaning, which may or may not include the concept of a personal God.”6 Even absent an articulated god-concept, spirituality has a transcendent dimension, urged by the need to “have a relationship with something outside of and larger than ourselves. . . . What we believe about why things happen, and why they happen in the larger scheme of things is the essence of our spirituality.”7

But to which “larger scheme of things” does one turn to find spiritual meaning? Therapists writing on spirituality are quick to distinguish it from institutional religion, reflecting the individualism of American modernity. Spirituality, freed from the restrictions of religious tradition, can be little more than an individual hodgepodge of personalized ritual and belief.8 Americans may not have given up on corporate religion, but the tenor in the “spiritual marketplace” is toward eclecticism and away from commitment to any one faith.9

In narrative terms, the question is one of the viability of metanarratives, the grand stories of which each life story is a part. Do such stories possess the power to inspire moral passions, to give spiritual direction to life? Sociologist Douglas Porpora interviewed people of a variety of religious orientations and discovered a profound spiritual disconnection even among the seemingly faithful. He confirms what we intuitively know—one may “believe” something without being spiritually moved by that belief:

This metanarrative disconnection is encouraged by certain academic expressions of the postmodern temper. Narrative therapists tend to advocate a postmodernism that, following Nietzschean ideas, rejects metanarratives as a linguistic form of the will-to-power of a dominant group.11 Clients are seen as suffering the imposition of oppressive, life-restricting stories from without, handed down by family or culture. Meta-narratives are to be replaced with alternative meanings that better reflect client preferences.

This tenet of narrative therapy’s postmodern commitment is untenable and inconsistent.12 Are there no inherited metanarratives that provide positive resources for meaning? (Or do people with such resources simply not need therapy?) From a spiritual standpoint, a client may not need liberation from oppressive metanarratives; rather, spiritual well-being is better served by helping them submit wholeheartedly to metanarratives they know/believe to be true.

The good news is that adopting a narrative perspective need not depend upon the rejection of metanarratives—news of particular importance to pastoral counselors who have discovered narrative therapy. Burrell Dinkins, for example, adopts many of White and Epston’s ideas in his practice of “narrative pastoral counseling.” To Dinkins, this is a natural extension of the “pastor’s expertise [in communicating] with people through telling and listening to stories.”13 My concern is that throughout the book, the respectful, nonhierarchical narrative therapist brackets out the pastor as theological guide. Pastors might employ questions to develop their counselees’ more hopeful stories, but when should a biblical metanarrative form the framework for such questions?

For the pastoral counselor, I would suggest the need to counterbalance narrative therapy with the conceptual resources of narrative theology. I first encountered narrative theology in the writings of Stanley Hauerwas, who asserted that, “The question of the moral significance of scripture . . . turns out to be a question about what kind of community the church must be to be able to make the narratives of scripture central for its life.”14 Here, spirituality is corporate rather than individual, and depends upon the right ordering of life according to the biblical metanarrative. The church is a community of mutual moral formation that demonstrates the truth of its metanarrative in its life together.15

I would suggest that the tasks of both pastoral counseling and preaching share a common goal: to help the people of God imagine or reimagine their lives in terms of the present reality of God’s reign and its future consummation.16 The goal, in other words, is to stimulate the imagination in such a way that one begins to locate one’s story in the larger metanarrative context of the history of God’s interaction with the human race. As Dallas Willard has suggested, disciplined spirituality begins with vision.17

Addressing Christians who suffer persecution, the Apostle Peter in his first epistle neither commiserates nor counsels them to “cheer up.” Rather, he begins with their sense of being aliens in a hostile world (1:1), elaborates on this vision to give meaning to their experience (2:11), and reconstructs their suffering in terms of mission and calling. Their story does not begin and end with conversion and persecution, but reaches backward into the eternal purposes of election (1:1; 2:9), and forward into the certainty of the inheritance God has for them in heaven (1:4). He draws on the Psalms and Isaiah to reinforce the larger vision: be holy, for you are God’s chosen people, and he will vindicate the righteous (2:6; 3:10–12). Here, Peter addresses matters of meaning raised by persecution by immersing the church anew in the metanarrative context of God’s reign.18

This is not to say that a fully articulated story of the kingdom is to be found in the text of the letter. Several scholars have recently adopted narrative approaches to the interpretation of Paul, while others debate whether narrative structures are actually present in the epistles or are being read into them.19 But a less controversial thesis is that the Damascus road experience changed Paul’s self-understanding, transforming how he evaluated his past, present, and future (e.g., Phil 3:4–11). I suggest the same here: Peter is striving, whether by conscious artifice or not, to promote a self-understanding among the persecuted Christians to whom he writes—a self-understanding that by virtue of human nature has an intrinsically narrative structure.

Many of us were once captivated by inexpressible wonder at the gospel message. Could this story be true? To reimagine one’s own story as part of the long train of witnesses to the grace of God as portrayed in Scripture is a remarkable vision, difficult as it may be to maintain. Our spiritual struggle is that we cannot always clearly understand nor articulate how God’s story is playing out in ours. But that is the sustaining purpose of eschatological hope. Thus, may the motto for narrative forms of pastoral counseling be expressed in that wonderful lyric of old:

And when in scenes of glory
I sing the new, new song
’Twill be the old, old story
That I have loved so long. 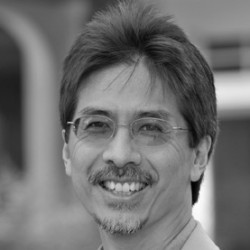 Cameron Lee is a professor of marriage and family studies in Fuller’s School of Psychology, and also a Certified Family Life Educator and a licensed Family Wellness Trainer.