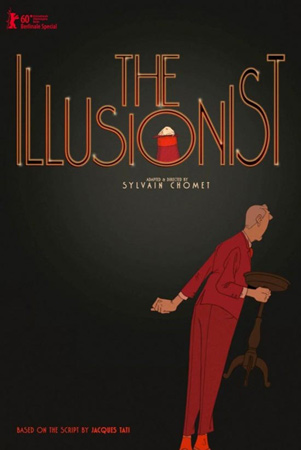 It is story of a man who awakens a belief in magic in a young girl who had no reason to believe in anything other than hunger and cold. She sticks herself to him like a song sticks in your head, and he spends himself to preserve her newly awakened sense of wonder.

The Illusionist is first of all a gorgeous film. The hand drawn animation is bright, nuanced, and graceful. There is something so charming about hand drawn animation that the best Pixar has to offer still can’t quite touch. Hand animated films, more than any other filmic medium, best capture the power and possibility of film.

In unskilled animator’s hands, this power becomes a detriment. Poorly done cartoons glare with inconsistencies. In a master’s hands though, like those of Sylvain Chomet, this degree of control yields dazzling cinematic, visual, and narrative results.

Pay attention to the visual experience of The Illusionist. You aren’t really given much choice actually. Dialog is sparse, and when it is present, it is mostly muffled and unintelligible. The point is what you see, so pay attention.

This is a tale of disillusionment, and the heartache you will likely feel as the film nears its end is profound. But don’t be tricked. There is a slight of hand at work here. Pay attention. Notice the small details as everything is going dark and being sold and flying away.

Ultimately, this is a story about hope, hope in the face of hopelessness. In The Illusionist, we are encouraged to dispense with false hopes and look beyond ourselves and our easily observable world to something… else.

The encouragement to look beyond is important. I’m convinced that as people look beyond they will see the One who was beyond who came to us and is beyond no more. If we’re really looking for hope, we’ll find it, and the only true hope is Christ.