In the 1960s, and for hundreds of years prior, blacks and whites did not often share restrooms, public or otherwise. In the 1960s, Jackson, Mississippi, was indeed a stirred up fire ant bed of segregated unrest as it should have been, because Jackson was in the heart of the most deeply segregated area of the United States. Medgar Evers was indeed killed. JFK was shot. The historical accuracy of The Help ends there.

But that does not make it any less of a movie than it would be were it all true.

The Help is the story of a group of Jackson, Mississippi, housekeepers and their attempts to gain equality in the early 1960s. They are helped in their cause by a young woman named Skeeter eager to write a book about “what disturbs” her that no one else is writing about. She is chiefly disturbed by the way these black women are treated by the very people whom they take care of and whom they have taken care of for generations, so she compiles these domestic workers’ stories and publishes them in an anonymously authored book. “The Help” is the name of the book they write, but the film The Help is told from the perspective of one of the housekeepers, Aibileen. The film is her story. 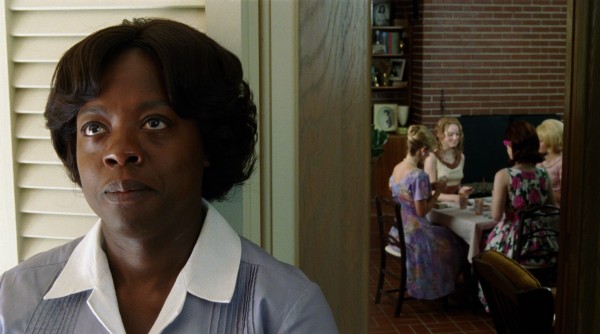 The Help is as funny and sanitary a movie as I have seen this summer, especially considering its serious and messy subject matter. For all of its two hour and twenty-six minute run time, I was engaged, amused, and touched. The messages and themes are at times a bit explicit, but they are conveyed with such conviction and skill, such genuineness by the performers, the explicitness is easily overlooked. If ever a movie in recent times called for a Best Ensemble Academy Award category, The Help is it. Every woman in this almost entirely female cast is superb.

The Civil Rights Movement of the 1960s serves as the back-drop for The Help, but I did not walk out of the theater with a renewed commitment to racial equality. I left deeply appreciative of women and deeply disturbed by how women are affected by our materialistic culture. To reiterate, The Help, I contend, is not about racism, and it’s not about sexism either. I saw in The Help a depiction of the destructive power of materialism. 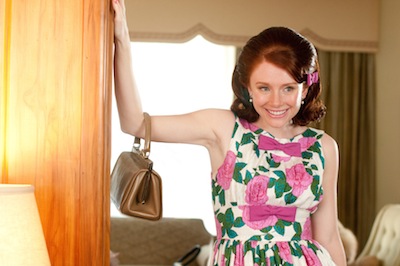 The Help‘s villain is Hilly Holbrook, a racist, vindictive woman portrayed with vicious glee by Bryce Dallas Howard. Hilly reigns supreme at the top of Jackson society’s social pyramid. She is the one lobbying for mandatory separate restrooms for blacks and whites. She is the one who excludes other white women who she feels don’t belong in proper society. She is the one whose comeuppance symbolizes victory for the maltreated and misused. The audience is supposed to hate Hilly and all for which she stands.

For the first hour and forty-five minutes of the film, I hated her with passion, and then I realized the sadness and desperation of her own life. Hilly does not sit enthroned atop a gleaming pyramid. She reigns over a dung heap. This is a truth not lost to the movie itself as Hilly’s final confrontation with the film’s central character, the housekeeper Aibileen, makes clear.

Hilly is so desperate to keep everyone else down because all she has is her little self-created kingdom of social standing and wealth. Everything she does is an attempt to shore up the walls of this kingdom. She organizes “coat drives” to remind herself that she is not poor. Her women’s committee lies to itself about making “a big dent” in African hunger. Her crusade against the housekeepers is born out of guilt that she is incapable of keeping her house on her own. She must denigrate the black women around her because they are ever present reminders of her own inadequacy and the weakness of her way of life.

Appearances are everything to Hilly and her covey of similarly self-interested wealthy, white women, because appearances are all they really have. The shocking revelation contained in the housekeepers’ book isn’t that racism runs rampant in Jackson society. It’s that Jackson society is a sham.

Even the men in The Help‘s world are victims of this culture. Where are the men in this story? They are conspicuously absent. The white men are always working, taken from their loved ones by the need to provide the lavish lifestyle they all “enjoy.” The black men are absent as well, and the ones who are talked about are mentioned in the context of abuse, having had no other outlet for their anger than to lash out against the only people they have power over – their wives and children. The black women are indeed at the bottom of this materialistic pyramid of power. Being at the bottom, they form the foundation for the unjust system. When they rebel, everything above begins to crumble. 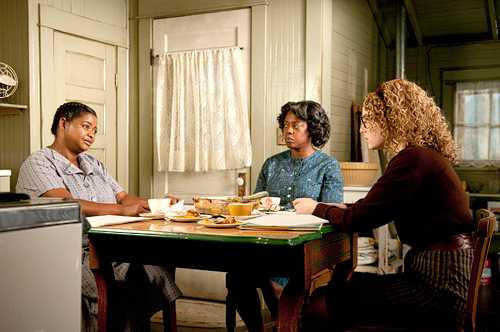 The Help doesn’t resolve. Aibileen and one of the other housekeepers do begin to find some freedom, but there is clearly a long road ahead for everyone involved in the story. This is presented visually in the film’s closing shot.

The scenes I found most poignant though were a scene in which Aibileen’s friend and co-conspirator Minnie is presented with a feast by her employers and an immediately following scene in which Aibileen’s church community applauds her and the risk she has taken to tell her story. I was struck then with the conviction that all women deserve a feast, and all women deserve applause for what they have done both to sustain us and to set us free.

The Help isn’t a “true” story in that the events it portrays did not happen in history, but it is true in that it tells us the truth about the world we live in now. The Civil Rights Movement of the 1960s essentially ended institutionalized racism in the United States, but Materialism still rears its ugly head. As in the ’60s, our world will begin to change for the better when the oppressed begin to shake off the yoke of their oppressors, forcing the oppressors to take note of the yokes placed upon them by the system itself. I pray God gives us more truth-tellers like Aibileen to help begin to set us free.