Super 8 is all of my favorite movies from my childhood. It is The Goonies, E.T., Jurassic Park, The Sandlot, Godzilla, Jaws, and a splash of Raiders of the Lost Ark for good measure. The film, written and directed by J.J. Abrams, is nothing short of an homage to the film’s producer, Steven Spielberg. Granted, there are enough Abrams-esque touches to make the film uniquely his own, but Spielberg’s legacy is all over this fun summer blockbuster.

The plot involves a group of young people making a short film with their Super 8 camera in the summer of 1979.  One of the boys, our protagonist Joe Lamb, is quietly mourning the death of a parent some four months earlier. While filming at an old train depot late one night, a passing train crashes all around them, the military soon arrives, and the friends find themselves with footage of an alien they aren’t supposed to know exists.

It would be easy to criticize this movie as being derivative, boring in its similarities to earlier, better work by either Abrams or Spielberg and an ultimately lazy work of manipulative sentimentality masking deep cynicism and greed. One could hate this film and in the same breath laud its antecedents. Admittedly, for almost all of its two hour running time, Super 8 feels like a movie you’ve seen before, but it feels like a movie you’ve seen before that you really liked, and, because it does manage to be surprising chiefly in its emotional plot twists, it feels like a movie that you can’t remember very well and want to see again.

Why hate Super 8 when one might just as easily love it? Super 8 is not undergirded by cynicism and greed. It is built on a foundation of love of cinema, mystery, and fantastic storytelling. Super 8 has spectacle, sentiment, and awe, but it also respects its audience. A preview for the latest iteration of the Transformers franchise preceded my screening of Super 8, and I was reminded of cinema that appeals to humanity’s base instincts for impact instead of appealing to its more noble qualities. 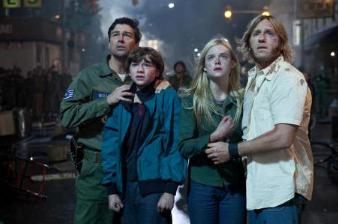 Super 8 bets its narrative impact on its audience’s ability to empathize with its characters. The train wreck matters because we don’t want anything to happen to our heroes not just because it looks cool. The story’s penultimate moment isn’t a visual gluttony of gunfire and CGI but the reconciliation of a family and a young boy’s learning how to grieve. And this moment is beautiful and surprising and worth every second of the 120 minute ride to get there. The moment matters because we care.

The importance of empathy – the ability to see through another’s eyes, to hurt with another’s heart – is at the very center of this film. Jeremy Rifkin, in a well known animatic from Britain’s Royal Society of Arts, states that we empathize because we recognize the fragility of life in another person. Super 8, in the midst of explosions and tank treads, focuses in on the heartache shared by every creature in the known universe, and encourages us to see each other instead of being preoccupied by ourselves.

Maybe we have seen it all before, but we have not seen it enough.