Years ago, as I was only embarking upon my peacemaking journey, I sat with a mentor on a porch overlooking the Rocky Mountains. We were in an hours-long conversation about shalom. Playing devil’s advocate, he pushed on my every thought about peace: what it required, what it looked like, whether it was the same as justice or something far more.

The conversation, equal parts exhilarating and discouraging, zeroed in on the point with one question: “What do you mean when you speak of peace?”

I didn’t know what to say.

Recognizing that his young mentee was in a necessary moment of disequilibrium, my mentor smiled, sat back, gestured toward the meadows and aspen groves and to the mountains looming in the distance. With a seasoned sarcasm, he said, “This is peace, is it not?”

On the one hand, I couldn’t help but agree. My experience in that moment matched what I had learned about peace as a young, white, evangelical faith leader. I was in a beautiful place, relaxed, on a spiritual retreat, and among good friends. There was no conflict that I could see, hear, or read about. All seemed “right” in the world—or at least on the porch of that particular cabin.

But on the other hand, I knew that peace meant something far more than the general experience of tranquil stability or absence of conflict. I knew that the very moment of “peace” we were experiencing in the mountains was likely, at the same time, a moment of terror for countless friends around the country and world.

I knew this because I arrived at the mountains having just left encounters with pain. A month prior, I had been in the epicenter of the very complex Israeli-Palestinian conflict where I had experienced, firsthand, the trauma of this decades-old struggle. Just a week before, I had been in the borderlands between San Diego and Tijuana where I had encountered the trauma of Central American migrants, Latino deportees, Haitian asylum seekers, and Syrian refugees. Closer yet, I had just traveled to the mountain lodge from my home in San Francisco’s East Bay, where the divide between the black and white communities was growing dangerously wide and where conflict between my neighbors was destabilizing the neighborhood.

While I was at ease on that porch, my life and work had me in the thick of conflict in my own neighborhood, within my country, and throughout the world. My experiences had convinced me that the peace God waged in Jesus resulted in something far bigger than a sense of calm and stability for the privileged.

But to define it? I was stumped. After listening to my silence, my mentor offered this counsel:

Everyone defines peace differently. The vision for peace that you have is holistic and has the potential to inspire people of faith to embody it in ways that will change the world. But your definition needs to flow from the Scriptures. Start with the cross and then work to define what it is that you’re hoping to bring to life in the midst of our divided world.

Identifying the cross as the starting point of theological exploration was something I had never been encouraged to consider. As I had only ever encountered the story of God from a chronological perspective, I had come to understand the cross as the continuation of the violent, warrior God motif of the Hebrew Scriptures. My Christian upbringing had led me to understand the cross not as a place of peace but as a tool of torture, wielded by a wrath-filled God, and focused exclusively on my sin.

Imagine, therefore, the moment when my odyssey took me through the Gospels to Colossians 1:18–19 and face-to-face with a cross that declares the extravagance of God’s restorative wingspan. It was there I realized that not only did the cross redeem the human soul, but it also heals broken identities, renews creation, mends divided relationships, renovates and replaces unjust systems, and repairs international conflicts.

Peace, then, as defined by the cross, is the restoration of all things. It is the holistic repair of severed relationships, the mending of the jagged divides that keep us from relationship with one another. According to Colossians 1, the implications of the cross were comprehensive and conclusive: God had waged a decisive peace in Jesus, and it had worked. That meant that God is the Great Peacemaker and restoration is the mission of God.

Accompanying the emergence of shalom’s elusive definition was a more expansive understanding of who God is, whom God is for, and what God accomplished in the life, death, and resurrection of Jesus. I had discovered a God who sees the humanity, dignity, and divine image in every human being. Here is a God who sees our pain and our plight and, instead of remaining distant or walking away, chooses to immerse himself into the radical center of it. Here is a God who, from within the complexities of our conflicts, contends for our flourishing in costly, creative ways. Ours is a God who stops at nothing to see restoration spring to life.

While all of that is both true and exciting, we’re left with a new set of questions. If God’s peace was so decisive, then why do we yet live in a world divided by pain, misunderstanding, fear, and hatred? Why does conflict seem to rule the day? Why are our neighborhoods saturated with violence-fleeing refugees and our prisons disproportionately filled with people of color?

Turns out, the unveiling of shalom’s definition was not the finish line—it was simply a new beginning. The very next destination along the way was 2 Corinthians 5:18–20 where Paul, reflecting on what the cross and empty tomb had accomplished, identifies us as the reconciled beloved who are commissioned as beloved reconcilers. While God’s peace was decisively waged in Jesus, God’s peace becomes real in the world when we embrace our vocation as everyday peacemakers.

As we become women and men who, like God, learn to see the humanity, dignity, and image of God in every human being and immerse ourselves into the world’s divides, intent upon listening long, and contend for others’ flourishing in collaborative, costly, creative ways, we actively join God in ushering in the restored world that God is making. Our physical presence and practice in sync with the Spirit of the Resurrected One cause us to become the ongoing embodiment of God’s restorative mission—his shalom—here and now.

Shalom takes years, is always costly, shows up in myriad forms, and usually surprises us when it arrives. It looks like my friends Ben, an Israeli Jew, and Moira, a Palestinian Muslim, who both lost family members to the conflict. They are former enemy-neighbors who now refer to themselves as a family, co-creating a mutually beneficial future by teaching the children of their divided land to choose love over fear and reconciliation over revenge. It looks like my Egyptian-American friend Catherine, who offers artistic avenues for healing and rehabilitation for incarcerated kids. Shalom looks like my Mexican friend Samuel, who created a simple set of raised garden beds in Tijuana called “border farms” to remind recently deported men of their dignity and value through the creation of jobs. It looks like my friends Bethany and Matt and Sandra and Kevin, who have chosen to rescue kids from the foster care system and become family with them.

The shalom God is making and that we get to be a part of ushering in looks like a world where sisters and brothers no longer kill their sisters and brothers and where women and children are no longer exploited for the pleasures of men. The shalom God is making is one in which senseless gun violence no longer produces dead kids in our streets and in which immigrants and refugees no longer hide in fear in the shadows of overcrowded apartments. It’s a world where human beings are no longer trapped in cages, where addiction no longer has power, and where hunger and thirst no longer plague humanity.

This shalom is possible only because God waged peace in Jesus and it worked. Joining the Spirit in making that peace real in our world is the adventure to which we’ve all been called.

+ The above is excerpted from a series available here. 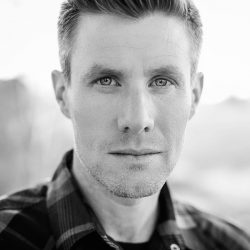 Jer Swigart (MDiv ’11) is a church planter, community organizer, professor, and cofounder of a peacemaking training organization called The Global Immersion Project, which forms, equips, and mobilizes individuals and communities to help bring healing to areas of conflict. His engagement within national and international conflicts has equipped him to guide those in the North American church who seek to become instruments of peace in the world. He’s a consultant, speaker, and coauthor of Mending the Divides: Creative Love in a Conflicted World (InterVarsity Press, 2017).