Cars 2 has its predecessor’s hero, Lightning McQueen (Owen Wilson), involved in a globe-trotting grand prix with the other automotive inhabitants of Radiator Springs along for the ride as his pit crew. Most importantly, his best friend, Mater the Tow Truck (Larry the Cable Guy), accompanies the crew, because Lightning is made to feel guilty about not taking him to any of his other races. Through a series of mishaps, Mater is mistaken for an American secret agent and finds himself caught up in an international spy caper.

This is Mater’s film. Lightning’s attempt to win the grand prix is simply the stage upon which Mater’s story takes place. If you like the humor of Larry the Cable Guy, and if you found Mater delightful in Cars, you will love this movie. If, like me, you think Mater is the most annoying character Pixar has ever produced, you will not enjoy this film as much.

That’s not to say you won’t enjoy it at all. There were parts of this movie that I loved. Pixar takes the living-cars-as-characters conceit to its most exciting extremes in Cars 2. Think about your favorite James Bond stunts of all time. Now, imagine Bond performed those same feats in a car, and you have Cars 2’s best sequences.

Central to the story is Lightning’s embarrassment by Mater’s behavior and Mater’s shame at being thought an idiot. In the end, Lightning, Mater, and the rest of the characters all learn to accept Mater for who he is, and everyone’s happy. 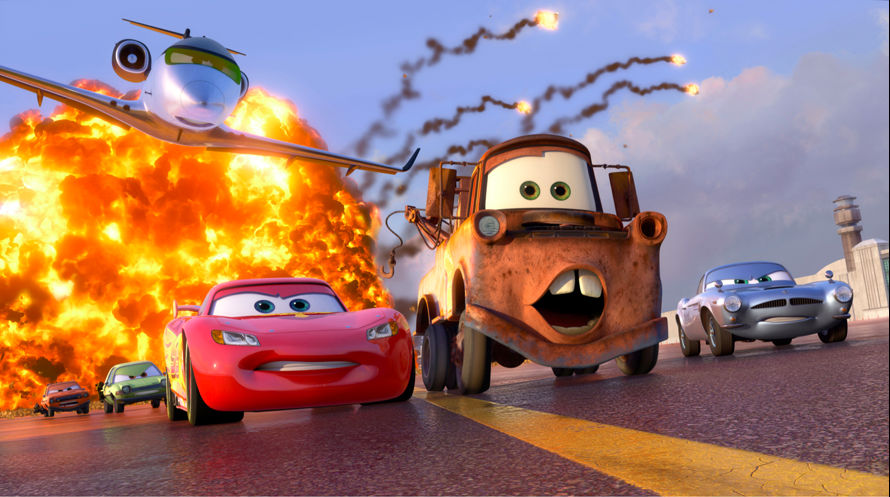 But I don’t buy it. Lighting at one point says to Mater, “You don’t need to change to fit into society. Society needs to change fit you in” (paraphrase). I contend that while society does need to accept Mater for who he is, Mater needs to learn how to behave in social situations. If the “adult” Mater is unwilling to develop social skills, I don’t think we should be laughing at him. If he is developmentally disabled, we most certainly should not be laughing at him.

But Mater isn’t developmentally disabled. Mater is a “hick,” and Cars 2 relies on Mater’s hick-ness for humor and theme.  This is a much-used narrative trope, the ultimate message being that though backwards by societal standards, the rural dweller is in touch with simpler, more fundamental truths than his or her urban counterpart, and it is in civilized society’s better interest to adjust to accommodate the rural person’s presence.

This idea is misguided, because we rarely see ourselves as part of civilized society. We most often think of ourselves as “hicks” in one form or another, because a “hick” is just someone who is culturally obtuse. Being from a small town, I am a “hick” when I move to the city, and the same social dynamics are at work for someone who moves from the city to my hometown. The “hick” trope is simply a way to demand acceptance rather than to do the hard work of becoming culturally aware.

I think the intended message of the film is one of tolerance and acceptance – namely, between Lightning and Mater – but by setting it on a world stage and by stating that society needs to change to include Mater without stating that Mater needs to change as well, Cars 2 expands the scope of tolerance and acceptance considerably and complicates an otherwise simple message about friendship. I can accept a lot of strange behavior from a friend when it’s just the two of us, but my friend cannot act similarly before the Queen of England.

If Mater would have done the difficult work of understanding and integrating into the new cultures he experiences around the world, and if Lightning had been more patient in helping Mater to integrate, Mater would not have diminished. He would have grown. We do not lose our identities as we experience other cultures. We expand them. We become more compassionate, more patient, more humble, and more loving of every person we encounter in this increasingly interconnected world.