Until recently, the role and impact of Latinas in church leadership inside and outside the United States remained largely unknown. Explorations of this topic have brought to the fore the definitive role Latinas have played in evangelizing, teaching, pastoring, and establishing churches since the early 1900s.1 Although the path is uphill and “checkered,” the number and visibility of Latinas serving as pastors of big and small churches and in key leadership roles seems to be moving slowly but steadily forward.2 Today, you can turn on Christian Spanish TV and easily find a pastora preaching to Spanish-speaking audiences throughout the US and Latin America.3 Although decades have passed since the ordination of the first Latina pastor in a mainline denomination, Latinas are reaching unprecedented heights in the echelons of leadership positions traditionally held only by men. We can now name at least four Latinas who are serving as bishops in their denominations. This includes the first Latina (or Latino) to serve as one of the executive ministers in a four-person Collegium of Officers for a mainline denomination.4 Some are also serving as conference ministers and superintendents. More and more Latinas are also earning doctoral degrees that open doors for conferencing, teaching, preaching, and modeling a new paradigm in otherwise traditionally restricted spaces.5

Still, “slow but not steady” may well better describe many denominations where much of their growth is directly attributed to Hispanic presence—especially that of women. In the Assemblies of God, for instance, the 14 superintendents of the 3,300 ministers in the Hispanic districts are male.6 Hispanics are also growing in Pentecostal denominations that do not ordain women but promote male Hispanic leadership.

It is common to blame Latino machismo for limiting women’s roles in church leadership. However, this is hardly the case for denominations where Latinos are not in national leadership positions or where their contributions are viewed as somewhat marginal to the core. My informal conversations with some Latino pastors in denominations that forbid the ordination of women reveal that these pastors are in favor of ordaining women. However, the conversations also reveal a sense of powerlessness against the entrenched leadership and patterns of scriptural interpretation that dictate fixed roles for men and women in the church and home. More important, and at the center of their own radar, is the Latino struggle to dismantle racial biases and prejudicial attitudes that—intentionally or not—tend to keep the voice and needs of Latino pastors at bay. This struggle to be heard and to carve out a place within the powers that be subsumes other needs, especially that of advocating for the freedom for women to exercise a call to ministry within their denominations. But would things be different if Latinos in such denominations had more of a presence and a voice at the table? While there are always exceptions (and I believe those numbers are growing), past trends do not indicate this to be the case. It took women’s persistent voices of protest, for instance, to enlighten Latino liberation theologians to the truth that the liberation they fought for would not take place until men themselves—those in power as well as those calling for freedom from oppression—stopped exploiting and marginalizing the voices of the mothers, daughters, and abuelas in their lives and in the workplace.

As I reflect briefly on the Latina trajectory in the church and the work that still awaits, I am reminded of and inspired by my own Pentecostal roots. As a Pentecostal, I with others called upon the Spirit to help us reach new heights in our spiritual and daily jornadas. No one saw a problem with my father, the pastor, calling me his “pastora asistente,” or in his affirmation of everyone’s gifts, young and old, woman or man. Indeed, the sense of urgency that compelled us to call for the power of God in our lives to be witnesses of God’s grace to all meant that no one’s gifts or calling was expendable. Stirring things up is the work of the Spirit who empowers and leads us to a new day, with new hope and vision. Some of us have lost the sense of freedom that comes from fearing nothing and no one but our own unfaithfulness to the Spirit’s leading. Today, the ever-present Spirit of God summons us to a holy audacity that dares to judge and challenge patronizing attitudes toward women called to ministry, even if this also entails critiquing that which Latinos hold dear—our cultures. This same Spirit bids us to read the Scriptures through the depth and breadth of the gospel narrative meant to free us to live out of a new order where Christ is the only Lord and we are all servants to one another.

Thankfully, there are leaders, pastors, and whole denominations that are answering this call. The Rev. Ana María Falcón, who in 1989 fought for a change in the constitution of her denomination prohibiting women from fulfilling their call through ordained ministry, is one of them.7 Twenty-eight years later, the Iglesia Cristiana Pentecostal can boast of a clergy, men and women, open to the summoning of the Spirit for the work of God’s reign. There are many more stories like Rev. Falcón’s that, with the Spirit’s sure help, are unfolding. Like them, I believe that in Christ all things are possible—including a time when we will be so centered on living and spreading the good news that the question of the issue of women living out their call as pastors, teachers, and prophets will be a thing of the past. So help us, God!

1. See, for example, Gastón Espinosa, “Your Daughters Shall Prophecy,” in Women in Twentieth-Century Protestantism, ed. Margaret Lamberts Bendroth and Virginia Lieson Brereton (Chicago: University of Illinois Press), 25–48.
2. Espinoza, “Your Daughters Shall Prophecy,” 26. Before his passing (circa 2006), Otto Maduro noted that “as many as 15 percent of the [75] Latino Pentecostal churches in Newark have female pastors.” See Bruce Wallace, “Latino Pentecostals,” Drew Magazine, Fall 2008, http://www.drewmagazine.com/2008/09/the-latino-pentecostals/.
3. CTNi daily features well-known pastor/apóstol Wanda Rolón of a megachurch in Puerto Rico, La Senda Antigua. Other Latina pastors, including the senior pastor/apóstol Myriam Saldaña of Centro de Restauración, another well-known megachurch in Orlando, Florida, also appear.
4. These include Bishop Minerva Carcaño, elected in 2004 to the episcopacy of The United Methodist Church, the second-largest Protestant denomination in the US; Bishop Cynthia Fierro Harvey is the second Latina bishop (2012). The first election is more than 50 years after the ordination of the first Latina, Julia Torres Fernández, by the UMC in 1961 and 20 years after the first Hispanic bishop was elected in 1984. The Rt. Rev. Bavi Edna “Nedi” Rivera was consecrated the first bishop suffragan for the Episcopal Diocese of Olympia, making her the 16th woman bishop in the history of the 70 million-member worldwide Anglican Communion. The Rev. Linda Jaramillo is the first Latina to serve as a member of the UCC Collegium. See, respectively, http://www.umc.org/who-we-are/united-methodist-bishop-firsts; http://episcopalarchives.org/cgi-bin/ENS/ENSpress_release.pl?pr_number=051004-1; http://www.ucc.org/about-us_meet-our-officers (accessed December 28, 2014).
5. In 1999, I was only one of about five Latina Protestants who had achieved a doctoral degree in some area of religion.
6. The 14 Hispanic districts represent nearly 2,000 churches. See the Assemblies of God Office of Hispanic Relations webpage: http://ag.org/top/Office_of_Hispanic_Relations/ (accessed December 29, 2014).
7. Per Elizabeth Conde-Frazier, “Being the Gospel Together: The Marks of an Evangelical Ecclesiology,” in Latina Evangélicas: A Theological Survey from the Margins, by Loida Martell-Otero, Zaida Maldonado Pérez, and Elizabeth Conde-Frazier (Eugene, OR: Cascade Books, 2013), 97. 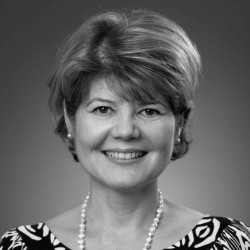 Zaida Maldonado Pérez is professor of church history and theology at the Florida-Dunnam campus of Asbury Theological Seminary.