Like many others who grew up in Christian homes, I was taught that healing comes from God. Yet, even as a boy, I struggled to reconcile the apparent promises in James 5:14-18 with my personal experience. James seemed to suggest an almost formulaic guarantee of healing, whereby a person who becomes ill simply needs to: (a) call elders, (b) get anointed and prayed over via the “prayer of faith,” and (c) get well. In contrast, even in my youth, reality often seemed to involve a much more complex picture, including the protracted illnesses or death of godly people, even some who had been anointed by elders. Back when hospital visitation by children was forbidden, my father was taken away by ambulance when I was eight years old, and I did not know if I would ever see him again. My mother had polio as a young girl, and I never saw her healed. The results of her illness, a deformed right leg and fused ankle, were simply part of reality. My only uncle suffered for two years with a brain tumor and died at only 62 when I was 16. These and other events supported my growing conviction that God was all-powerful, but still sometimes said “No” to requests for healing for reasons that were not always understandable.

Whereas I still struggled with why God did not always heal, I was encouraged by the Apostle Paul’s testimony regarding God’s refusal to heal his “thorn in the flesh” (2 Corinthians 12:8, 9). Paul was certainly a person of great faith, yet he trusted God’s refusal of his repeated request and rejoiced in the idea that God’s power became more evident in his human weakness. This explanation helped me, but the juxtaposition of Paul’s testimony with James’ exhortations still prompted me to chuckle as I wondered whether Paul would have felt unwelcome at James’ church, given his apparently insufficient faith!

It seems the same is true today, and the entire spectrum of views on healing can be found. Some hold that prayer with enough faith will always produce healing, while others limit prayer to a fatalistic “Thy will be done” and focus more hope on medicine than on the Great Physician. I have always found myself living in the space between these two extremes, but no matter what the position for any Christian, we all must acknowledge that God obviously does not heal every person, no matter how faith-filled that person might be. At the very least, we must agree with what a friend of my father’s once said with a twinkle in his eye: “God heals you of every disease except the last one!” Indeed, regardless of theological background, all Christian teachings acknowledge that each of us will die (Hebrews 9:27).

Given that God does sometimes say “No” to prayers for healing, how should we respond? This question once again came into focus for me in 2010, when I first suspected that my mother might be starting down the dark road of Alzheimer’s dementia. She began showing clear signs over the next year, and I fervently prayed that—if God willed—she might be spared; but by 2011, it seemed certain that God’s answer was “No.” By the fall of 2012, it became no longer safe to have her living alone, regardless of how many checklists were posted on the walls or reminders were taped to mirrors. It was time to transition to assisted living. By the fall of 2013, Alzheimer’s had robbed her of even more, and she needed to move to a memory care residence, which provided even more intensive assistance.

I have known people who, if called to pray for a seriously ill person like my mother, would “by faith claim healing in Jesus’ name.” In one instance years ago, a well-meaning couple made this declaration regarding a mutual friend who had advanced cancer. When he died several days later, they awkwardly explained to his wife that this must have been due to her lack of faith, as though faith was a measurable substance, and she had not mustered a sufficient quantity.

It seemed to me that this couple had an oversimplified understanding of God’s mysterious ways, which prompted their equally oversimplified and deeply hurtful explanation when things did not turn out as they hoped. In contrast, whereas I too believe that God can heal any disease, I also have observed that God often does not do so, and I do not think this can simply be attributed to a lack of faith. For one thing, whereas I believe that God always invites our requests, I do not think God welcomes demands or declarations, and Job seems to have come to the same conclusion (Job 42:1-6). So then, how are we to respond when God says “No” to healing? Throughout her life, and particularly in her twilight years, my mother lived out at least three responses: acceptance, gratitude, and perseverance.

When facing her own life challenges with polio, my mother personified acceptance as an important first response to God’s “No.” Paul also modeled this regarding his thorn in the flesh. True, if God’s answer is not yet evident, we are exhorted to pray and not give up, but sometimes even “No” answers are unambiguous. In such situations, strong faith can be manifested by a willingness to trust God’s refusal, and doing so shows our confidence in God’s love and will.

As noted above, by 2011, God’s “No” was clear to me regarding my request that my mother be spared from Alzheimer’s disease. Even as her dementia fog thickened, however, her faith persisted. Whereas some might assume that her terminal illness was an increasingly dismal endeavor, I watched her stay focused on the light of Heaven even as her own cognitive abilities declined. This was exemplified by her persistent gratitude.

This was never more evident than one day in 2014, by which time she was no longer able to have meaningful conversations, use a fork with confidence, get dressed, or use the bathroom alone. Yet, as we sat together in the garden, fenced in to prevent wandering, she smiled at me and said, “I’m thankful for the memories He has let me keep!” Even then, she illustrated that thanking God for the blessings we retain in the midst of adversity can keep us focused on His promise to work all things—including bad things like illness—together for good.

That is not to say that we need to thank God for everything, particularly not for bad things that were not part of creation’s original design. For example, I believe that God hates illness and death even more than we do. Rather, we can follow Paul’s exhortation to give thanks “in everything” (I Thessalonians 5:18), believing that God can even bring good from evil things that never had a place in the Garden of Eden. Indeed, God brought our greatest good—redemption—from the greatest evil—the death of Jesus.

Some might assume that my mother suffered from a Pollyannaish perspective, but this has never been true. On another occasion when her fog momentarily lifted, she observed that, “Our doubts are part of how God draws us to pray.” For me, her words exemplified her perseverance. When the Psalmist was walking in “the valley of the shadow of death,” his commitment to have no fear was not based on the search for either a convenient detour or a comfortable roadside inn. No, the Psalmist walked all the way “through” that valley while continuing to trust God’s character.

My mother was peacefully promoted to Heaven this past November. As I reflect on her journey, I am inspired by her acceptance of hardships, her gratitude for all of God’s blessings, and her perseverance through adversity. I pray that I will be able to follow in her footsteps as trials, illnesses, and even my own eventual death become part of my story. I pray that I will have faith strong enough to accept all of God’s “No” answers, giving thanks for the blessings that persist as I strive to persevere, walking through the increasing darkness in the light of Heaven. Indeed, when God says “No,” we have perhaps the greatest opportunity to walk in faith. After all, true trust in God’s character is seen most clearly when God’s actions go against our hopes and expectations. It is then that faith shines most brightly. If my mom were still able speak her mind, I am sure she would agree.

+ Jeffrey Bjorck coauthored a book with his mother, Irene Bjorck, written during the course of her illness: Twilight Meditations: One Woman’s Thoughts of God as Alzheimer’s Advances. 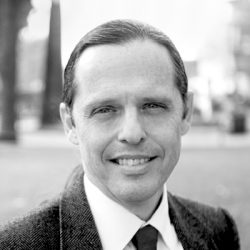 Jeffrey P. Bjorck (PhD University of Delaware) is a Professor of Psychology at Fuller Theological Seminary and a licensed psychologist.