Fuller Theological Seminary is different. Anyone who has had the pleasure of walking the grounds of the main campus in Pasadena, nestled there between busy streets and elegant palm trees, or of attending any of its other urban campuses knows the Fuller difference. Now several decades after my Fuller days and with many years of involvement in the theological academy, I have an even greater appreciation of that difference. Fuller allowed me the space to think the faith freshly and consider anew what it means to be someone convinced by the gospel. At Fuller I was guided into an expansive terrain where I could redefine what it meant to be an evangelical, but I think more to the heart of the matter, at Fuller I entered the deep and beautiful struggle of being a Christian intellectual.

Christian intellectual life is by no means the sole property of those who inhabit the theological academy or those who live their lives from the sight lines of pulpits or the comfort of counselor chairs. Christian intellectual life is the inheritance of every Christian and the calling on every believer to reflect deeply about their faith from the sites in this world that matter—where lives are at stake, and hope hangs in the balance. For me one crucial site has always been where race and Christian faith have enfolded one another. Race and Christian faith have always played together in the Western world, woven inside of each other like strands of braided hair. We know this but we do not like to remember this, because remembering the torturous racial past of the modern world is difficult remembering. That remembering obligates us to give an honest account of ourselves and giving an honest account of oneself is serious moral work.

It is precisely this serious moral work that continues to escape the attention of many Christians in this America. We have never unbraided the strands of race and Christian faith, and because of this our Christian faith is deeply diseased. That we are Christians is not in dispute; that we understand what it means to perform our faith, to think as Christians—that is contested terrain. What we are in need of at this crucial moment are women and men who know how to think their faith, perform their faith in ways that untangle the racial imagination from the Christian imagination. What we desperately need at this critical moment are indeed Christian intellectuals.

We must confront the principality of whiteness. We have now reached a point where we can name what has not been adequately named, and that is whiteness as a principality. For a myriad of historical reasons, we have not had the conceptual ability to name whiteness for what it is—not a particular people, not a particular gender, not a particular nation, but an invitation, a becoming, a transformation, an accomplishment. It was an accomplishment sought after by immigrant group after immigrant group coming to these shores hoping to strip away their ethnic past and claim an American future. Before that it was an accomplishment born of discovery, of European men who discovered their unchecked and unrestrained power over indigenous peoples to claim and rename and alter their worlds. Before that it was an accomplishment born of Christian election and supersessionism that removed Jewish people from the privileged position of being the people of God and replaced them with people who imagined their flesh (white flesh) to be saved and saving flesh.

We who work and live in the academy are yet to face our spiritual bondage in this regard. The history of Christian institutions of higher education in this country is not simply the history of Christian striving. It is also the history of immigrant longing, longing for survival, for acceptance, for accomplishment, for making good in America. It is the story of uplift, but it is also the story of racial assimilation and of a reality of formation that constantly reestablishes whiteness. Until Christian educational endeavors in this country face this legacy and its ongoing influence on what we imagine an educated person to look and sound like, we will constantly confuse racial assimilation with Christian formation.

“The therapy room may have become the new confessional booth, and therapists in some way may be serving as secular pastors. We create space for people to speak their truths, to share their secrets, to confess what has been done to them and what they have done to others—to lament, to grieve, to cry out to others, to say that all is not right with the world. But I believe that as important as therapy can be to some people, as a Christian it is ultimately the work of the church to create space for this kind of truth-telling and confession and subversive obedience.”

+  Brad D. Strawn is the Evelyn and Frank Freed Professor of the Integration of Psychology and Theology in the department of clinical psychology at Fuller. Read more from him and other members of the community here.

To be a Christian intellectual also requires that we confront the principalities of greed and violence. I have stopped ignoring the true history that the men who founded this country were in fact bound by their lust for land, natural resources, black slave labor, and power to control their destiny and that of this world’s indigenous peoples. I have also stopped ignoring the history of the gun in this country and its pride of place in guiding men in the performance of their masculinity. We are a country that has never had the power to resist death or its greatest power, violence. I have stopped ignoring the fact that greed and violence were the midwives of this country. But unlike the biblical Shiphrah and Puah, these midwives did not fear God; they acted like God for us.

It is a Christian question that is not just for Christians. It is a Christian question because we know principalities. Black people and all people of color in this country have especially felt their power, watched their expansion, and seen them take hold of lives and draw them toward death. But what is necessary at this moment is not to know them but to unmask them. What is necessary at this moment is the unmasking, the exposing, the naming, and the challenging of those who are yielding to the forces of greed and violence.

+  Dei Selah Thompson, currently a student at Fuller in the Master of Divinity program with a concentration in worship, theology, and the arts, is on staff at Fuller processing student applications in the Office of Admissions. Read more from her and other members of the community here.

Edward Said also said that “the intellectual always has a choice either to side with the weaker, the less well represented, the forgotten or ignored, or to side with the more powerful.”3 I have found this choice to always be at play in the academy. Despite our endless qualifications, justifications, excuses, and complexities, it always comes down to whether our work presses the concerns of those in power or those at the margins. I am afraid that the recent history of Christian institutions of higher learning is that we are producing graduates who are in significant numbers choosing to side with the more powerful in this world, who have accepted greed and violence as the given. A Christian intellectual in this second sense is one committed to the unmasking of the powers of greed and violence, and who is willing to name people and processes that bind death to the bodies of women of color and their children.

This is a work of discernment, but sadly we have so mystified discernment that we have lost sight of its concrete history. God clearly drew our attention to the widow and the poor, to the stranger, to those who are weak, hungry, or in prison. God even drew our attention to a poor young girl carrying a child and living in danger. The lines of direction for the intellectual life are clearly drawn, and we need Christian intellectuals who never forget where those lines lead.

To be a Christian intellectual today also requires that we confront the principality of fear. In 1961, Martin Luther King Jr. gave a speech at the annual meeting of the Fellowship of the Concerned in which he explained the logic behind civil disobedience. His argument was quite simple but elegant—just people should obey just laws and the processes through which just laws are created, but just people should disobey unjust laws and challenge the processes that create unjust laws. King also answered the question that would naturally arise from this argument: How do you know just from unjust laws? Again his answer was quite simple but profound—unjust laws increase suffering and silence voices, and in this regard such laws are immoral. King marveled at the courage of the women and men (especially the young) who were willing to engage in civil disobedience against unjust laws. He said, “I submit that the individual who disobeys the law, whose conscience tells [her] it is unjust and who is willing to accept the penalty . . . of jail . . . is expressing at the moment the very highest respect for the law.”4

“Our prayer needs to be prayer that takes up the prayer of the widow and the prayer of the martyrs—not because we’re in their position, but because we commit ourselves to identifying with them in being concerned for justice. Remember that justice requires the activity of God, and its achievement belongs to the End. Our action will achieve little if it’s not accompanied with as much energy given to the kind of prayer the widow prayed and the martyrs prayed and the Israelites prayed in the Psalms.”

+  John Goldingay is the David Allan Hubbard Professor of Old Testament in the School of Theology at Fuller. Read more from him and other members of the community here.

If there is anything that the civil rights movement taught us it is that fear normalizes oppression. Fear normalizes the absurd. African Americans and other people of color have always had to face a choice—do I push against the absurdities of racial oppression and white supremacy or do I accept them as the given? Choosing to challenge the natural order of things is a challenge made for the sake of life. But not everyone chooses life. This is also part of the legacy of life in America that continues to this very moment. It is absurd to accept a society awash in guns. It is absurd to think we are most safe when we are most armed. It is absurd to think that health care should be part of a calculus for profit. It is absurd to think that workers should be reduced to indentured servitude or, worse, slavery. But we have normalized these absurdities.

There is a sacrificial logic at the heart of overcoming the fear to speak up and speak out and press against the absurdities of injustice and oppression. And sacrifice has always joined the political to the theological, the social to the religious. Martin Luther King Jr. called such sacrifice acts of redemptive suffering whereby people are willing to take on the form of the criminal and put themselves in harm’s way for the sake of others. We understand what King was saying. We of all people hear the echo of our savior’s life in his words. It is that echo that should sound in our words and in our actions. But there is another characteristic of Christian intellectuals that I must note. They find the joy in life. They spy out the joy even in the midst of struggle. We cannot give witness to the life of God if we do not give witness to the love of life and the love of people. Ultimately, a Christian intellectual is one who is convinced by the love of God for this world and is compelled to live out that conviction. 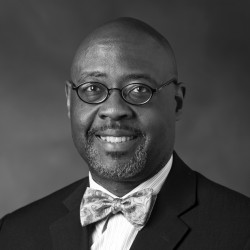