We have all heard stories of Christian young people who have struggled with their faith because of science. What can ministry leaders do to better prepare young people as they consider science careers? How can all God’s people develop a better appreciation of God’s revelation in nature? From 2009 to 2012, Rev. Scott Hoezee and I codirected The Ministry Theorem—a project at Calvin Theological Seminary to provide pastors and congregations with resources on science. Here are some successful practices I found in my encounters with many congregations.

More Than One Christian View

Many parents and pastors are wondering what to tell their children about creation and evolution. While Sunday school classes often cover Genesis 1 around kindergarten (with kids coloring pictures of what God created on each day), most curricula do not address science again before kids leave for college. Yet issues of creation and evolution can be addressed in age-appropriate ways throughout Sunday school. Elementary school children already learn about idol worship from other Old Testament stories, so teachers have an opportunity to contrast Genesis 1 with the idol-rich creation stories of other cultures. Middle school students can be given basic tools for considering creation and evolution such as the contrast between the “how” questions answered by their science lessons in school and the “who” and “why” questions answered in Scripture. Middle and high school students can find role models by reading the testimonies of scientist Christians.

Youth need to be encouraged to discuss their questions and doubts, while affirming core beliefs. When asked why they left the faith, scientists often mention that the church was not open to their questions and told them to “just believe.” Churches can demonstrate openness to questions by teaching youth about multiple Christian views on an issue. Students need to hear that some Christians accept the science of evolution and others do not, and have a conversation about the reasons why. Too many young people have struggled when they felt they had to choose between clear scientific evidence and the beliefs they grew up with. Even when parents and leaders are unsure about evolution, they can help students by saying, “While I have concerns about evolution, I’ve heard that some Christians accept the science of evolution while still believing in the God of the Bible.”

Difficult issues like origins cannot be addressed in a single event. People need time to ponder the issues, and spaces to talk it through. One church did a six-week sermon series, with parallel curricula for all ages in Sunday school, so that families could work through it together. Another church did a sermon series and discussion group for adults for four weeks, to prepare parents before a four-week series for the youth group. Other churches encourage small groups to read a book on science and faith and discuss a chapter a week. (Since all authors have their favorite view, I recommend discussing at least two books from different authors to learn about multiple Christian positions.)

In our science-saturated culture, evolution is not the only science topic the church should be considering, and not even the most important. With church members encountering the latest medical advances as patients and family members, a discussion on bioethics would be very relevant. Since young people are usually the first to use hot new gadgets, they should be considering the appropriate Christian use of technology. As the issue of climate change becomes more pressing every year, churches need to talk about it, and not avoid it because it is so political. The Evangelical Environmental Network offers many resources for churches, emphasizing ways that creation care benefits the poor and the unborn. One group of churches, with the help of Calvin College, joined together to clean up the local creek that drains the watershed in which the parishioners live, work, and worship. Many of the congregants were not even aware of the size of the watershed or the pollution level in their own creek. This was a hands-on opportunity for all ages, directly caring for their own corner of God’s green Earth.

With so many issues to discuss, Christians can easily get the feeling that science is always attacking the faith. It is essential to balance such conversations with positive responses to God’s creation. After all, the primary response to the natural world in the Bible is to praise the God who made it. The first time I led an adult Sunday school class on creation and evolution, I was amazed how much the participants appreciated simply ending each session with a Psalm reading or creation hymn. Thoughtful frowns turned into relaxed smiles as the group remembered our unity in Christ and the centrality of God as the Creator.

Creation themes can be incorporated throughout worship. One church asked the congregation to submit their favorite creation photos at the end of the summer (from backyard flowers to National Parks), then wove the images into a worship service with creation songs and readings from the Psalms. In addition to flowers and mountains, modern science has revealed incredible glories that can inspire our praise and reflection. Several contemporary Christian musicians have begun to artfully incorporate the wonders of the natural world into their music; Chris Rice sings of “cratered moon and Saturn’s rings,” and Third Day praises the “God of wonders beyond our galaxy.” In one church, an elder brought in modern science when leading the congregation in prayer with these words: “Creator God, out of nothing you created all that is. You hurled the galaxies through time and space. . . . The universe is your hourglass, the continental drift your minute hand, the Grand Canyon your second hand. You are infinite.”

Preachers can incorporate science in the same way they make references to movies, current events, or best-selling books in sermons. To notice these connections, take some time to encounter science: read the science section of the New York Times, visit a local science museum, or ask scientists in the congregation about their work. A visit to a planetarium might give a new appreciation for the vastness of the universe, which could illuminate a sermon on the vastness of God’s forgiveness in Psalm 103:11–12. Pastor John Van Sloten learned about the neural networks in the brain and incorporated it into a sermon on the vine and the branches of John 15.

Preachers are understandably concerned about avoiding scientific errors when preaching, but this should not prevent engagement with science. Some pastors do their own research to get the details right because they enjoy digging into a science topic. Other pastors bring in a scientist (live or by video) so that they do not have to explain the technical material themselves. Others play to their strengths by choosing topics with fewer technical details, such as the Christian motivation for doing science or exposition of Bible passages relevant for scientific questions. Many of the questions Christians have are really about biblical interpretation and Christian theology, areas where the pastor is an expert. Minor technical errors made in good faith are forgivable, but a sermon that argues that mainstream science is wrong on some point can be devastating for the faith life of teenagers who are learning the correct science in school.

Beyond Sunday morning worship and preaching, science can show up in many areas of church life. During a youth camping trip or church picnic, include a nature walk concluded with praise. After a winter evening worship service, invite a local amateur astronomer to set up a telescope in the parking lot to show people the moon and planets. Convert a vacant lot near church into a community garden, so kids can experience firsthand how God provides food from the Earth.

In all these activities, remember that views on science are “caught” more than “taught.” Congregants will naturally pick up on the attitude of the pastor or ministry leader, whether skeptical of science or celebrating science as the study of God’s creation. Visitors will pick up on this too, so these attitudes are part of being a church that welcomes and ministers to scientist Christians. Recently I was invited to speak at a church on the expansion of the universe and the possibility of a multiverse. Several enthusiastic young people in attendance had clearly caught the love of science from the church leaders who planned the event. One girl came up afterward with her dad, both of them marveling at God’s creation. They were amazed not just with the particular things I had discussed, but with the way in which God has embedded wonders at every level of understanding. Everyone can marvel at the starry skies, school kids can learn about the planets and asteroids, and scientists with PhDs can study dark matter and string theory. No matter how deep we look, we keep discovering more and more ways that creation declares the glory of God. 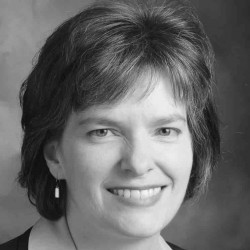 Deborah Haarsma is president of the BioLogos Foundation. Previously, she served as professor and chair in the Department of Physics and Astronomy at Calvin College in Grand Rapids, Michigan. She and Scott Hoezee commissioned essays for the volume “Delight in Creation: Scientists Share Their Work with the Church” (The Ministry Theorem, 2012), which includes her own essay on recent discoveries in astronomy. She wrote “Origins: Christian Perspectives on Creation, Evolution, and Intelligent Design” with her husband, Loren Haarsma (Faith Alive, 2011).