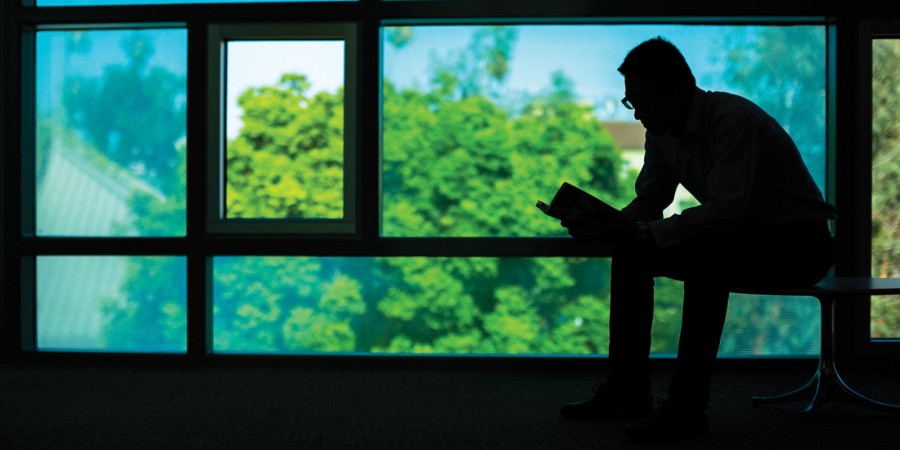 Gabriel Qi [PhD student] started reading historical novels in his native Mandarin language when he was six years old, and by the time he reached middle school in Hohhot, Inner Mongolia, he had already graduated to translations of Western literature. “I wasn’t intimidated by foreign names like my friends were,” he remembers. Over the next five years, he filled his shelves with Chinese translations of Russian novels and his favorite French writer, Balzac, whose works were “an encyclopedia of different kinds of people of his time.” Gabe was following a passion for reading, but along the way he was also gaining a cultural education from books like Fathers and Sons or Le Père Goriot that helped cultivate in him an empathic understanding of others: “While we all put a lot of emphasis on the differences across cultures,” he says, “there are also a lot of commonalities that we human beings share.”

However, the reading that had exposed him to other cultures soon became a means to escape his own; Gabe was turning inward, preferring silence to relationships: “I didn’t want my relatives or mom or sister to talk to me. I preferred quiet.” It was in this deliberate silence that Gabe discovered poetry, especially the atheist poets writing after China’s Cultural Revolution. While his peers worked with academic tutors on the weekends, he was reading and writing poems with monastic discipline, filling notebooks with poems and shelves with notebooks—words that voiced his inner emotional life and stirred in him a longing for transcendence he could not otherwise name: through his writing and reading he “came to believe that there was a Ruler of creation beyond human intelligence and that humans need salvation.” Looking back, he says, it was an important season in his life—even if he’s embarrassed by the immaturity of his early work. “I just wanted to feel sad, but if I hadn’t written those silly poems, I’d still be naïve now.”

It was during a weekend trip to his cousin’s house when Gabe picked up another book that caught his attention. “There was a Bible in my cousin’s bedroom where I lived on weekends during my time at boarding school,” he recounts—a 1919 Chinese translation gathering dust in a trunk by the bed. He read six chapters of Genesis in that Bible before stopping. Looking back, Gabe calls the experience an “unexpected trigger,” drawing him out of silence and toward faith. It was the first of many triggers he experienced, and God continued to give Gabe more—often in surprising places: vulgar fictional characters who cursed God and made Gabe wonder whom they were addressing; gospel verses smuggled into the popular novel The Da Vinci Code that resonated far deeper for Gabe than the story on the surface. “Two years later, I realized that book was heretical,” he says with a sheepish grin, “but the verses from the gospel quoted in that book were profound and deep”—and strong enough to provoke his curiosity about the faith they described.

Wind overflows another world
which belongs to my skin, hair, and eyelashes.

My heart:
overflowing with one name.

Gabe took his love of literature and his interest in Christianity with him to Beijing, where he attended Peking University. “At that time I was anxious,” he says. “I wanted to be a poet, but I felt burdened to financially support my mom and sister.” While his mother encouraged him—“For now, your job is to be a student,” she told him—he still didn’t have a clear sense of where his studying should take him. He tentatively chose English, a subject that was more financially stable than poetry and more poetic than the hard sciences. “It seemed like a good compromise,” he remembers.

In one of his first English classes, Gabe learned his teacher was also a British missionary who felt called by God to teach English to Chinese students. Gabe sent him an email with a long list of questions, and they began to dialogue. “I didn’t know the difference between Jews and Christians,” he says. “It was all foreign—all different. I was asking my English teacher if I needed a circumcision!” And while he began reading Scripture again, archaic translations only added to the confusion: “Sometimes, when I didn’t understand the Chinese, I would see what the English translation said!”

Soon that professor invited Gabe to an English fellowship at a nearby church, and after he had been visiting for a few months, the congregation sang a song that struck Gabe as autobiographical:

It was an epiphany and a moment of deep relief; Gabe knew they were singing his experience. God had made a way for him—through his family who worked every day to give him time to read, through the words of writers and poets who had become his own cloud of witnesses, and through a passion for other cultures that led Gabe to study the very language filling that sanctuary with song.

That summer, Gabe volunteered at a camp for “leftover children” abandoned by impoverished parents who left to find work in the city. Gabe saw in their loneliness his own solitary childhood, and when they had “deep listening sessions”—a time of sharing stories and hopes—he listened carefully and shared his own experiences with them. It was a moment of empathy that triggered a new conviction: Gabe decided to become a psychotherapist. He declared a second major in psychology and, a few years later, moved from Bejing to Pasadena, where he now studies at Fuller’s School of Psychology.

He still reads all the time, but now he’s filling his shelves with books that help him integrate his wide experience into an approach to therapy: “It’s less about opinions or doctrines and more about the embodiment of love and action.” And now Gabe writes in a new way—the poetry has moved off the page into the therapy room, where he uses psalms with clients to help them translate their suffering into a language of praise.

+  Gabriel attends Fuller with scholarship support from the China Initiative—a developing program under the directorship of Professor of Religion Diane Obenchain. The initiative cultivates partnerships with the Registered Church in China and has plans to develop a master’s program fully in Chinese. This story marks FULLER magazine’s first Mandarin translation, courtesy of Gabriel Qi.