On Thursday, October 8, 2015, 25 young adults and a few facilitators gathered in St. Louis, Missouri, to wrestle with the topic of racial justice by engaging the people and space of Ferguson. We became pilgrims as part of the Episcopal Young Adult Pilgrimage to Ferguson, funded by a grant awarded to the Episcopal Church General Convention/Domestic and Foreign Missionary Society (DFMS) by the Constable Fund.

We engaged several community leaders and clergy on our pilgrimage. Rev. Starsky Wilson, a guest on our Saturday afternoon panel, is one I remember well. When I posed a question on racial reconciliation, this was part of his response:

Old Testament atonement is much preferential for me to New Testament reconciliation. Old Testament atonement, when you did something wrong, you made an offering such that the relationship was made right between you and the person you wronged. New Testament reconciliation, God was in Christ reconciling the world to God’s self. The person who had been wronged, who is God, actually makes the sacrifice for the sake of the relationship being right again. Such that, the obligation for reconciliation in these moments goes to young black people who are shot dead in the streets every 24 hours.

Rev. Starsky later suggested that racial justice—seeking out social equity between equals—is a precursor to any form of racial reconciliation. His perspective is full of truth, yet it becomes a stumbling block for Christian communities who want the unity without social equity. In Ferguson, the struggle for racial justice manifests as the people versus the systems of policing, housing, education, prison, job opportunities, and more. Without social equity in these areas, Ferguson is hard pressed to experience racial reconciliation. As I think about our community at Fuller, we are not exempt from the impact of systemic racism. The root causes of the Ferguson uprising are not unique to that context, and if we are not careful to address the social (and theological) disparities within Fuller and our surrounding communities, we will continue to breed the same frustrations among marginalized people.

There is hope for change. Ferguson taught me that in the midst of hopelessness, hope can be present and tangible. This lesson I offer to the Fuller community. As we seek to engage America’s dilemma with race, we cannot overlook that our institution (like many institutions in America) is part of the problem. Fuller Seminary is a product of its time, shaped by culture. Deeply embedded in the foundation of Fuller are the ideologies of whiteness and patriarchy. Yes, we have done much work to combat those ideologies, but we are still a long way from experiencing expressions of racial reconciliation because we have not achieved racial justice within our own walls. The good news is that God, who we claim saves us and others as individuals, can save us as an institution and community, but we must be faithful to live into that gospel truth and repent (change our ways) as an institution.

On my flight back to LA, I met a man from St. Louis named Derek. He reminded me of how complex this fight is. In our conversation about his work, he said something like this: “I find that people are able to connect to a story. When I tell them my story and why this research matters to me, they connect and want to give. I believe that people are good and want to do good. (Even people who have made bad decisions in life.) So if they connect with something they want to be a part of, they will give.”

Derek did not know, but my entire pilgrimage was a journey of uncovering narratives in Ferguson with the hope that I and others would give of ourselves in the cause for racial justice. His belief that people are good and want to do good were the words that stuck with me. They are words of hope that hearken back to the creation narrative in Genesis 1. We were created good. Despite all the hopelessness I encountered in Ferguson related to the sin and problem of racism in this country, I found myself talking with a man from St. Louis who in my parents’ youth and grandparents’ world would have been pegged as the image of my oppressor. Yet we sat side-by-side in the back of a Southwest airplane, and for a moment, I truly believed we were equals in all our differences. Our conversation became a glimpse of hope as the goodness in me connected with the goodness in him. All the messiness of the fight for racial justice paled in the holy communion of the two of us accessing how we were created: good. Let’s be clear: the wonderful plane conversation and embrace in baggage claim did not make racism disappear for either of us. Rather, the communion gave me the courage to fight, to work hard, and to believe that systems can change. It was the drop of hope I needed to ignite an action-based faith, standing on the assurance of what I hope for and do not yet see. Currently, in the society we live in, Derek and I are not equals. The systems inherently give him preferential treatment whether or not he requests it. But as a follower of Jesus Christ, I deeply believe and hold onto the truth that we were created for equality in all of our diversity. In Christ we can find this rich communion in how we live and love one another with a sacrificial love—giving the best of what we have so that others can live too. So as we fight for racial justice, we must remember that no matter how evil the systems are, the people we encounter as the face of those systems have good in them, and we must seek to draw that out and orient it toward God’s justice. 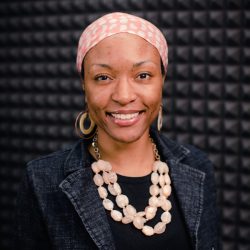 Jeanelle Austin is a follower of Jesus committed to racial justice and a Fuller alumna (MAICS '10 and MDiv '13).