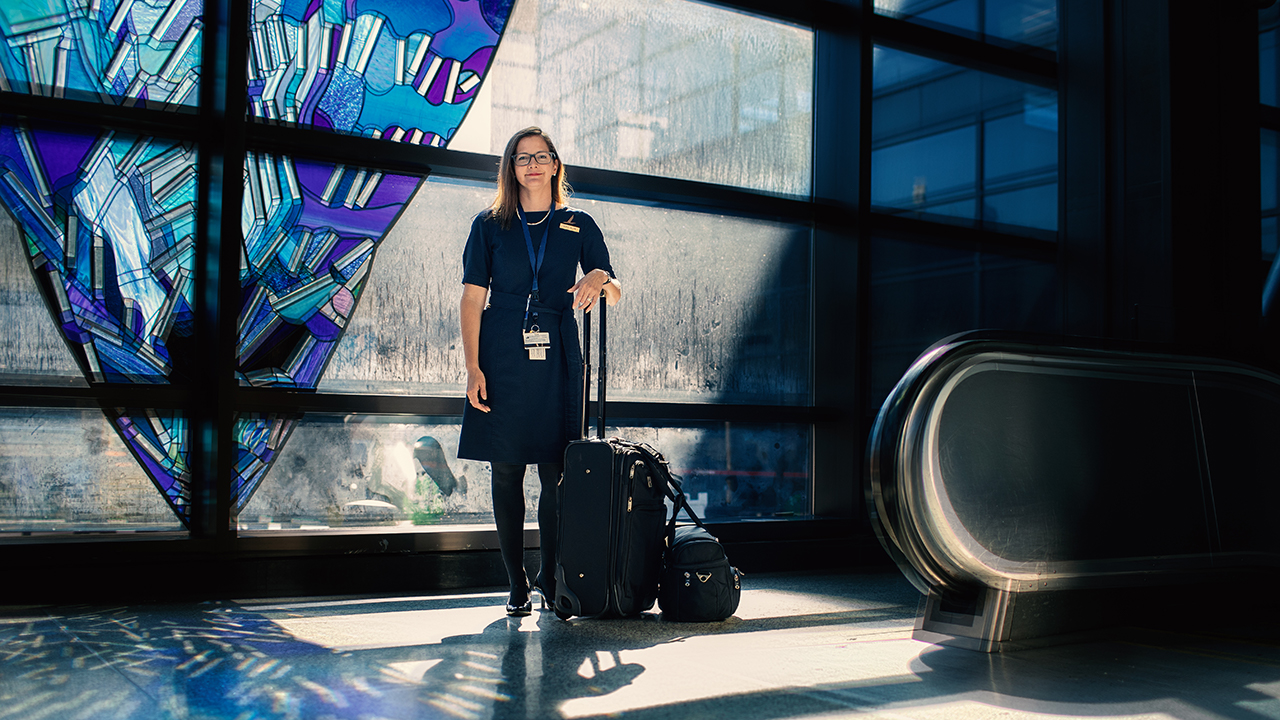 As Kristalyn Jo Simler (MAGL ’11) approached her 40th birthday, she started to feel that her time at Young Life International, where she’d worked for 13 years, was done. While she wholeheartedly supported Young Life’s mission to “reach the furthest kid out,” she sensed the need to expand her ministry. She’d heard someone say, “How can you love the world that God loves if you haven’t seen the world?” and it sparked something in her. “I just knew in my heart that I wanted more people to know who Jesus is,” she says.

With these feelings stirring, Kristalyn returned home from a work trip to Seattle-Tacoma International Airport and saw a sign advertising that Alaska Airlines was hiring flight attendants. She’d never considered working for an airline, but the moment seemed God-inspired—and she decided to go for it. “I literally saw a sign and never would have thought about it otherwise,” she says.

For such a dramatic career change, Kristalyn didn’t experience shocked reactions from friends and family; rather, everyone from her husband to her friends expressed confidence in her choice. “You’re perfect for it,” they told her. “Growing up,” says Kristalyn, “my mom used to say she should have named me Kristalyn GO instead of Kristalyn Jo! I always loved going places; I love people and people watching.” She has a track record of making unconventional and sometimes adventurous life choices, from living in Costa Rica for several years with her husband and having her first child there, to deciding to adopt a second child. While working for Young Life International, she almost never said no to a work trip. Becoming a flight attendant at age 40 made sense to her and her community and, four years later, she hasn’t regretted it.

True to her spirited nature, Kristalyn boldly ventured into her new vocation, where her ministry is just as intentional as it was while working for Young Life. “The ministry part comes in the jump seat, sitting and talking with other flight attendants,” she says. “Everyone is going through a lot and you never realize it.” Well, you never realize it unless you ask how they are doing, as Kristalyn so compassionately does. Instead of picking up a book or making small talk about flying schedules, she makes a point to ask how their day went before getting to the airport, or if anything had happened the day before. That’s when the stories pour out: one recently divorced coworker quietly shares the ups and downs of securing child care, while another confides that he had just helped his aging father move into an assisted living facility. 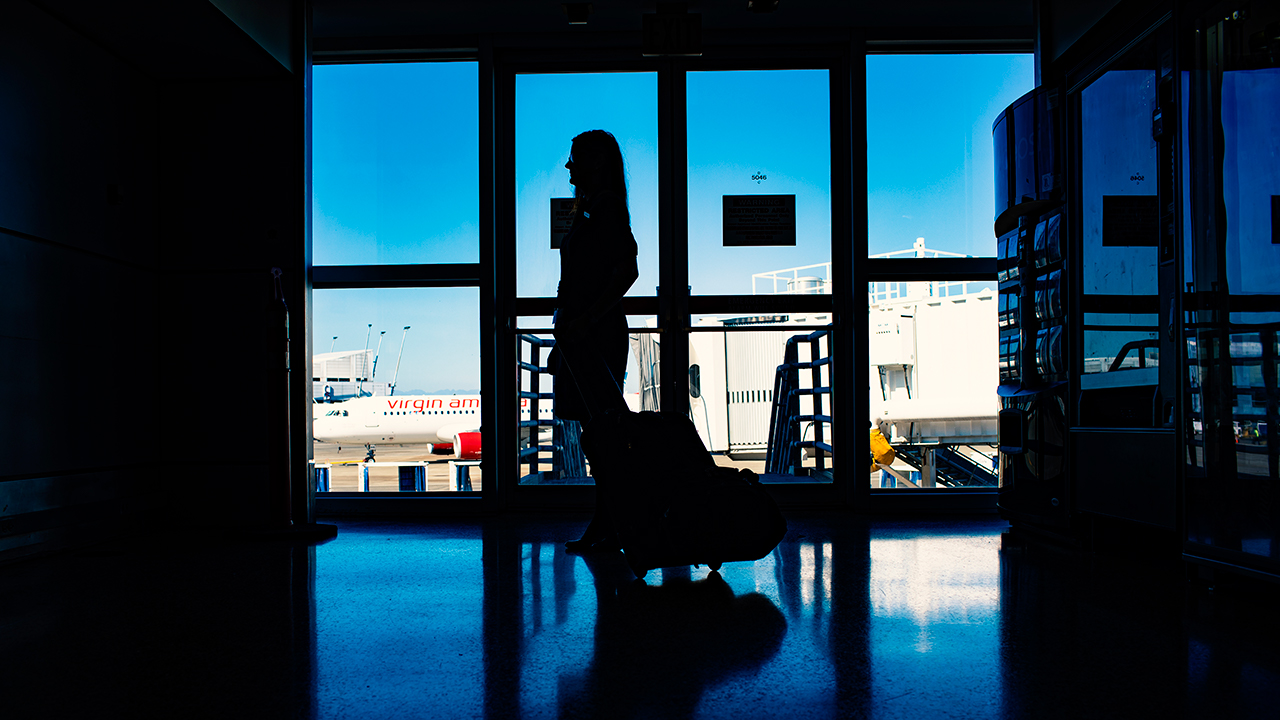 Never knowing what will come up, Kristalyn employs her adaptable temperament in these conversations, ready to bend and flex and offer her own steady smile. “People have commented on how peaceful I am,” she says. For her, ministry is simply “loving people where they are at—literally in the jump seat, but also their place in life.” She rarely flies with the same coworkers twice, but she’ll often follow up on meaningful conversations with a little note in their office mailbox, offering encouragement or saying that she’d prayed for them.

Kristalyn’s ministry of encouragement in the small things extends just as much to the passengers on her flights. From the Midwest to the South, the East Coast to Hawaii and Alaska, the routes she flies offer opportunities to interact with people from all different cultures within and outside of the United States. A graduate of Fuller’s MA in Global Leadership program, she credits her cross-cultural communication courses for preparing her for this part of the job. “It was very applicable to what I now do on a daily basis,” she says. She also found the broad program to validate all of her natural gifts, like a passion for social justice and loving people from different cultures. “The reason I got a degree in global leadership,” she explains, “is because I’ve always had a heart for the whole world.”

As she describes her job, it’s clear that Kristalyn finds real joy in truly seeing others—paying attention to what makes them unique or what burdens they might be carrying. Even though working on a flight can be extremely fast-paced, “I take the time to look at people,” Kristalyn says. Handing out beverages, she tries to make eye contact with passengers who seem down, or give an extra cookie to a person she senses might sometimes be overlooked. From the Spanish-speaking grandma traveling alone to the moody teenager on a family vacation, Kristalyn tries to connect with whoever ends up on her flight. “I just want to let people know that I see them.”

Sometimes, seeing her passengers means handing out Kleenex, other times it’s laughing at their jokes. She references Romans 12, where Paul writes about rejoicing with those who rejoice and mourning with those who mourn.

Kristalyn remembers one flight that affected her deeply early in her flight attendant career, traveling a route the airline calls “the milk run” because it stops at many remote Alaskan villages along the way to its final destination. This particular milk run took place shortly after a small sightseeing plane crashed in Alaska, and Kristalyn’s flight was full of passengers whose loved ones had died in the crash. “It wasn’t a direct flight for any of those people to get out and go directly home, so we had to go three more little stops on this milk run,” she says. She still gets choked up thinking about it—remembering one woman who’d been celebrating her wedding anniversary and lost her husband in the crash; another who had been on a trip with her grown children and husband was now flying home alone. Kristalyn walked the aisles, offering tissues and a listening ear. “I was hugging passengers,” she recalls, clearly moved by the experience. “I was like, ‘I don’t know you and I’ll never see you again, but you’re in the depths of despair, so I can at least give you a hug and a Coke.’”

Another memorable time had Kristalyn rejoicing with those who rejoiced on a plane chartered by a cannery based in Alaska. The flight was full of mostly men heading up for a short but brutal season of hard work. “Many didn’t know English fluently and I wondered if they fully knew what they were getting themselves into,” Kristalyn recalls. On such charter flights, the canneries work with the airline to provide certain food and beverage selections for the passengers, and sometimes they don’t provide anything at all. But this one time, the flight had been catered incorrectly, and Kristalyn was able to provide her passengers with the finest she had to offer from the first-class galley—which she served to them on elegant plates with real silverware. “At first everyone declined my offer, thinking they had to pay,” she says, “but once they understood they didn’t have to, I just filled their trays and laid it before them.”

As they began to eat, she watched as many sat a little bit taller, Kristalyn remembers. “Even now as I recall that trip, it brings a big smile to my face and makes my heart crunch a little bit,” she shares. “They were thankful, gracious, surprised, and joyful. It was a gift to give the unexpected to people who weren’t expecting anything.”

It’s that same attitude that has allowed Kristalyn to have a fulfilling ministry in an unconventional career as a flight attendant. She brings to each flight a similar posture: thankful, gracious, joyful—not expecting anything, but treating each person, each experience, as a gift. 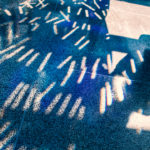 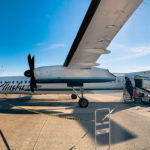 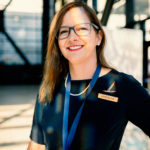 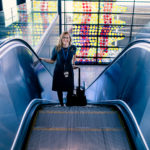 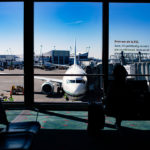 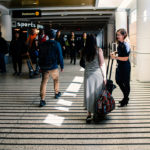 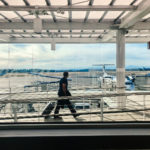 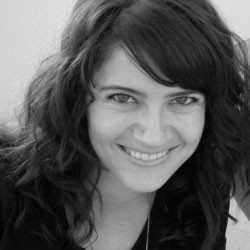