While munching on a tuna salad sandwich, she exclaimed: “Grandpa, the most important thing about the New Testament is that is where we learn about Jesus!”

I grew up in East Africa among the Zanaki people who had never heard of Jesus; they did not know about the special love of God revealed in Jesus that our granddaughter knows. They believed in God as creator, but they did not know his character for they believed that God had taken a journey and would never return. They had no notion that God is love. In fact, a nearby society believed that God was the leopard, and completely terrifying.

When my parents arrived within this society, they focused first on language study, and then my father, with an African colleague, set about translating the Gospel of Matthew into the Zanaki language. Three years ago my wife, Grace, and I took three of our teenage grandchildren to visit the village where my parents had served ninety years ago. The church was packed with some 700 people present. In the midst of the choirs, aged Mukami bent with arthritis came dancing down the aisle singing exuberantly, “This book tells all about Jesus.” She was holding high a tattered Gospel of Matthew. She was probably the fourth person among the Zanaki to believe in Jesus. As a young woman she had committed her life to Jesus and now in her aged years she was bearing exuberant testimony to the salvation revealed in her tattered Gospel of Matthew.

Twenty years after my childhood years living among the Zanaki, Grace and I and our family settled into Somalia, a Muslim society in northeastern Africa. One of my dear friends from those Somali years was Ahmed Ali Haile. On one occasion Ahmed and I were enjoying tea together, when he exclaimed, “How can I speak negatively of the Qur’an, when it is the Qur’an that planted the seeds in my soul to quest for the Bible and its message!”

“How did that happen?” I prodded.

Ahmed explained, “The imam in the mosque where I worshipped met us little boys in the evenings where he taught us Islam. He frequently commented that the Qur’an is one of several revealed scriptures. The other revelations are the Torah, the Psalms, and the Gospel. The imam also spoke highly of the Bible that God had entrusted to the Christians.”

However, the general consensus of the imams in Somalia was that it is likely that these former scriptures, which Christians refer to as the Bible, have been tampered with. For that reason the Qur’an is the most reliable scripture.

Ahmed mused, “Those comments planted a yearning to read all the holy books of revelation.” Ahmed doubted that God would permit any of his books to be tampered with. So he hoped that sometime he would find these other scriptures.

Then a terrific attack of malaria took me to the Christian hospital in my hometown in Somalia. When I improved, I asked the Christian nurse to give me something to read in English. She gave me the Bible. For the first time I had in my hands all the former scriptures that the imam had referred to. In the next two years I read the entire Bible through two times.

Those scriptures opened my heart to meet Jesus the Messiah. The day I believed in Jesus, I knew I had come home. Jesus the Messiah, as revealed in the Gospel, opened the door for me to receive the gift of salvation.

I travel extensively meeting Muslim-background believers. I ask these believers quite frequently, “How did you become a believer in Jesus the Messiah?”

Most often the response to that question is, “I acquired a Bible.”

When a Muslim meets the Second Testament, he or she is encountering a scripture that the Qur’an might have prepared him or her to receive. It appears that the Holy Spirit quite frequently uses the Qur’an as a stepping-stone toward Jesus. The Qur’an might have prepared a Muslim to consider the gospel message. For example, the Qur’an says surprising things about Jesus, including these: Jesus is born of a virgin; Jesus is a sign to all nations; Jesus is the Messiah; Jesus is coming back again; Jesus is without sin; Jesus fulfills the former scriptures; Jesus the Messiah is the healer; Jesus is the Word.

Within Islam, Jesus of the Second Testament is held in high esteem and he is the great mystery. Nevertheless, although Jesus is honored as a prophet, he is not the Savior. In Islam, we need instruction; redemption is not necessary. So among the many affirmations of Jesus within the Muslim community, there are also forthright disclaimers. For example, Jesus is the Word only in the sense that he is created by God; Jesus is the Spirit in the sense that God breathes his spirit into all life;1 it is impossible for Jesus to be crucified for the Messiah could not suffer on a cross; since there is no cross for the Messiah to bear, there is no resurrection victory. A Muslim scholar, Tarif Khalidi, observes that the Jesus of the Gospel is in conflict with the Jesus of the Qur’an. He asserts that the cross is the heart of the Second Testament message whereas in the Qur’an there is no cross.2 So when we view the Qur’an as an indication of truth that sometimes leads Muslims into a revelation of Jesus the Messiah, we also recognize that the Qur’an denies the incarnation, the crucifixion, and the resurrection of Jesus. Although there might be signs of the gospel within Islam, nevertheless, Islam is not the gospel.

This means that in bearing witness we never stop at the Qur’an. The Zanaki woman danced in joyous witness that the God who went away has in fact come to us in Jesus; the Qur’an does not invite us to share in that dance. Ahmed exulted when the Holy Spirit opened his heart to the revelation that God is love. So it is around the world in every culture and religious system. When people discover the Second Testament, they meet the revelation in Jesus that God is love.

There is a yearning in all religious systems to meet the One who is love. Poignantly, in a passage in the Qur’an called “the Table,” the disciples appeal to Jesus for the bread from heaven that sustains life continually. God responds, proclaiming that the table is spread!3 Surely this passage reveals a yearning for the Eucharist commemorating the eternal bread from heaven.

In the concluding message of the Second Testament we hear all of heaven and earth resounding with the good news that the gates of the great city are always open and the tree of life bursts forth with fruit for every season and leaves for the healing of all.4 Indeed the Table is spread! 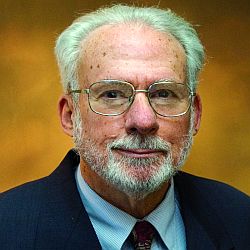 David W. Shenk was born to pioneer Mennonite missionaries in Tanzania. For sixteen years he and his wife, Grace, served within Muslim communities in Somalia and Kenya and then as pastor couple at Mountville Mennonite Church in Pennsylvania. David has also served in missions administration with Eastern Mennonite Missions and as academic dean at Lithuania Christian College. His interest in Christian peacemaking and faithful witness to Christ among Muslims has taken him into some 100 countries. He has authored, co-authored, or edited numerous books on themes related to the mission of the church in our pluralist world. At present he is Global Missions Consultant with Eastern Mennonite Missions with special attention to Islam.