As a lecturer and colleague of Tanya Riches I was grateful for the chance to read her article Worship Discipleship. The role of music in shaping a congregation, both affectively and through lyrical content, seems validated by her research as well as my own personal experience. My journey with the kind of worship arts she describes began in a Churches of Christ youth group in the 1990s, before studying at Hillsong College in 2008 and becoming a staff member in 2013. As a pastoral trainer specialising in Old Testament Studies I would not presume to comment on the sociological aspects of her work, but I would like to respond to some of her observations on liturgy through worship.

Riches describes Pentecostal worship as an orally transmitted culture, recording and reproducing liturgy across cultural boundaries. My experience with megachurch culture suggests that this is not unique to music; Hillsong’s resources include books, clothing, merchandise and enough media content to supply a 24/7 television channel. The association of church with a ‘brand’ and other marketing terms is an uncomfortable one for some Christians, and no doubt the possibility of commodified worship makes for an interesting conversation. However, it may be possible that the broader ‘consumer’ experience of Hillsong content has something to say to Riches’ argument.

In his work on the Psalms, Walter Brueggemann argues that biblical liturgy is less concerned with expressing a prescribed doctrine than with forming and performing a counter-world.  Without it, the surrounding culture forces the reader into an ideology of anxiety, self-interest and lack of meaning; but the Psalter offers an invitation to a world defined by the presence of Israel’s God. In the Psalms,

We come and hear and recite and sing and sense. And we are given cadences of another language with another reference that counters the claims of our dominant ideological system.[1]

Thus a Psalm-praying community works to embody this counter-world and bring it into tangible, temporal reality. Borrowing Riches’ terms, it could be said that orthodoxy, orthopathy and orthopraxy result from immersion into the world of the liturgy.

My suspicion is that something similar happens through the Hillsong liturgy, expressed primarily but not exclusively through worship music. A Young & Free remix album, a ‘Planet Value’ sisterhood T-shirt and a ‘Cross = Love’ sticker each represent part of a creative effort to imagine a counter-world. The world expressed through these examples may not be as ‘counter’ to our world as some would like it to be (the same may be said of the Psalms!), but their cumulative effect on the congregants’ thinking, feeling and doing is intentional.[2]

With that in mind, Riches’ method of drawing out lyrics referring directly to a topic could be missing the indirect ways the topic is handled in Hillsong’s worship. A ‘found theology’ of nonviolence and the ‘other’ may be better identified by examining its place within the counter-world proposed by the liturgy. In other words, participants form their views around nonviolence most effectively not when they sing about it specifically, but when they imagine a world in which it is re-contextualised. To illustrate this, I would suggest three key ideas that define this counter-world, and the ways in which participants’ views of the ‘other’ may be influenced.

Firstly, participants in Hillsong’s liturgy are met with a world of abundance. God’s gifts are presented as gracious and unlimited, to the effect that one’s expectation should be that there is more.[3] Critics inevitably associate this theme with prosperity preaching, but its implication for the ‘other’ is worth considering. Scarcity promotes competition and preys on the instinct to horde and steal; when creation is seen as an overflowing gift we need not covet what belongs to our neighbour. It could be argued that the counter-world value of abundance discourages violence through providing an alternative to greed.

Secondly, Hillsong’s liturgy proposes a world of wonder.[4] The wildness and unpredictability of creation is to be celebrated rather than feared or tamed. Life is presented as an adventure into the unknown, with congregants encouraged to embrace the new and unfamiliar. While this is rarely linked to inter-faith dialogue directly, the ethos of embracing the unfamiliar would presumably influence a believer’s thinking around the topic. Thus, interactions with the ‘other’ could be marked by openness rather than fear or suspicion.

Finally, the Hillsong liturgy describes a world of enacted victory. Believers are to see themselves as locked in a spiritual war with the forces of evil, living out the victory of Jesus through the violent imagery Riches alluded to in Worship Discipleship.[5] While I have suggested that the first two pillars promote a positive alternative to the surrounding culture, this one may actively hinder engagement with the ‘other’. Riches argues that these images are spiritual in nature and unrelated to human enemies.

However, it seems to me that the expectation of spiritual warfare would influence the way in which natural opposition from outside the church is received.  Hillsong Church has a complex and at times adversarial relationship with some sections of the Australian media, which can lead to an ‘us v. them’ attitude within the congregation.[6] The distinction between spiritual enemies and human ones is less clear when this occurs; perhaps more cruciform atonement images would help in this area.  A God who disarms His enemies with a cross rather than crushes them with His heel could set a better example for engaging with external opposition.

In conclusion, the central thesis of Riches’ article that worship music can move Christians toward orthodoxy, orthopathy and orthopraxy seems justified. No doubt this is influential to the way participants view the ‘other’ and their obligation to become peacemakers as the article describes. In response, I would suggest that the liturgical work of Hillsong music could be thought of as world-building rather than doctrine-teaching, and that the view of the ‘other’ be identified within the counter-world proposed in the act of worship. Through imagining a world of abundance, wonder and sacrificial victory the creative arts could see an increase of peacemakers among their disciples.

[1] Brueggemann, Walter. From Whom No Secrets are Hid: Introducing the Psalms, Westminster John Knox Press, 2014. p14.

[2] Catalogues in which merchandise is advertised at conferences frequently offer to ‘Bring Conference Home With You’, suggesting something of the week’s experience is encapsulated and transported in the resource.  Pastor Bobbie Houston also references the Sisterhood merchandise as a way of bringing the Sisterhood experience outside of the weekly gatherings (see for example  https://hillsong.com/collected/blog/2017/12/ making-much-of-jesus-our-global-sisterhood-united-nights-in-pics/)

[3] 2018 saw the release of an album by Hillsong Worship, a book by Global Senior Pastor Brian Houston and a church conference with this title.

[4] A 2017 studio album and lead single with this title was released by Hillsong United in 2017.  In addition, Hillsong worship songs and conference promotions frequently employ untamed natural imagery (eg, Might Sound Wild (2019), So Will I (2018) and You Crown the Year (2013)).

[6] See for instance the lyric ‘Say what they want, say what they want…we are free’ from 2008’s Your Name High.  The preceding year had seen a noticeable rise in tabloid stories criticising Hillsong Church, often unfairly. 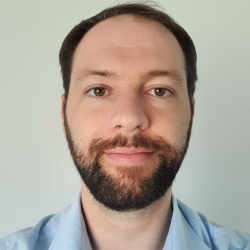 Paul McGhie teaches Biblical Studies at Hillsong College and has attended Hillsong Church for the past twelve years.  After completing his Bachelor of Marketing and working briefly for the Defence Force, Paul studied theology at Alphacrucis College and then completed a masters’ degree at the Catholic Institute of Sydney. He currently lectures the Old Testament in both the Vocational Education and Higher Education Stream.