John Goldingay has established that ancient Israel did not deny that the other religions reflect truth about God. However, that does not lead to a conclusion that all religions are the same and that all paths lead to God. The First Testament was convinced that other religions are “always in need of the illumination that can come only from knowing what Yahweh has done with Israel.”

While pluralism is a rather new experience for the West, it is not for a Christian in India. Besides the various traditions that differ and even conflict with each other within Hinduism, an Indian Christian is also exposed to Zoroastrianism, Judaism, Islam, and Baha’ism. This experience necessitates that an Indian Christian approach the issues differently than those who are in the West.

Any Hindu, Buddhist, Jain, or follower of one of the numerous eastern Gurus will be comfortable with the idea that there is some illumination or truth in other religions, including Christianity. This accommodation is fundamental to the Indian religious psyche. The most persuasive statement of this principle comes from Mahavir, the founder of Jainism, who proposed the principle of Anekantavada.1 Anekantavada, roughly translated as “non-absolutism,” holds that truth is beyond human comprehension. According to Mahavir, truth claims are relative and partial. From this perspective, the understanding of a partial truth claim leads people to a lifelong quest for truth. This view is best explained by the parable of the elephant and the blind persons where each person describes an elephant through his or her partial experience. The problem is that the elephant is bigger than the partial explanations. The real picture emerges only when the blind people put all their narratives together.

Since all truth claims including one’s own can be regarded as partial and biased, other truth claims can be tolerated in a similar way—as part of the complete truth. Without the partial truth of others, one’s own truth will remain partial. However, despite these limitations they are useful as essential building blocks for constructing the whole. This led Swami Vivekananda, one of India’s great thinkers, to say, “Let noble truths come to us from all corners.” For the Indian mind, truth claims of other religions are not threatening but enriching. Another 20th-century example is Mahatma Gandhi, who titled his autobiography, My Experiments with Truth. The Hindu mind is set on a never-ending search for truth. Truth is something that can be pursued, experimented with and explored.

So, principles of accommodation make life easy for an Indian Christian in a pluralistic Indian society. I am not ignoring that there is opposition to the preaching of the gospel in India. I am only looking at the philosophical aspect of the issue and not the political realities. However, the latter points out a significant challenge in relation to the second aspect of Goldingay’s proposition: “these religions [are] always in need of the illumination that can come only from knowing what Yahweh has done with Israel.” I am not questioning the validity of Goldingay’s finding, but trying to highlight the challenges it poses to a Christian in a pluralistic society.

From an Indian perspective, this exclusive claim of the Bible and thus of Christianity turns out to be patronizing. It is a claim of superiority, which the Hindu mind finds difficult to tolerate. The situation in a pluralistic society like India is different from that of Mars Hill of Paul’s time. Paul took advantage of ignorance explicit in the Greek religions when he said, “What therefore you worship as unknown, this I proclaim to you” (Acts 17:23 ESV). But in the pluralistic landscape of India there are no gaps to fill—there is only room for enriching each other. So, we need to find some way of connecting Christian faith narratives with those of others. They should be connected in such a way that they lead to the God of the Bible who calls people to him through Jesus Christ.

There are two possible ways of connecting our religious discourses depending on what type of conjunctions one would like to use. The choice seems to be between “no, but” or “yes, and.” The first choice is to see a discontinuity between world religions and Christianity. The second is to see Christianity as the fulfillment of human longing that other religions witness to. Indian Christian theologians reflecting on the Indian religious plurality have been on both sides of this divide. These include Hendrick Kraemer, Karl Barth, Stanley Samartha, Raimundo Panikkar, Pandipeddi Chenchiah, and others.

Leaving behind some of the philosophical issues, I would also like to reflect on the practical aspects. How does a Hindu receive the Christian gospel? As someone raised in a pluralist society, my experiences have been different from those of my colleagues in the West. I was raised in a traditional Christian home, attended a Christian school and college. I had Hindu and Christian teachers who influenced my life. The curriculum had readings from Hindu epics; even our language is enriched with idioms and metaphors from Hindu scriptures. Neither my Christian parents, the Christian management of the school, nor the college I attended found exposure to these issues threatening.

As the pastor of a small but growing congregation, I share a common space with many Hindus, Parsis, Jains, and Buddhists. For the businessmen with whom my congregation shares a shopping mall, we are not considered a threat. Some of them even told me that the “positive power” of our prayers is helping their business to grow! It would have been a different experience if my church was situated on a huge church compound with high walls and a tall steeple. My struggle is not that my truth is challenged but that it is readily accepted, and therefore, there is little room for debate. If ever I face resistance it has to do with the form of Christianity that my friends are familiar with and not with the essence of what I believe and proclaim.

This point is very well summarized by a teacher of mine from my school days who influenced my life and thinking most (aside from my language skills). He was a high-caste Brahmin and a Sanskrit scholar. “Christianity is an Eastern religion!” He said, “but what we see now is its reflection in a Western mirror.” For him as well as many like him in India, the problem is not with Christianity but the mirror! For over 300 years most of the cultures that have been historically religiously pluralistic have accommodated Christianity, but its image in the Western mirror prevents them from embracing it.

[1]The main sacred text in Jainism is the Agamas; see http://www.hindupedia.com/en/Agama. 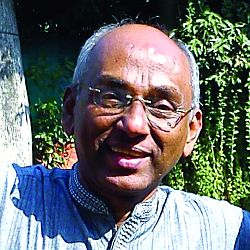 Paulson Pulikottil is on the faculty of Union Biblical Seminary, Pune, India. He has a PhD from Sheffield University, UK.