The story of my life in Christian ministry could be summed up as hearing and telling stories—listening to stories of other people and then relating the story of Jesus so that in some way they can link theirs with his. I have especially enjoyed this challenge when the stories I have heard come from a faith perspective different from my own.

During my seminary days and while pastoring a church in Arizona, I dreamed about serving in a foreign country, perhaps Peru or Nepal. But the answer to my prayers was not to be some far off exotic place, rather, a move just one state to the north. The mountains I have looked up to are not the Andes or Himalayas, but the Wasatch Range in Utah. So a good number of the stories I have heard over the past forty years have come from those with a Latter-day Saint background. In recent years, however, Latino immigrants from countries like Peru and refugees from camps in Nepal, along with people from many other Asian and African nations, have been coming to Utah in significant numbers. And this has given me many opportunities to interact with Hindus from Bhutan and Muslims from Iraq.

Mindful of this story-characterization of ministry experience, I immediately resonated with the prominence John Goldingay gives to the narrative nature of biblical faith and its relevance for religious dialogue. That same emphasis emerges in the other lead article when Nijay Gupta notes Lesslie Newbigin’s insistence that the focus for interfaith dialogue must be the story that conveys the meaning and goal for our lives as humans. Following the quotation cited by Gupta, Newbigin continues: “Therefore, the essential contribution of the Christian to the dialogue will simply be the telling of the story, the story of Jesus, the story of the Bible.”1

To engage meaningfully in that level of storytelling requires trusting relationships. In my experience, the simplest and easiest way to cultivate such relationships is by an exchange of “lesser” stories—stories of a shallower though not necessarily insignificant nature. For example, with Latter-day Saints the question, “Have you lived most of your life in Utah?” seems superficial and safe, yet it has often opened opportunities for them to relate a lot about their Mormon roots, which can often go back to their ancestors who came as refugees from persecution in the Midwest. I in turn can reciprocate with stories from my religious background and identity.

Given their propensity to hospitality, “get-acquainted” conversations with Iraqis and the Bhutanese have frequently taken place in their homes over a cup of tea or some other beverage. The mere extension and acceptance of their invitation creates a context of trust, and conversation flows easily from food preparations and preferences to stories about making adjustments in a new environment.

Refugees arrive with stories for which I have no parallel to tell. Whether it has been years in a crowded camp or a recent flight from violence, life has been harsh, hazardous, and not infrequently traumatic. I can only listen, but an empathetic ear does enhance trust.

With Iraqis there is at least one event to which we both relate even though our involvements in it are hardly comparable—the United States’ invasion of their homeland. To hear (and tell) the differing perspectives on this event has been most fascinating. Saad is a Shiite who wholeheartedly welcomed the invasion; he served as the bureau chief for the USA-backed news agency in Baghdad until seized and nearly executed by a militia. Azad, a Sunni, was a general in Saddam Hussein’s army who fled to Egypt when the Ba’athist government was overthrown; he had long believed that without a forceful, strong-armed leader, chaos would reign. Suhad, a young woman who knows both men well, shakes her head and asks, “What’s your choice—freedom or stability?” Salim, a construction contractor, mourns the current corruption that undermined his Baghdad skyscraper building business. And Muhammad Rasheed can relate his experiences from a Kurdish, northern Iraq perspective.

While such stories hardly qualify as interfaith dialogue, they do begin to deal with values and issues that one’s faith informs. Such stories also open the door to exposing our deepest hopes and fears, and when trust reaches a level for that to take place, authentic interfaith dialogue can happen. There may be, to be sure, intermediate steps. It feels less threatening, for example, to relate to some aspect of our religious rituals, as in the story of Jesus and the Samaritan woman (the dialogue model Gupta utilizes). Salim invited my wife and me to share in the breaking of the fast with his family during Ramadan. Dina Rizal, a Hindu of the Brahman caste, welcomed us to join his family sitting in a circle on the floor as a priest read from Sanskrit parchments, a ceremony blessing Dina’s daughter’s on her fourth birthday.

Stories from the Qur’an, the Bhagavad-Gita, the Book of Mormon, or the Bible can be told in ways that do not involve us directly or personally. The same could be said for anecdotes from our faith community or an account of a close relative’s faith journey.

All the above “lesser” stories could be interpreted as evasions or an avoidance of the “essential” story Newbigin says should be a Christian’s contribution to the dialogue. I would rather agree with Gupta and see them as stepping-stones, “positive contributions on the way toward embracing the Christian gospel, rather than simply obstacles.” Attentive listening to accounts of the traditions, scriptures, experiences, and even (or especially) the “essential” story of someone from a different faith can enable us to tell the gospel story in a more engaging way.

This listening is not the sort that is preoccupied with finding flaws and faults and making mental notes for a rebuttal or refutation. I fear this has been the predominant approach in many evangelical dialogues with Mormons. For example, I have read countless articles and newsletters that seek to detail and document discrepancies in Mormon history, inconsistencies in their theology, the folly of certain customs, or hypocrisy in their lifestyle. And I know how tempting it can be to use this material trying to win arguments and establish the superiority of my faith. But this does not win friends or followers of Jesus; it is not the more engaging way. Both lead articles note how both Testaments discourage this. Goldingay points us to the “Yahweh’s witnesses” texts in Isaiah 40–55: “The prophet did not encourage Israel to compare its religion with the Babylonians’ and feel superior.” Gupta explains what Jesus did in dialogue with the woman at the well, noting we should “deconstruct the compare-contrast approach.”

To what then should we be attending as we as listen? I believe we are to attempt to see life as our dialogue partners are seeing it, and to seek to be sensitive to those longings for which they are seeking fulfillment in their faith. To be sure, we must not assume we can read minds or interpret emotions, but we can express what we perceive and ask if we are anywhere near accurate. Empathetic listening can enable us to tell the Jesus Story in a way that he engages them at the point of those longings.

I am struck by how ready the people I relate to are to talk about Jesus. Mormons, of course, assert that they are “the Church of Jesus Christ of Latter-day Saints.” And over the forty plus years I have lived among them, I believe many have become increasingly conscious that the central message of their Book of Mormon is the grace Jesus offers and that relating to him must have a center place in their religious quest. I have also been surprised by the high regard given to Jesus in the Qur’an. And in the Bhagavad-Gita, the central character, Krishna, appears to be a Jesus-like figure coming as a god incarnate and a wise counselor/teacher as he talks with Prince Arjuna and drives his chariot. This is not to minimize the significance of who Jesus Christ is according to the biblical story, but to take note that talk about Jesus is neither a novel notion nor a taboo topic.

How then can I best tell “the Story”? To begin with, I do not feel compelled to pause and point out where the Qur’an, Book of Mormon, or a Krishna character gets it wrong, nor at those key points to inflect my voice in such a way so as to be sure they do not miss the correct account. I agree with both Goldingay and Gupta that the Christian gospel will have an excluding edge, but at this juncture my hope is that my listeners will feel they are included in the story—God’s love in Jesus is for them too—and not be put back on their heels, feeling they must defend their variation of the story.

There are other means for communicating the story without my being the one to tell it. The Jesus Film Project has translations of their video dramatizing the Gospel of Luke in both Arabic and Nepali, the languages spoken by my refugee friends. I also found an Arabic translation of Luke that is especially sensitive to Middle Eastern Culture. I wrote a short tract based on John 3:16 which Subash, a Bhutanese Christian friend, translated into Nepali. I have handed these out and trust the Spirit is using them.

Still, dialoging in person has advantages. It makes possible a highlighting of those aspects of all God has done in Christ that most meaningfully relate to friends who have trusted me enough to share their deeper hopes and fears. Also, I can then relate the story of how I came to find my place in the Jesus Story and how they too may be included. 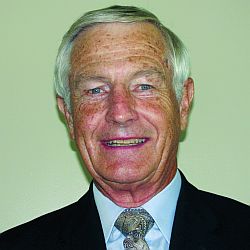 Bill Heersink has lived with his wife, Claire, in Utah for over thirty years, working as a pastor and as a professor of intercultural studies at Salt Lake Theological Seminary.