Interfaith dialogue and the issue of pluralism are crucial today, if for no other reason than the survival of many people may depend on getting it right. So I applaud many of the points that Kärkkäinen makes in his position paper, beginning with his insistence that doctrine and theology should not be trivialized nor made the sole focus in our discussions with advocates of other faith traditions.

There is much else to appreciate in what Kärkkäinen puts forth. He acknowledges the two biblical assertions that must somehow dance with each other—that God desires all to be saved and that salvation is found only in Jesus Christ. The way in which one juxtaposes these assertions yields the three “classical” positions that Kärkkäinen enumerates: pluralism emphasizes the former assertion in such a way that it compromises the latter; exclusivism (which I prefer to label “particularism”) stresses the latter assertion such that it qualifies the former; and inclusivism straddles the two assertions. Kärkkäinen seems to favor the middle option of inclusivism.

It would be nice if all three positions could agree with Kärkkäinen’s insistence that we must allow the Other to be the Other. That is, we must not minimize or deny real differences between religions. To suggest that we are all just saying the same thing or pointing to the same reality with different cultural conceptions is pretentious and does violence to the integrity of the Other’s religion. Sadly, pluralists (such as John Hick) are often guilty of such imperialism.

It seems, then, that Kärkkäinen would reject the pluralist approach and narrow our options to inclusivism and particularism, for he ultimately rejects a pluralistic theocentrism (with which he seems to begin). I applaud him when he insists on the non-negotiability of the Christian confession of Christ’s full divinity and humanity and of the Incarnation, the trinitarian nature of the establishment of God’s Kingdom, and the indispensable role of the church toward the Kingdom’s completion. In other words, Kärkkäinen can insist that salvation belongs only to our God and that the church’s role is to proclaim this to and for all, which we are to do as persuasive witnesses who speak the language of testimony. We are not to argue the case like a defense attorney, nor as judges who decide the case for the world, nor as mere reporters who try to get the facts right.

All of the above I applaud in Kärkkäinen’s position paper. However, though I am not wholly in favor of exclusivism, Kärkkäinen’s tendency to lean inclusive raises some issues for both a theology of religions and the Christian attitude toward interfaith dialogue.

First, Kärkkäinen agrees with the statement that “our theological understanding of religious plurality begins with our faith in the one God who created all things….” While it is true that humans made in God’s image possess a sensus divinitatis, and while it is certainly true that God is the God of all nations and peoples, God is this God through the particularity of the people of Israel and the faithful Israelite, Jesus Christ. In other words, Kärkkäinen’s beginning point is not specifically Christian; that specificity comes later in his paper. It would be better to begin a Christian understanding of religious plurality not with our faith or with “the one God who created” (who could be the God of Deism, for instance), but with the faithfulness of the God who has disclosed himself in Jesus Christ. In other words, if we begin where Kärkkäinen suggests, then we might start with the wrongheaded assumption that the Deist, Muslim, and Christian are entering into the dialogue with the same conception of God. We must come to the table not merely with a faith in the Creator God, but as a people shaped by the Redeemer God through whom we rightly understand the identity of the Creator.

Second, the Christian must also come to the table with a conviction about the noetic effects of sin (a conviction that Kärkkäinen implies he acknowledges from Romans 1). That is, we cannot be as optimistic as some are about the conception of God that is assumed to be universal. As Paul argues in Romans 1, it is not simply that people are without excuse because they have known God through creation, but rather they distort that knowledge and actually end up worshipping a conception of the creature’s mind rather than the Creator. (Compare Paul’s point in 2:14-16.) Does this mean that those without the special revelation of Christ and Scripture are in a hopeless situation? Not necessarily, since a sovereign God has the prerogative of self-disclosing to whomever, whenever, and wherever God chooses. But that would seem to be the exception. In fact, taking Romans 1 seriously, it may be more likely than not that other religions tend away from rather than toward the God revealed in Jesus Christ.

This leads to a third concern I have with Kärkkäinen’s “theology of religions.” I am not as sure as he is that Scripture explicitly portrays “pagan saints” who know “quite a lot about God even without special revelation.” For instance, Kärkkäinen appeals twice to Paul’s engagement with the Areopagus in Athens as an example of how the early church dealt with the “dynamic tension between the dark picture of humanity in Romans 1 and the affirmation of the relative value of religiosity” that involves the “complex nature of the continuity and discontinuity with regard to (other) religions.” Paul’s approach in Acts 17 is often held up as the stellar example of a kind of interfaith dialogue in the New Testament. But I think this passage can be taken in just the opposite way—namely, as Luke’s account of the meager results from the one time that Paul did not begin with the particularity of the God revealed in Israel and in Jesus Christ. Luke indicates that only a handful believed (v. 34), and in the rest of Acts and Paul’s epistles we never hear of a church in Athens. As a result, I have never understood why we want to lift this up as an example of the way we should engage other religious perspectives by beginning with some general conception of a “god unknown” (or, as Stanley Hauerwas labels it in Prayers Plainly Spoken, “the god of ultimate vagueness”).

In fact, Luke’s account of the (literal) riot that the Christian gospel caused in Ephesus when it came into contention with another religion (the cult of Diana; see Acts 19) and Paul’s reprimand of the syncretistic faith of some Colossian Christians (Col 2:8-23) does not bode well for an optimistic encounter with the “pagan saints” of which Kärkkäinen believes there are “numerous biblical examples.” In fact, it would be helpful if Kärkkäinen provided a parenthetical list of these examples, since I suspect most of the ones that turn out well (i.e., who end up knowing “quite a lot about God”) are actually recipients of some form of special revelation.

Finally, I take issue with Kärkkäinen when he admonishes the contemporary secular mindset for confusing tolerance with the lack of commitment to any belief or opinion. He bases this on the etymology of the word “tolerance,” about which he is correct. It did mean “to bear a burden” (or to bear pain or hardship), but if we took a poll, I believe we would find that that is not how the word is used or understood by our contemporaries. Instead, when folks today say we should “tolerate” each other’s religious or political views, they usually mean something like this: “I’ll put up with you if you’ll put up with me.” And that is far less than what is demanded of the Christian who is commanded to love and to be a neighbor to anyone who crosses her path.

This brings us back to the start—beginning a “theology of religions” and interfaith dialogue not with a pluralistic theocentrism, but with an unswerving commitment to the God revealed in Jesus Christ, the allegiance to whom does not preclude genuine dialogue, but actually opens up dialogue with those with whom we differ. Such a commitment to the Christ of the Gospels actually mitigates any attitudinal exclusivism on the part of those claiming to follow a Christ who permits no smug self-righteousness, triumphalism, or indifference. The more we are committed to confessing the God revealed by the Christ of the Gospels, the more we are committed as a community to a faith that stresses service to the members on society’s margins, moves outward in mission, and respects the freedom of the Other to reject our proclamation, just as Christ’s opponents were free to crucify him. 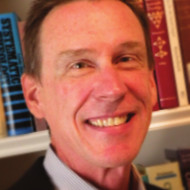 Dennis Okholm has an MDiv and an MA (Church History) from Trinity Evangelical Divinity School and a ThM and PhD in Systematic Theology from Princeton Theological Seminary. He is a professor of theology at Azusa Pacific University (Azusa, CA) and is also on the pastoral staff of St. Andrews Presbyterian Church (Newport Beach). He has participated in several interfaith discussions over the years, and in the past two years he has been involved in dialogue with academic peers in the Mormon church.