Witness and Boundary-Maintenance in Evangelical Approaches to New Religions

As an undergraduate at Moody Bible Institute, a prominent evangelical Bible college, I was required to take a course entitled “Personal Evangelism.” The course set out to increase effectiveness in “soul-winning,” part of which involved mastering techniques specifically targeted toward members of cults. Indeed, an entire section of the course was shaped by a required text called What the Cults Believe, written by Irvine Robertson. I remember becoming fascinated at the time with the dangerous esoteric knowledge to which I was becoming privy. As it was narrated to us, these cults—encompassing everything from Mormonism to Eastern-influenced spirituality to Rosicrucianism—were not simply new forms of “lost” religions; rather, they were manifestations of Satan’s ever-changing forms of cunning.1

A course on personal evangelism certainly follows from D. L. Moody’s legacy. Yet, looking back, two questions immediately come to mind. First, why construct the category of “cult” as a special point of emphasis for evangelism, and second, how does a group come to be assigned to this category? John Morehead’s piece on the contours of the evangelical countercult movement sheds some light on these questions. As he points out, the heresy-rationalist approach to new religious movements is deeply embedded in the history of American evangelicalism. This model follows from the rationalistic biblical presuppositionalism that has largely defined traditional evangelical theologies of religion. That is, evangelicalism’s traditional inerrantist approach to Scripture has engendered a privileged view of evangelical interpretations of Christology, soteriology, and other systematic theological categories. This viewpoint, Morehead rightly claims, positions evangelicalism over against other religions, and even other forms of Christianity, engendering an impulse to reify one’s own position by falsifying competing claims.

This does not address, however, the question of why cults receive special attention in this process of falsification. Why was there not in my course a separate unit on Islam or Hinduism, rather than on “cults” such as Baha’i and Hare Krishna (which borrow from elements of Islam and Hinduism, respectively)? To answer this, I will first approach the second question I posed above regarding what qualifies a group as a “cult” in the evangelical countercult movement. Morehead asserts, “the group’s perceived danger to the church appears to be the criteria that determines which ones receive attention and critique.” The obvious question here, then, is why certain groups are perceived to pose a greater danger to evangelical Christianity than others? In the book I referenced above, Irvine Robertson affirms the following definition of a cult: “any religious group that differs significantly in some one or more respects as to belief and practise from those religious groups which are regarded as the normative expressions of religion in our total culture.”2 Despite the claim of the heresy-rationalist approach that all truth claims must be tested by Scripture alone, this definition appears to endorse a culturally relative understanding of what constitutes religious legitimacy. In fact, by this definition, the Christian Dispensationalism that emerged in the United States in the latter half of the nineteenth century could be considered a cult, insofar as its hermeneutical approach to Scripture diverged significantly from normative Christian orthodoxy. Yet Dispensational theology has had considerable influence in evangelical Christianity and, if not deemed credible by all, at least it is typically not considered heresy on par with a “cult.” Indeed, the very book on cults I have been referencing is produced by Moody Press, the publishing arm of a Dispensationalist Bible college.

It therefore appears that the category of “cult” is a highly arbitrary construction, one whose creation requires some additional motivation to mere zeal for the protection of orthodox Christian truth. Robertson provides a hint as to what this could be when he writes in his introduction, “our consideration will deal mainly with the cults that are pseudo-Christian and with others that impinge upon the true Christian as well as the nominal Christian.”3 His concern, in other words, is less with systems of belief that are at this moment in history considered culturally legitimate and self-contained “religions.” Certainly members of other religions are to be evangelized, but for Robertson and other countercultists, the larger danger seems to lie in the religious hybridity of groups that borrow from and alter tenets belonging to “legitimate religions.” Further, this danger is particularly acute when Christianity is the subject of this corruption.

In her famous work Purity and Danger, Mary Douglas argues that purity insists that categories remain distinct or one is presented with the danger of chaos. To illustrate this point, she examines the abominations listed in the book of Leviticus, which, at first blush, seem highly arbitrary. For instance, the pig—cited in Leviticus 11 as unclean—has “divided hoofs and is cleft footed” but “it does not chew the cud” (Lev 11:7 NRSV). This alone hardly renders a pig literally filthier than other animals. Yet the chapter begins by stating, “Any animal that has divided hoofs and is cleft-footed and chews the cud—such you may eat” (Lev 11:3 NRSV). Douglas contends it is the fact that pigs, and the other animals rendered unclean, do not perfectly conform to a divinely sanctioned category (e.g. animals with cleft feet, divided hoofs, and that chew the cud) that makes them impure.4 In short, they confound boundaries. Likewise, in their challenge to traditional religious dogma, religious hybridities—particularly “pseudo-Christian cults”—present the danger of chaos to sanctioned, evangelical boundaries. Douglas writes, “margins are dangerous” because “any structure of ideas is vulnerable at its margins.”5 She contends,

Purity is the enemy of change, of ambiguity and compromise . . . the final paradox for the search for purity is that it is an attempt to force experience into logical categories of non-contradiction. But experience is not amenable and those who make the attempt find themselves led into contradiction.6

I believe this is why the countercult movement maintains such sustained attention in evangelicalism. A relative newcomer on the Christian scene itself, evangelicalism, as noted above, has historically been particularly interested in maintaining and legitimizing its own boundaries. Christian hybridity therefore presents a special danger to established evangelical doctrinal categories. This threat is interpreted by countercultists as a special form of Satanic cunning precisely because it mixes categories, a move that is perceived as shifty and tricky.

What, then, is a more fruitful way forward? I believe Morehead is right to support a dialogical approach, which would “replace a hostile with a benevolent faith identity.” An obsession over who is in and who is out has the consequence of a confrontational mode of evangelism that, in the end, diminishes witness. Though my “Personal Evangelism” syllabus used the terms witness and soul-winning interchangeably, there has been a shift among some evangelicals from proselytization to a more holistic form of witness, one that is lived rather than done. Indeed, while Morehead challenges the veracity of the countercultist claim that the heresy-rationalist apologetic wins more converts, I would go further to argue that such a utilitarian approach to evangelism is problematic in its presupposition that the number of converts is an indicator of success. Jesus did not run after the rich young ruler to convince him that his logic was flawed. Rather, he lived the gospel through word and deed and issued gracious invitations for others to join him. For us to share in this model is to trust in the work of the Holy Spirit rather than understanding ourselves to be marketers for God.

Morehead’s call for “a greater attention to the New Testament’s Christological hermeneutic . . . for the theological foundations of a grace-shaped engagement with new religions” strikes to the heart of this form of witness. If evangelicals shift the evangelistic focus from threatened boundary-maintenance to the embodiment of love of God and neighbor, then dialogue becomes a natural form of witness. There is, of course, risk here that comfortable boundaries will be contested. The late missiologist David Bosch has illustrated this possibility in his interpretation of the Cornelius story in Acts 10:1–11:18. He renames the story “The Conversion of Peter,” who was astonished that salvation extended not only to Jews, but to Gentiles as well. From this scripture Bosch asserts that in the act of witness, Christians must be prepared to be changed, to have one’s understanding of Christ be challenged and one’s faith corrected.7 Yet if we look to the Jesus of the Gospels, this type of boundary-altering encounter was his modus operandi. He was constantly challenging the neat and tidy constructs of those he encountered. It might just be, then, that dialogue—both with members of established religions and “religious hybridities”—is not only a new way forward in terms of outward witness, but perhaps also a spiritual discipline to which we are all called as disciples of Christ.

4Mary Douglas, Purity and Danger: An Analysis of Concepts of Pollution and Taboo (New York: Frederick A. Praeger, 1966), 54–55. 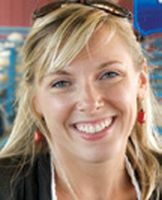 Sara Williams is a doctoral student in religion at Emory University, where she focuses on Christian social ethics. She also currently works with the Carter Center on programming related to religion and human rights and serves on the advisory board for 1000 Cities, part of the Society for Scriptural Reasoning in North America. Sara has worked with a variety of NGOs and nonprofits in various capacities. Most recently, she was the assistant program manager for Loaves and Fishes, a food pantry that serves the food insecure in the Greater New Haven area. She has also previously worked in fundraising development for the Veritas Forum and the Carter Center, as a fellow in International Justice Mission’s Uganda Field Office, and as a social worker with low-income families in Chicago. Sara holds a Master of Religion from Yale Divinity School, a Master of Social Work from the University of Georgia, and a Bachelor of Arts from the Moody Bible Institute. In her spare time, Sara likes to play with her dog, garden, and volunteer in her fabulous Atlanta neighborhood, Cabbagetown. You can read more of Sara’s musings on interreligious and ethical matters at www. stateofformation.org.