Cheong’s article introduces the complexities of religious authority in the computer-mediated society. She aims at raising awareness of the many fronts in which the digital age requires systematic investigation and well-informed reflection. The many possibilities and innumerous questions that her article presents can make one dizzy, even on the verge of overloading. A sense of being overwhelmed summarizes the current condition of religious leaders and officials with whom I am in contact. The challenges they face in their work relate to the inescapable necessity of technological adoption, the exhausting learning curve, and the ever-elusive innovation required. Cheong rightly points out how the new coronavirus pandemic has accelerated this process. She writes that the pace of technological adoption “seems to be outstripping capacity” for more in-depth reflection of the significant implications of broader adoption and pervasiveness of computer-mediated technologies in society. Her article is a vital contribution and invitation to thoughtful dialogue.

She chooses to engage the issue of power in faith communities. Cheong approaches the topic by looking at religious leaders and how they deal with influence and authority. Her article’s strength is that she presents a balanced discussion showing how both new media can help increase the religious leader’s authority and challenge it to its core. Rethinking religious authority in the digital age is significant because it has been forced to dislocate and shift. Manuel Castells proposes that the emergence of the computer-mediated Network Society (Blackwell Publishers, 2000) rebalances power, thereby increasingly moves to digital nodes or actors. In the network society, power is horizontal, pushing institutions and individuals to share it. Religious institutions and religious leaders are not immune to this shift.

My current research on the intersection of emerging adults, communication technologies, and Islam in the Arabian Peninsula supports the notion of religious adherents selecting authoritative religious sources, ascribing meaning, and assigning value to them. This personal process confers authority to religious sources. It raises questions of the place of persons as power brokers of religious authority. While religious figures adopt digital tools and strategies to expand influence and even control, how people exercise their power remains an open question. For example, Gary Bunt, in his book Islam in the Digital Age (Pluto Press, 2003), detects that Muslims in search of a legal opinion from scholars, seek alternative experts to find a match to their expectations. He concludes that there are new notions of authority and identity evidenced in the fact that persons transcend traditional cultural-religious boundaries by going online.

My research looks specifically at how the interactions in a computer-mediated society affect meaning-making in Islam. An emerging adult female Muslim I recently interviewed narrates how she collects legal opinions (fatwa) that support her attempts to negotiate with her family. She reaches out to online fatwa services and presents them to her family as proof (dalil) in contested matters, such as traveling abroad by herself or attending a mixed-gender university. In both cases, as well as others, she persuaded her family to change their traditional cultural-religious views.

Meaning-making is at the core of religious identity formation. Power, as influence and authority, is an intrinsic part of this process. I have interviewed over a dozen emerging adult college students in the United Arab Emirates, a country that is one of the most wired nations due to a state of the art infrastructure that allows pervasive participation in the digital network. Local Emirati participants indicate they increasingly depend on personal analysis and decisions in meaning-making in Islam. The computer-mediated network is a significant new dimension where they find new sources and resources for their religious lives. They make the case that religious references must be the evidence that convinces them of every aspect of their religion. And, ultimately, they are to judge which voices will influence their religious meaning-making. They negotiate their faith in digital hybridity, which is an expanded reality of online-offline, the significance of which Heidi Campbell and Mia Lövheim have argued, blurs the boundaries between the digital and the non-digital domains.[1]

There is no doubt that the emergence of new media is changing the global religious landscape. Computer-mediated networks and other technologies (such as the fascinating artificial intelligence examples mentioned by Cheong) function both as complementary and contradictory to dominant structures of religious power, or any power structure for that matter. The instigating questions raised by Cheong are not so different from those evoked by the retail industry, for instance, with regard to the rise of online shopping and the future of small businesses.

The horizontalization of power in the digital age has, so far, been a mixed bag. The power harnessed by religious leaders’ adoption of new technologies have produced a diversification of viewpoints and some decentralization of traditional authority. At the same time, it has also contributed to the rise of religious extremism, often combined with political perspectives, and subsequently devastating consequences. Although extremism in Islam often dominates media headlines, this notion applies to all major religious traditions. A case in point is the recent rise of right-wing political ideologies combined with the so-called Christian “traditional family values” in Brazil, which has led to the destruction of property, intimidation of leaders, and violence against minority religious groups. Within an era marked by the rapid emergence of technology, religious leaders often find new powers and challenges while religious adherents are seemingly emancipated by an infinitude of new possibilities, the results of which, do not always produce more sophisticated religious views and attendant communities.

The challenge of the future of authority in religion rests on understanding how religious leaders are affected by new technologies in the exercise of power and how, in turn, religious adherents will select authoritative religious sources, ascribe meaning, and assign value that confers authority. Lastly, due to the emergence of computer-mediated realities, the entire community of faith, including its religious leaders and adherents, is responsible for reflecting on the deeper and broader transformations occurring in our societies. 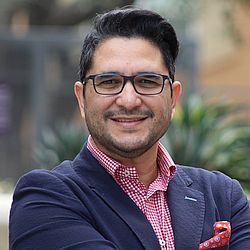 Paulo C. Oliveira is a Ph.D. Candidate in Intercultural Studies at Fuller Theological Seminary in Islamic Studies. His research explores and reflects missiologically on the intersection of communication technologies, emerging adulthood/young people, and faith, particularly the Islamic faith. Over two decades of cross-cultural ministry experience, both in Christian and Muslim majority contexts, informs his work.